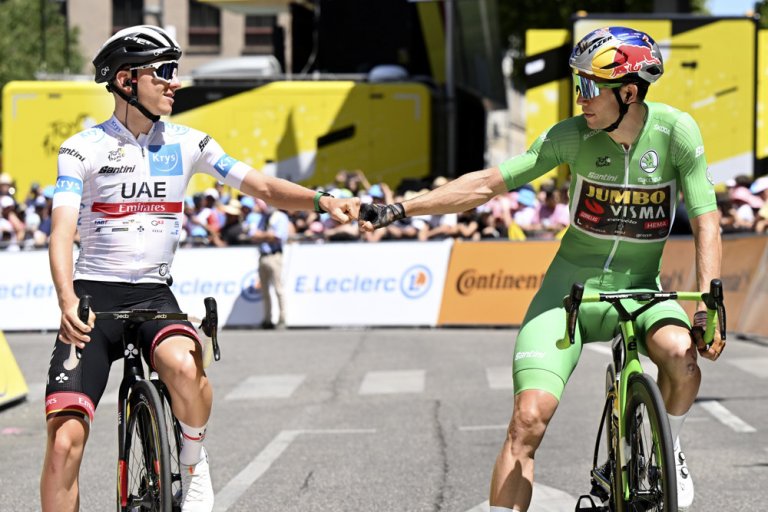 Stage 17 of the Tour de France (Wed, July 20) features four serious climbs over the second half of the race
With the finish line situated uphill in the Pyrenees, top climbers should be at an advantage
Check below for our Tour de France Stage 17 odds and forecast

While five stages remain in this year’s Tour de France, effectively two time defending champion Tadej Pogacar has only two chances left to overhaul Jonas Vingegaard. The pre-race favorite remains 2:22 back, and likely needs to make up most of the gap in the Pyrenees Wednesday or Thursday.

Stage 17 (7:15 am ET) begins slowly. The first 60km are fairly mundane, but three Category 1 climbs plus a Cat 2 over the final half of the race will give ample opportunity for Pogacar to attack. GC contenders have a strong shot on Wednesday’s 129.7 km route from Saint-Gaudens to Peyragudes, but a breakaway winner is viable too. Let’s look at the leading contenders.

Odds as of July 19 at DraftKings Sportsbook.

Vingegaard took the lead last week when Pogacar cracked. Thus far Vingegaard has been unshakable when challenged. Pogacar is 21 seconds ahead of third place Geraint Thomas. Nobody else is within four minutes of the lead.

On Tuesday Pogacar attacked several times but Vingegaard matched him without much difficulty. Hugo Houle, a part of the initial breakaway, raced away from the remaining stage leaders on the Mur de Péguère and soled to victory.

Stage 17 might start slow, but it finishes with 500 metres up at 13% to the finish. That comes after the Col d’Aspin (12 km at 6.5%), the Hourquette d’Ancizan (8.2 km at 5.1%), and the Col de Val-Louron-Azet (10.7 km at 6.8%). The lead-up to the insane finish is the road to Peyragudes which is an 8km stretch with nearly 8% gradient, and then decreases in severity a pinch, before the gruesome final kick. It is a day full for of opportunities for not only Pogacar to challenge Vingegaard, but a breakaway to steal the stage.

Let’s look at some top options for Wednesday and who might be worth a wager.

The three favorites on Stage 17 include the leader, defending champ, and hometown favorite.

Pogacar is running out of time to make his move. Thus far his attempts to rally and gain time on Vingegaard have been repelled. That said, he won the last two years because he can summon greatness at the biggest moment.

There is no question Pogacar is going to attack, and he could win the day without doing major harm to Vingegaard. On the flip side, if the leader cracked Pogacar again, or even just won the day when they were both all out, it would be a real sign of the changing of the guard.

So far Vingegaard has showed little reason not to believe in him. He was the runner up last year.

As for Thibaut Pinot, he is cycling in his home country, and wears his emotions on his sleeve. He has had an up-and-down Tour, but goes all out, and might be in an enviable situation. Since he is not going to be on the podium in Paris, he can be a part of a breakaway without the GC checking him closely. Pinot has won stages three different times on the Tour.

Romain Bardet was within 20 seconds of the podium at the start of Tuesday. Now he is almost four minutes outside the Top 3. That will make him mostly forgotten on Wednesday. In 2019 he won the mountains classification, and three times he has taken stages.

Bardet will need to recover from a tough day, but now won’t be viewed as a major threat, and surely would like to salvage a stage victory.

It has been a minute for Chris Froome. He won the Tour five times over a six year span starting in 2013.

Now at the age of 37 year Froome is a minor player. That said, he has had great mountain stages before, and surely will look for one more moment of glory. The most likely place for it to be successful is on a difficult day of climbing.