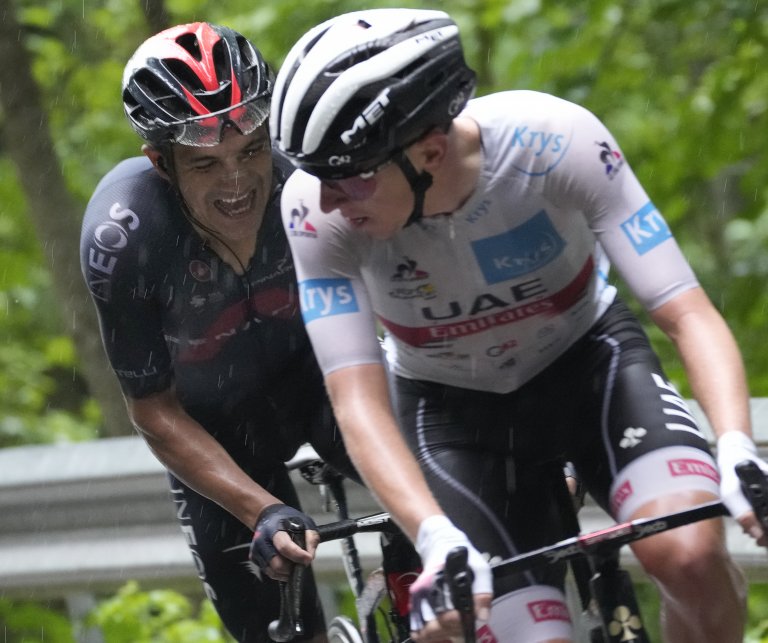 Richard Carapaz of Ecuador, left, strains as he tries to follow Slovenia’s Tadej Pogacar during the eighth stage of the Tour de France cycling race over 150.8 kilometers (93.7 miles) with start in Oyonnax and finish in Le Grand-Bornand, France,Saturday, July 3, 2021. (AP Photo/Christophe Ena)

The final week of the Tour de France begins Tuesday with a hilly stage that includes two challenging climbs over the final 50 km of the afternoon. If two time defending champ Tadej Pogacar doesn’t begin to make up some ground on race leader Jonas Vingegaard, he will need to do so in the mountains on Wednesday or Thursday.

Pogacar begins Stage 16 2:22 behind Vingegaard, and 21 seconds ahead of third place Geraint Thomas. The only other rider within four minutes of the lead is Romain Bardet. The Frenchman is 3:01 off the lead.

Stage 16 (6:30 am ET) starts early on Tuesday, and is likely to be uneventful for several hours unless there are GC contenders among the initial breakaway. There is no double that attacks will be launched when the serious climbing takes place on two category 1 challenges towards the end of the day.

Odds as of July 18 at DraftKings Sportsbook.

While the focus on Pogacar and Vingegaard is reasonable, if both spend most of the day in the Peloton, it is easy to see how two different races could develop. Pogacar does not need to win the stage in order to accomplish his goal of making up time. A breakaway to win the stage, and attacks among the GC could be one in the same, or maybe more likely will be separate.

This is the third identical finish, and fourth similar conclusion of a stage in Foix in recent memory. There is a 9.3 km climb with a near 8% gradient after riders crest Mur de Péguère. After a lengthy descent, the Mur de Péguère starts mild, and then gets gnarly. It features one kilometre at 13% and an even steeper section at 18%. Another long descent leads to the finish. Each of the previous three stages that ended in Foix were won via the breakaway.

So who are the top contenders on Tuesday? Let’s examine some betting options.

After a shocking and dramatic come-from-behind victory in the Tour two years ago, Pogacar dominated last year’s race. For the first time in three years, he cracked last week during Stage 11.

Vingegaard has the lead, but Pogacar has proven himself time-and-time again to be the best rider in the world. After a rest day, with time to make up, it is fully expected that Pogacar will attack, and perhaps be a part of the breakaway. If Pogacar is in the break, the other GC riders may be with him. That could lead to a wild cavalry charge for a portion of the stage.

Thibaut Pinot has been the center of attention consistently this year. He crashed early on, won the Combativity award after Stage 9, and was even involved in a bizarre incident.

Pinot has won three individual stages during his career. He isn’t among the GC race, which can give him an opportunity to attack without the leaders being too concerned. He also has shown an ability and desire to take a stage.

Alberto Bettiol took Stage 19 last year, and this is the type of stage an opportunistic puncheur has a big chance.

Lennard Kämna took his first Grand Tour Stage on the Tour De France in 2020. He won the day on Stage 4 of this year’s Giro d’Italia.

Kämna was caught just before the finish on Stage 7 this year. He very well could be in the mix on Tuesday, and has the ability to get to the line first at a price.

Aleksandr Vlasov just missed the podium in last year’s Giro, and this year was third in the Tour of the Basque Country and won the Tour de Romandie.

Vlasov had GC aspirations at the Tour de France this year, but has had a tough go of it, and is more than 10 minutes back. It is reasonable to think he will try to salvage a stage victory, and doing so prior to the most difficult mountain stages might be a good opportunity.