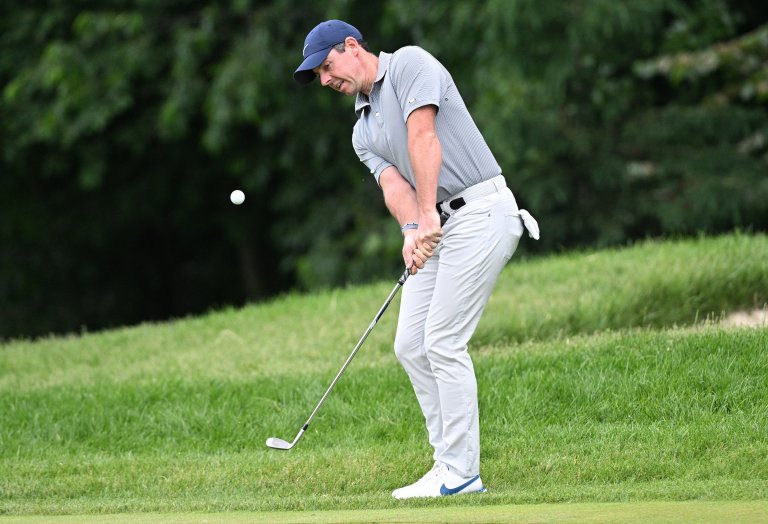 Jun 11, 2022; Etobicoke, Ontario, CAN; Rory McIlroy hits a chip shot from the fringe of the first green during the third round of the RBC Canadian Open golf tournament. Mandatory Credit: Dan Hamilton-USA TODAY Sports

The Tour Championship from Atlanta, GA starts Thursday, August 25th
Rory McIlroy, Patrick Cantlay and Xander Schauffele are +1000 co-favorites to lead after round one
See the best bets and Tour Championship first-round leader odds in the article below

The final leg of the FedEx Cup Playoffs sees the top-29 golfers on the points list compete at the Tour Championship. It would have been 30, but Will Zalatoris withdrew with a back injury. World number one Scottie Scheffler is the favorite to claim his first FedEx Cup, as he starts the event with a two-stroke lead over BMW Championship winner Patrick Cantlay.

There aren’t as many Tour Championship longshot picks to choose from with just the top-29 players on the FedEx Cup points list teeing it up. Taking starting shots out of the equation, a trio of golfers are co-favored to record the lowest first round score on Thursday.

The forecast calls for there to be a risk of a thunderstorm all day. Temperatures will be high 70’s for those teeing it up first, hitting low 80’s for those starting later. The wind will be pretty much the exact same for all players, with gusts only reaching around seven miles per hour.

In the five times Xander Schauffele (1:55pm tee time) has played at this venue, he’s been phenomenal each and every time. He won in his debut performance in 2017, then was in the top-10 in his title defense the following year.

The last three years, if you took away the starting strokes for the championship, he’d have been second in 2019, would’ve won it in 2020, then was third in 2021. Unsurprisingly, his ‘strokes gained’ stats at East Lake have been through the roof.

He also comes in with three titles in his last ten tournaments, and was T-3rd at last weekend’s BMW Championship.

Adam Scott (11:55am) has been outstanding, becoming the only golfer to play his way into both the BMW and Tour Championships when he on the outside looking in at the previous tournaments. He chased a T-5th at the FedEx St. Jude Championship with another T-5th at the BMW.

Subsequently, he sports some impressive statistics of late.

Scott has had success at this venue in the past, with top-10’s in his past three attempts. In his last twelve rounds at East Lake, he’s the best in ball striking and tee-to-green play, and fourth in total strokes gained.

Cameron Young (1:05pm) has had an incredible rookie campaign on the PGA Tour, amassing seven top-3’s, with five of them resulting in runner-up finishes.

Young also ranks ninth in first round scoring average, as he’s shot 67 or better in three of his previous four Thursdays.

In the last twelve rounds, he’s tops in SG: off-the-tee and second in both tee-to-green and around-the-green. While he’s never played the Tour Championship at East Lake before, he presents solid value at his price.