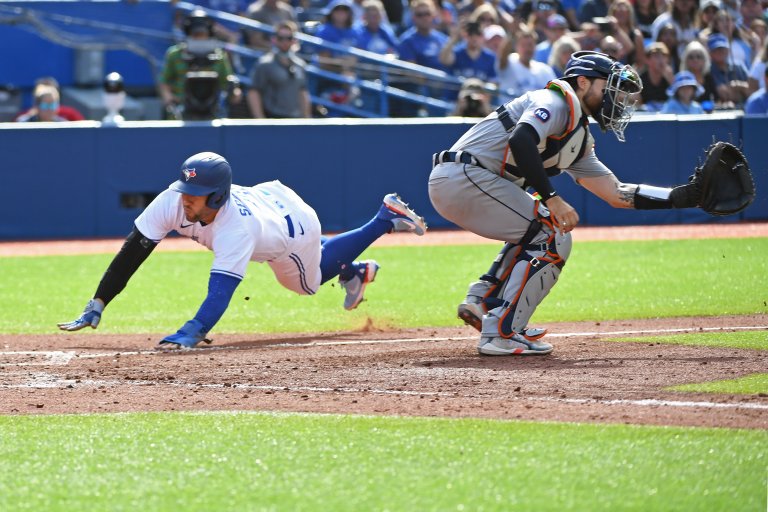 The Toronto Blue Jays are -292 home favorites over the Detroit Tigers in an American League afternoon game on Sunday, July 31
Toronto has won two of the first three games of this four-game series
Detroit is 7-5 straight up in the past 12 games played at Toronto

There’s no questioning that the Toronto Blue Jays (56-45, 33-21 home) are the much better team this season than the Detroit Tigers (41-61, 16-34 away). Still, when they take the diamond to face each other in Toronto, there appears to be little difference.

The Blue Jays have won two of three games in this current four-game set at Toronto. However, Detroit is 7-5 straight up over the past 12 games played on the road against the Blue Jays. Overall, it’s Toronto with a 6-2 SU edge over Detroit in the past eight games.

It’s the Blue Jays who are being made solid -292 favorites to take Sunday’s series finale. At 23-25, Detroit is one of just two MLB teams under .500 against the run line as an away underdog.

First pitch at Rogers Centre is set for 12:05 pm ET on Sunday, July 31. The weather forecast is showing cloudy skies with 10 mph wind and a temperature of 83 degrees.

At odds of -292, the Blue Jays are offering an implied probability of victory of 74.49% in the MLB betting line. A successful $10 wager on Toronto would deliver a payout of $13.40.

The Blue Jays are the +280 second betting choice to win the AL East in the MLB Division odds. The MLB pennant odds have Toronto as the +550 third choice. In the World Series odds, bettors can access +1200 odds on the Blue Jays to be MLB champions. Should you be considering a futures bet on the Tigers, they’re +8000 to win the AL Central, +100000 to take the AL pennant and +100000 to capture the World Series.

A promising start to his MLB career by Tigers right-hander Garrett Hill quickly plummeted southward. Hill worked six innings of two-hit ball, allowing one earned run and getting 4-1 win over Cleveland in his MLB debut on July 4.

This is now a Garrett Hill Stan account pic.twitter.com/S7M4eubUF1

In three starts since, Hill has allowed 12 earned runs in 15 innings and is 0-2. The Tigers have lost all three of those games. In his last start against San Diego, Hill struck out two and walked four.

Hill is 0-2 with an 8.10 ERA in two road starts. He’ll be facing the Blue Jays for the first time in his brief MLB career.

The Toronto offense tends to show up whenever right-hander Jose Berrios is on the bump. In 12 of his 20 starts this season, the Blue Jays have scored five or more runs. Five times, they’ve clicked for double digits on the scoreboard.

He beat Detroit 10-1 on June 10. Berrios allowed one earned run in eight innings. Over 13 career appearances against the Tigers including 12 starts, Berrios is 6-2 with a 4.30 ERA.

Tom Verducci: “You saw those numbers on Robbie Grossman, just hard to understand no home runs.”

No Blue Jays batter has ever faced Hill in an MLB game.

Toronto Blue Jays first baseman Vladimir Guerrero Jr. was a one man wrecking crew in the first inning, single, stolen base and scores from second on a Gurriel Jr. single as the @BlueJays play the @tigers. #BlueGrit #VladyJr pic.twitter.com/7Sl5J5U683

Meanwhile, Hill is absolutely dismal on the road. And as mentioned earlier, run support is a consistent Berrios ally.