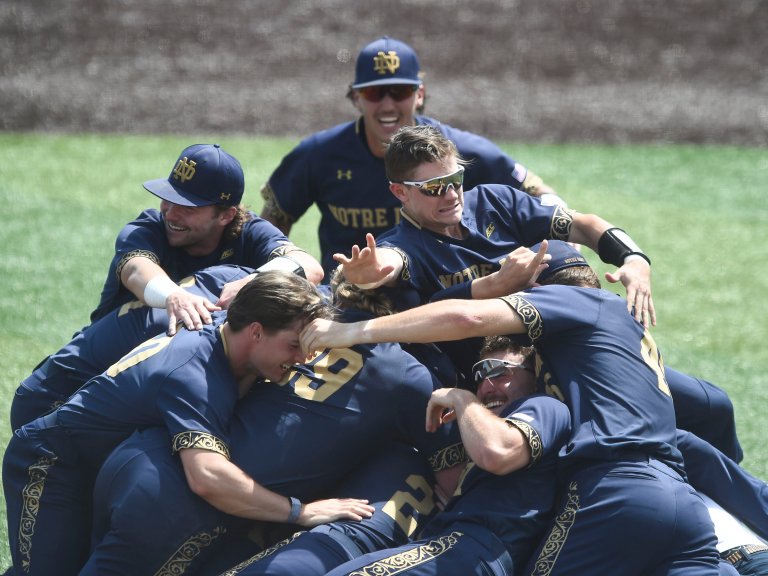 The Texas Longhorns are -138 favorites over the Notre Dame Fighting Irish in a College World Series game slated for Friday, June 17
Texas and Stanford are the +450 co-favorites to win the CWS title
All of the Texas vs Notre Dame odds and predictions are assessed in the story below

There’s a rich history of NCAA showdowns between the Texas Longhorns (46-19) and Notre Dame Fighting Irish (40-15). It’s more commonplace, however, that these clashes take place on the gridiron rather than the diamond.

The two legendary schools are meeting each other in the College World Series on Friday and are quite clearly coming into this game from opposite directions. Texas is a traditional NCAA baseball power.

Oddsmakers are leaning toward the experience school in this game. Texas is set as the -138 favorite. Notre Dame is 11-3 SU in neutral site games this season.

First pitch for this game in Omaha is slated for 7pm ET. ESPN is carrying the broadcast.

At odds of -138, the Longhorns are offering an implied probability of victory of 57.98% in the CWS betting line. A successful $10 wager on Texas would deliver a payout of $17.20.

Texas and Stanford are the +450 co-favorites to win the championship of the CWS. Notre Dame is next in this betting market at +450.

It’s a battle of left-handers on the mound as the Longhorns and Fighting Irish hook up. Notre Dame is sending lefty John Michael Bertrand, an Academic All-American, to the hill. He’s 9-3 with a 2.67 ERA.

The Longhorns will counter with southpaw Pete Hansen. The third-team NBCWA selection is considered the ace of the Texas staff. He’s 11-2 this season with a 3.40 ERA and .223 OBA.

Both Teams Can Catch the Ball

Texas is the nation’s best defensive team. The Longhorns have committed just 37 errors in 65 games. The .980 fielding percentage of the Irish (41 errors) is 13th in the NCAA.

Stay ready and you don’t gotta get ready. #HookEm pic.twitter.com/WjpWaljEKH

Can Irish Sink the Hispanic Titanic?

The first player to hit 30 home runs in a single season since 2013 and a Golden Spikes finalist, @TexasBaseball’s @ivanmelendez17_ aka the ‘Hispanic Titanic’ has taken the college baseball world by storm.#MCWS pic.twitter.com/3KU4CJLyCV

It should be noted that the reason why Texas and Stanford are now favored is because the original CWS chalk, the Tennessee Volunteers, were ousted by Notre Dame in the Super Regionals.

Up until that series, #1-ranked Tennessee had out-homered opponents 150-57. However, Notre Dame nearly matched the Vols homer for homer, losing the long-ball battle 8-7.

There’s been more CWS held with Texas (38) than without the Longhorns (37). Not only are those 38 appearances a tournament record, the number is 13 better than second-place Miami. This will be the 152nd CWS game for Texas.

By contrast, Notre Dame is playing in its eighth CWS. This is the school’s first trip to the CWS in 20 years and second in 64 years.

However, don’t sleep on the Irish. Along with taking down the favored Volunteers, Notre Dame is 85-30 since the start of the 2020 season. That’s second-best in the nation.

This will be the seventh all-time meeting between Texas and Notre Dame and the first since 1995. It’s the first game between the two schools at the CWS since 1957. The series is deadlocked 3-3.