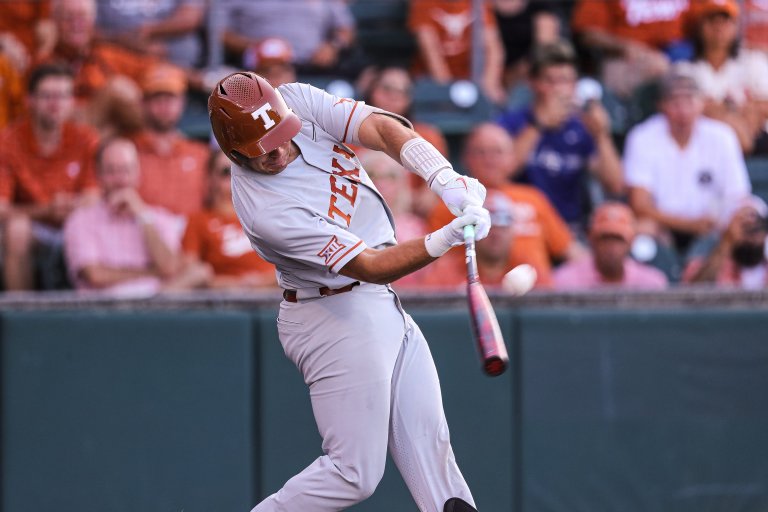 It’s win or go home on Sunday at the College Baseball World Series for Texas A&M and Texas. The two clubs each dropped their opening game on Friday and one more loss will officially end their National Championship dreams.

This will be the second meeting this year between the programs, and while the Aggies took the first matchup, oddsmakers are expecting a different result this time around.

Odds as of June 18th at DraftKings Sportsbook.

Texas is currently a -155 moneyline favorite in a contest that features a total of 12. First pitch is scheduled for 2pm ET at the Charles Schwab Field in Omaha, Nebraska with ESPN providing the broadcast coverage.

Texas dropped their opener 11-6 to Notre Dame, and will be looking for a better performance from their starter on Sunday. Ace Lucas Gordon will get the ball, after posting a 7-1 record during the regular season with a 2.68 ERA.

The sophomore is looking to rebound from a rough outing against East Carolina, where he lasted just 4 innings after giving up five hits and five runs.

Prior to that outing he’d allowed two or fewer runs in five straight starts, racking up 32 strikeouts along the way. The matchup versuhttps://twitter.com/josephcook89/status/1538174208835870721s the Aggies is imposing, as we’ll discuss later, so he’ll need his best stuff to give Texas a chance to advance.

A&M meanwhile, is fresh off a 13-8 loss to Oklahoma and will counter with Micah Dallas. The junior had an up and down regular season, posting a 6-3 record with a 5.40 ERA. Over the past month he’s been a model of inconsistency, looking miserable and magnificent depending on which day you catch him.

Texas A&M head coach Jim Schlossnagle: “For us to make it deep in this tournament, somebody has to show us something. Micah Dallas is certainly capable of that.”

Last time out, he coughed up three runs and eight hits over 4.2 innings to Louisville, but yielded just one run total in his previous two starts versus Florida and Oral Roberts. The outing prior to that however, was a disaster. He failed to make it out of the 2nd inning after surrendering eight hits and eight runs.

Dallas will also face a brutal matchup as the Longhorns’ lineup is loaded with talent. None more so than the Hispanic Titanic Ivan Melendez, who was named college baseball’s player of the year on Friday.

A big day for @TexasBaseball in Omaha starts with Ivan Melendez and David Pierce attending a press conference for the Dick Howser Trophy. Melendez is the fourth Longhorn to win the award. #HookEm pic.twitter.com/11D2A2sSv9

Not to be outdone, the Aggies are actually averaging 8.2 runs per game in the NCAA Tournament. They don’t have a talent that rivals Melendez, however Austin Bost is doing his best impersonation. He’s 8-for-23 in the NCAA Tournament with three homers, 9 RBI and a .348/.414/.739 slash line.

A&M’s potent lineup has been a golden ticket to over bettors, as 14 of their past 20 games have cleared 12 runs. They scored 12 runs on their own in a 12-9 victory over Texas earlier this season, smacking three home runs and 13 hits along the way.

Texas meanwhile, has seen three of its past four games clear 12 runs, and have the pop to force Dallas into another early exit.