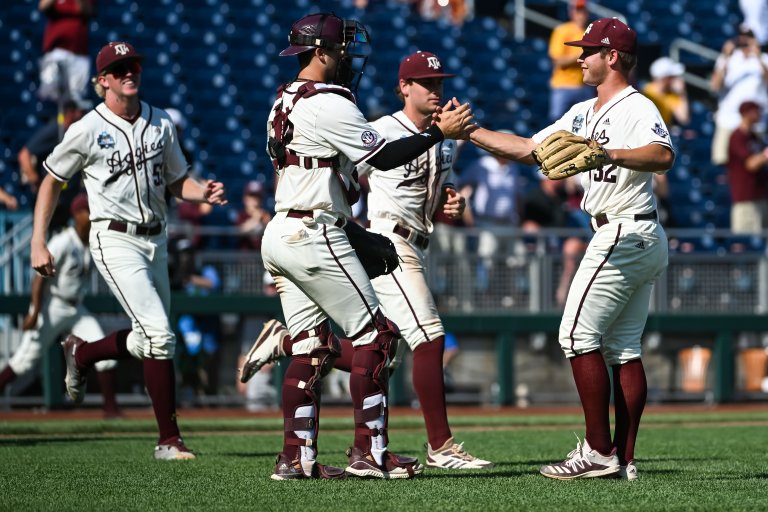 Texas A&M has already staved off elimination once at the College World Series, the question now is can they do it again on Tuesday.

The Aggies, fresh off a 10-2 rout of Texas, will take on Notre Dame in another loser leaves down match with the winner earning a date with Oklahoma. Notre Dame just suffered a 6-2 loss to the Sooners on Sunday, but oddsmakers are expecting the Fighting Irish to bounce back against A&M.

Notre Dame opened up as a -145 moneyline favorite in a contest that features a total of 14.5. First pitch is scheduled for 2pm ET at the Charles Schwab Field in Omaha, Nebraska with ESPN providing the broadcast coverage.

As of Monday afternoon, neither team had named a starting pitcher. Media members following both teams have a strong idea who of will wind up getting the ball, but the official announcement isn’t likely to be made until Tuesday.

Texas A&M head coach Jim Schlossnagle said they are still unsure of who will start tomorrow’s game against Notre Dame, but it will most likely be an “all hands on deck” situation.

The Aggies used their top two starters in the first two games of the CWS, so number three starter Ryan Prager is likely to get the nod. The freshman doesn’t have a strong record of long outings, so we should expect a busy night for the A&M bullpen.

Prager was 1-3, with a 4.89 ERA during the regular season, but hasn’t made it out of the 5th inning in any start since mid-March. He’s lasted less than 4 innings in three consecutive starts, racking up more walks (6) than strikeouts (4).

Notre Dame also used up its top-two starters in their first two games of the CWS, but doesn’t have a true number three. Those close to the program however, expect Liam Simon to toe the rubber. The junior was yanked after only 1.2 innings last time out versus Tennessee, but was much better in his previous outing. That day he pitched 5 scoreless innings against Virginia, scattering a pair of hits.

Whoever takes the ball for the Fighting Irish it’s clear what the goal will be. Get to the point where they can deploy Jack Findlay. The freshman phenom was 5-1 in the regular season, with a sparkling 0.79 ERA.

Another save to win the regional

FIVE INNING SAVE to eliminate them and go to Omaha

All AS A TRUE FRESHMAN!!!

So far through five appearances in the NCAA Tournament, he’s pitched 12.2 innings posting a victory, four saves and 14 strikeouts, while surrendering just a single run.

A&M’s offense continued its power surge versus the Longhorns racking up 10 runs and 13 hits after falling behind 2-0. They’ve scored at least eight runs in 11 of their past 16 games, and three of their regulars (Austin Bolt, Jordan Thompson and Jack Moss) are batting .348 or higher during the NCAA Tournament.

THE AGGIES ELIMINATE THE LONGHORNS ‼️ @AggieBaseball is still dancing in Omaha. pic.twitter.com/aaIBv8F16K

They feasted on Texas’ starter Lucas Gordon, one of the better arms in the country, and are capable of doing exactly the same to whoever pitches the early innings for Notre Dame. The key is to get to the Irish before Findlay makes his way into the contest.

Another reason why jumping out to a quick lead will be imperative for the Aggies is the fact that the Fighting Irish aren’t built to play from behind. This is a team that relies heavily on pitching and defense. Notre Dame is averaging only 4.5 runs per game over their past 11 outings, and doesn’t feature a lineup with dangerous bats from top to bottom.

The Fighting Irish haven’t lost back-to-back games since the end of April, but this A&M offense is too good to fade at the moment. They’re 29-6 when they score at least six runs, and there should be plenty of optimism that they can cross the plate at least than many times on Tuesday.

Prager on the rubber doesn’t inspire a ton of confidence, but the bullpen is more than capable of picking up the slack versus an underwhelming Notre Dame lineup. Aggie relievers just tossed 3 innings of shutout ball against a mighty Texas lineup, yielding only a single hit.