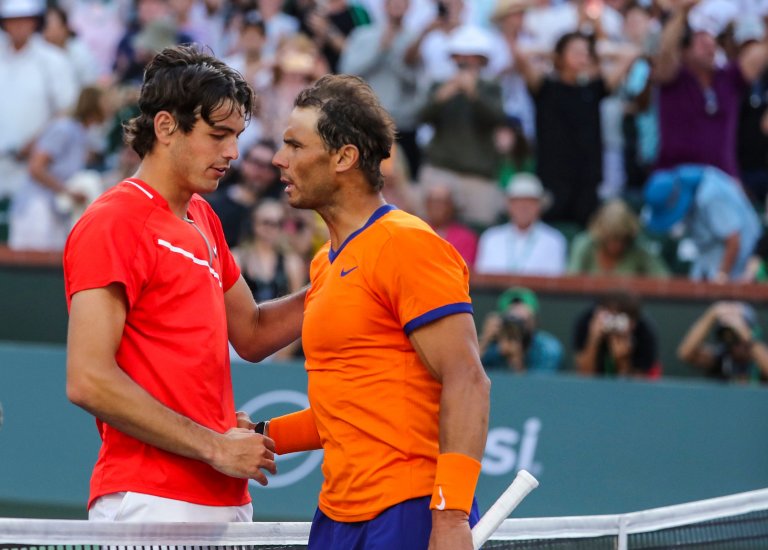 Taylor Fritz of the United States (left) shakes hands with Rafael Nadal of Spain after defeating him in the ATP singles final at the BNP Paribas Open at the Indian Wells Tennis Garden in Indian Wells, Calif., Sunday, March 20, 2022.

It’s been low-key, but Rafael Nadal’s quest for the calendar Grand Slam is still alive
Taylor Fritz is in his first career quarterfinal at Wimbledon – or at any Grand Slam
Nadal is a favorite, but not an overwhelming one. We break down this Taylor Fritz vs Rafael Nadal match here

If Rafael Nadal looked ahead in the draw at all, he might have expected to face No. 6 seed Félix Auger-Aliassime of Canada in the quarterfinals.

Auger-Aliassime was a quarterfinalist a year ago; and the 21-year-old Canadian defeated Nadal in their final tuneup, an exhibition match at the nearby Hurlingham Club.

But Auger-Aliassime was out in the first round at the hands of serve-volley throwback Maxime Cressy.

And a week later, the man from Mallorca finds himself against the next-highest seed in his quarter of the draw.

Only Djokovic has remained a bigger favorite than Nadal to take this title.

Fritz, meanwhile, was at +5000 before Wimbledon began; the current Wimbledon odds have him up to +2000.

Nadal Gets Cranky vs Sonego

Nadal dropped a set in his first two rounds.

But he got through the next two in straight sets – even though his third-rounder against No. 27 seed Lorenzo Sonego had its touchy moments.

Sonego was headed away after a quick handshake but was detained by Nadal. They had a long discussion – Nadal explaining, Sonego seemingly protesting.

It ended cordially, if not warmly. pic.twitter.com/ENvUpmUlh4

Annoyed by Sonego’s habit of emitting a long, drawn-out grunt after hitting a shot, Nadal went against the accepted practice and addressed Sonego directly – actually calling him over to the net for a father-son chat.

Beyond that, he has had few issues. And with the foot problem under control for the moment, and the first two Grand Slams of the season in his pocket (and Novak Djokovic not playing lights-out tennis), he has to think he has a shot at only his third career Wimbledon title.

Dream Draw for Fritz So Far

As for Fritz, who had never made the second week of a major until this year in Australia (he lost in the round of 16), it’s been a steady progression.

He’s tall and kind of gangly. And he’s not especially enamored with the net. So he doesn’t, on paper, look to have huge prospects on grass.

But he’s got a big serve and a big forehand and these days, that puts you in the conversation.

He’s also developing a nice fighting mentality, that has come with his increasingly good results.

Fritz has yet to drop a set. Of course, he’s had a pretty fortuitous draw so far. So far.

Epic in the Desert Highlight of Rivalry

The two have met twice before – both in finals.

But it’s tough to gauge much from their dramatic Indian Wells final.

Both players were injured; Nadal had a stress fracture in his ribs, and Fritz injured his ankle in practice before the final. It was touch-and-go whether he was even going to play.

Good decision; Fritz won the biggest title of his career. And he did it at essentially his hometown tournament – the one he visited every year as a Southern California kid.

Fritz has 58 aces through 12 sets and four matches, and just 10 double faults.

He has been broken in each match – but only in one was he broken more than once.

He’s been taking care of his serve.

On his end, Nadal has been creating a ton of chances.

Through four matches, he has broken his opponent 21 times, in 49 opportunities.

That’s a significant number on grass. And that is likely to be the most important matchup in the clash and the area where Nadal will likely win it.

The Spaniard hasn’t lost a match in a Grand Slam yet in 2022.  So even if his road so far has been pretty quiet, that doesn’t mean that he doesn’t have every intention of keeping that streak going.

Get this BetRivers bonus code  for Wimbledon at one of the best tennis betting apps. Bet $25 on any match and get a $10 live free bet!