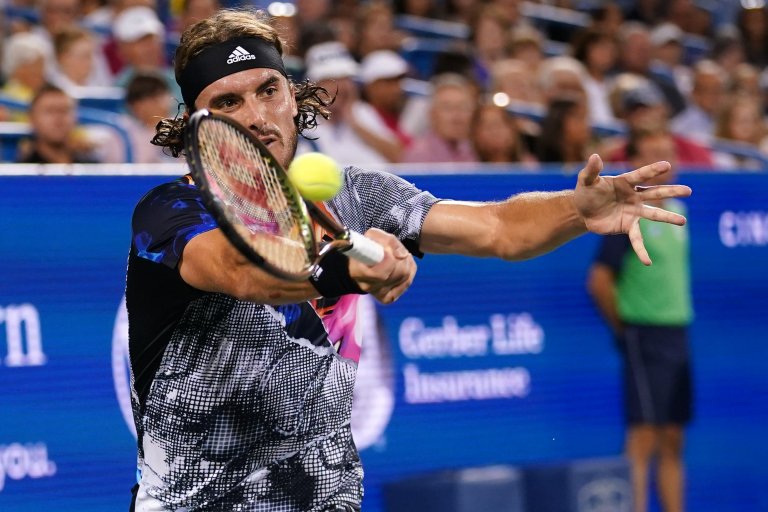 Stefanos Tsitsipas, of Greece, returns a shot against, Daniil Medvedev, of Russia, during a semifinal match of the Western & Southern open tennis tournament, Saturday, Aug. 20, 2022, at the Lindner Family Tennis Center in Mason, Ohio.

Borna Coric, currently ranked outside the top 150, is a surprise Western & Southern Open finalist
He’ll play No. 4 seed Stefanos Tsitsipas, who upset world No. 1 Daniil Mededev late Saturday night.
Tsitsipas is favoured for the match, scheduled not before 4:30 p.m. ET Sunday; read on as we break it down

If you had Borna Coric, ranked No. 152 and playing on a protected ranking, in your finalists’ picks at the Western & Southern Open, give yourself a pat on the back.

Odds as of Aug. 20 at FanDuel. Use this FanDuel Sportsbook promo code to bet on the Western & Southern Open.

The 25-year-old is coming back from shoulder surgery performed in May, 2021 in New York (and had been out two months before that). So when he returns to New York next week for the US Open, it will be a pretty happy homecoming.

Only One Set Lost in Five Matches

It’s not that Coric’s level is a surprise; he’s a former world No. 12. But he arrived in Cincinnati with a 4-8 record, And the highest-ranked player he’s beaten since his return was No. 47 Tallon Griekspoor, on clay in Hamburg last month.

That one set was, no surprise, to Nadal in the second round.

The match against Norrie was shockingly routine. Although, to be fair, Norrie had been involved in a draining, leg-sapping marathon in upsetting No. 3 Carlos Alcaraz the previous night.

As for Tsitsipas, who was shocked by qualifier Jack Draper in his opening round in Montreal last week, it’s been a ride.

After two routine victories, he pulled out a three-setter against John Isner – always tough on a fast hard court. And late Saturday, as there were multiple rain delays – he took on world No. 1, Daniil Medvedev.

The two have an …interesting history. And there’s definitely a spice to their rivalry, which stood at 7-2 Medvedev (and 5-0 on hard courts) before this semifinal.

Other than at the majors, where the matches have not been dramatic and where Medvedev has won hard-court tussles in New York and Melbourne, all of their best-of-three matches have been tough ones.

This one, two hours and 23 minutes with 18 double faults between them was no exception.

Even the second set, in which Medvedev was up 5-0 only to (nearly) cough up the lead, had its drama.

The Russian had three chances to break Tsitsipas’s serve, and he was successful every time. He was far more efficient on his own second serve than Tsitsipas was.

And yet, the 24-year-old from Greece took it.

He did what has become a more common practice against players who stand as far back as Medvedev does to return: a lot of serve and volley. Drop shots. Changed it up.

Saturday’s semis were played at about the same time, on different courts, as the rain delayed proceedings until well after dark. So there’s no edge there even if Tsitsipas has also played a lot of doubles this week.

Coric will try to remember that five-set marathon win at the US Open, almost exactly two years ago and just before the Croat’s shoulder started giving him major trouble.

Tsitsipas will try to forget it.

But the conditions are similar, and Coric is playing top-flight tennis. He’s already assured of being back in the top 50 after this week.

If the Croat can win the tournament, he would be seeded at the US Open.

It’s Coric’s second Masters 1000 final; he defeated  Stan Wawrinka, Juan Martin del Potro and Roger Federer in 2018 in Shanghai, but lost to Djokovic in the final. That tells you what he’s capable of.

Tsitsipas has six Masters 1000 finals and two titles. But all but the first, in Canada in 2018, have been on clay.

It sets up as a long one.