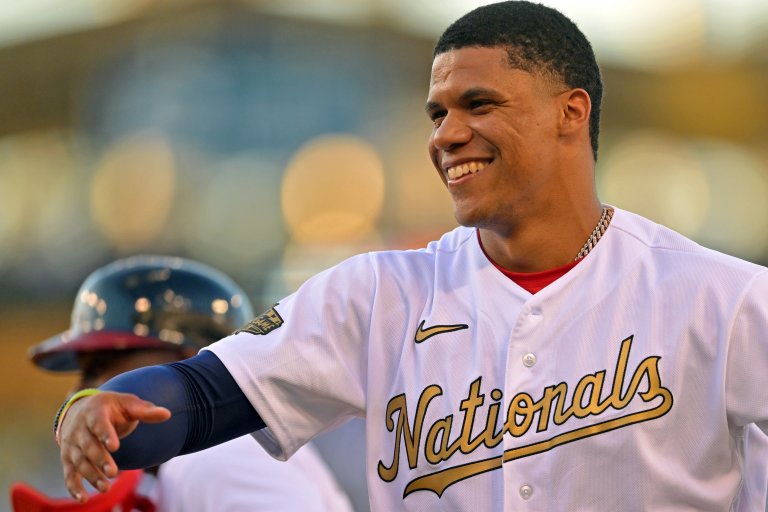 Juan Soto recently turned down a $440 million extension from the Nationals, paving the way for a trade ahead of the August 2nd deadline
The Mets and Yankees are currently the favorites at Pointsbet to make a move for the two-time All-Star
What team is the most logical fit for Soto? Find the Juan Soto next team odds and analysis below

The biggest storyline ahead of the August 2nd MLB Trade Deadline is Juan Soto turning down a massive 15-year, $440 million extension from the Washington Nationals, which would’ve paid him just under $30 million per season.

After declining the offer, the two-time Silver Slugger Award winner is now expected to be moved and by no surprise, numerous contenders are looking to pull off a blockbuster for one of the best hitters in the game who was an early favorite in the NL MVP odds.

Read on for the odds on his next team, with the Yankees and Mets currently topping the list at PointsBet.

Odds as of July 21st at PointsBet.

A divisional foe leading the Soto race. The Mets also compete in the NL East and while they don’t have the deepest farm system in baseball, NY could offer an intriguing package for Soto. The Mets have numerous prospects in the top 100 and it would be worth parting ways with a few of them in order to acquire a talent like Soto.

The Washington #Nats have begun fielding preliminary offers for Juan Soto, with seven teams already weighing in, including 3 in the NL West:#Mariners#Padres#SFGiants#Dodgers#STLCards#Yankees#Mets.
The trade deadline is Aug. 2, but Nats will wait unless get the right deal

New York’s offense might be scoring 4.7 runs per game this season, but as a whole, they’re not the most consistent. Adding another impact bat alongside Pete Alonso and Francisco Lindor would be a dream for Steve Cohen and potentially the missing piece to a World Series.

Would it even be fair for the Yankees to acquire another star who can swing it with the best of them? Well, according to the sportsbooks, yes. With 2.5 years left on his current deal, Soto could make the Bronx Bombers’ No. 1 ranked offense even better. With a short porch in right field, Yankee Stadium is a match made in heaven for the 23-year-old. New York has a boatload of prospects they can offer the Nationals too, and they may even be willing to include someone like Gleyber Torres in a package.

If you had a free bet, who would you pick? ?#GamblingTwitter #MLB #JuanSoto pic.twitter.com/N6NIyXAMWN

Seeing Aaron Judge, Giancarlo Stanton, and Soto in the same lineup is extremely scary. But if Judge doesn’t re-sign this winter, Soto could very well be his replacement in the long-term. Washington likely gets the Yanks’ top prospect too in Anthony Volpe, one of the most toolsy players in the minors.

Dodgers, Blue Jays Worth a Bet?

The LA Dodgers are a team known for their ability to splash the cash on superstar talent. They’ve also got a working relationship with the Nats, acquiring Trae Turner and Max Scherzer last season at the deadline. We know the Dodgers have the money and you’d have to believe Soto would be keen on joining a team that already has +375 World Series Odds. Los Angeles is always willing to go above and beyond to make its team even better. That’s why you can’t count them out here.

The Dodgers are +600 to be Juan Soto’s next team ?
pic.twitter.com/JzxO9nqu8q

The Blue Jays feel like a bit of a longshot but it’s not totally out of the question. Adding a player like Soto to a lineup featuring Vladimir Guerrero Jr, George Springer, Bo Bichette, and Teoscar Hernandez, among others, would be a nightmare for opposing arms. You’d definitely see their MLB Playoff Odds skyrocket even more, too.

Do you think the Blue Jays should try and acquire Juan Soto?

If yes, who are you okay with them trading? ?

His experience and maturity as a hitter could make these other sluggers better and although Toronto does need pitching help, Soto’s star prowess instantly gives the Jays arguably the most terrifying offense in baseball. A haul of prospects will be the sacrifice, but that’s expected.

In my eyes, the Yankees and Dodgers are likely the two teams to pursue Juan Soto the heaviest.  They have the clout and the assets to offer Washington in return. The Nats trading their best player to a divisional rival like the Mets seems a bit unrealistic.

Sprinkle a bit of money on each, it could be worth it come August 2nd.