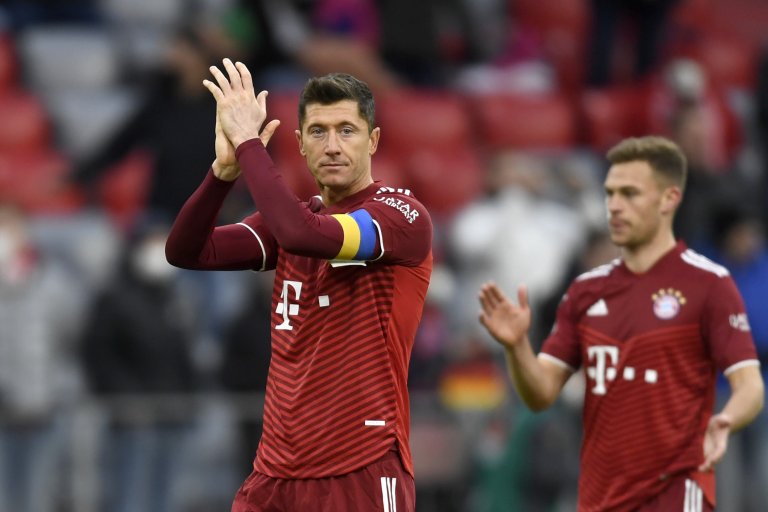 Bayern’s Robert Lewandowski, wearing an armband in the Ukrainian flag colors, applauds the fans at the end of the German Bundesliga soccer match between FC Bayern Munich and Bayer 04 Leverkusen at the Allianz Arena in Munich, Germany, Saturday, March 5, 2022. The game ended in a 1-1 draw. (AP Photo/Andreas Schaad)

There are plenty of big names who are being touted for big-money moves this summer, among them Robert Lewandowski, Cristiano Ronaldo, Raheem Sterling, Tanguy Ndombele, and Álvaro Morata. Some of these players are out of contract, others not so and so will be moving for massive fees, but all are on the radars of some European giants.

We’ll take a closer look and see if we can identify who’s likely to leave and for which destination. Take a look at our soccer transfer odds below.

If you’re new to betting on soccer, then I’d suggest taking a look at our How to Bet Soccer page for loads of useful info.

Robert Lewandowski – Odds for Next Team

Check out these odds at BetRivers Sportsbook.

Lewandowski may be 33 years old, but remains one of the hottest properties in European soccer. It seems his time in the Bavarian capital is up and all of the big names are hovering, as the priceless commodity of a top-level goalscorer comes onto the market.

Huge thanks to my Teammates and Coach for the entire season! 🙌⚽ @FCBayern#RL9 #Bundesliga 🏆 pic.twitter.com/1iUxRUZUfO

The clear favorites are Barcelona, who after months of speculation are believed to have finally made an offer for the Polish superstar, rumored to be in the region of 40 million euros.  While nothing has emerged from either club so far, it is also believed to be the player’s preferred destination.

If, however, the deal falls through, the Premier League appears a likely option, and with Chelsea’s new owners looking for a marquee signing, the north London club could yet emerge as a contender.

Cristiano Ronaldo – Odds for Next Team

Ronaldo is officially under contract at  United until June 2024 but as the team struggled in the Premier League last season it was reported in the English press that he may wish to quit this summer if United were to finish outside the top four. In the end, they finished a disappointing sixth, which has naturally led to intense speculation.

“He’s a top player and although the chances of us winning are greater [if Juventus] are without him, I want to play against and beat the best players.” pic.twitter.com/WP291qllBb

Chelsea was reported to be interested in the Portuguese superstar but the arrival of Erik ten Hag in the manager’s hot seat at United may be enough for him to give it another season in the northwest of England. He is expected to report for pre-season training next Monday, but if a surprise move were to suddenly transpire, I’d still expect him to stay in EPL.

Raheem Sterling  – Odds for Next Team

With just 12 months left on his current contract, Sterling has been tipped for a move away from Manchester City this summer. The England international was in and out of Pep Guardiola’s team last season – he made just 23 EPL starts – and was often absent for the big games, hence the intense speculation of a move to somewhere he’d pay more regularly.

Chelsea have made contact with Manchester City regarding a move for Raheem Sterling 🗞 pic.twitter.com/WiKPVHmAj2

The English press is reporting that he’s already spoken with Chelsea boss Thomas Tuchel, and while a deal is not yet close it is quite possible. Another possibility, however, is that the player negotiates a year’s extension to his City deal, thereby protecting his value, and gives them one more season before re-evaluating his options.

Tanguy Ndombele – Odds for Next Team

Ndombele joined Spurs from Lyon in 2019 for around 64 million euros but has never settled in north London, not helped by a series of niggling injuries. He spent the second half of last season on loan at his former club, Lyon, but they decided against making the deal permanent. Galatasaray was also mentioned as an option but that deal appears to have collapsed.

What a midfield due this would be with a top form Tanguy Ndombele & new signing Yves Bissouma 👌 pic.twitter.com/5QOamrjFFk

The French press is reporting that an ‘unnamed’ Spanish club is already negotiating a deal, so, on that basis, it’s worth noting that Valencia is the bookies’ second favorite. It is unclear whether any deal would be permanent or a season-long loan.

Álvaro Morata – Odds for Next Team

Morata, while still officially an Atletico Madrid player, has spent the last two seasons on loan at Juventus, where he scored 32 goals in 92 games. The player has been made available to Juve for 35 million euros, but the Bianconeri appear unwilling to make the deal permanent.

Arsenal ‘have made an offer to Atletico Madrid for Alvaro Morata’ despite almost reeling in Gabriel Jesus… but Juventus want to keep the Chelsea flop permanently after successful two-year loan spell. pic.twitter.com/KLJvgI2ApO

Arsenal emerged as contenders a couple of weeks ago but are now on the verge of signing Gabriel Jesus, so that may end their interest in Morata. With the Atleti president hinting that the player may stay and resurrect his career in the Spanish capital, don’t be surprised if he reappears next season in red and white stripes.

Other potential moves worth keeping an eye on…

Neymar is down to +400 to join Juventus from PSG.
Leicester City’s Youri Tielemans is well priced at +300 to head to Arsenal.
Juve’s Aaron Ramsey is down to -115 to join his boyhood club Cardiff City in the English Championship.