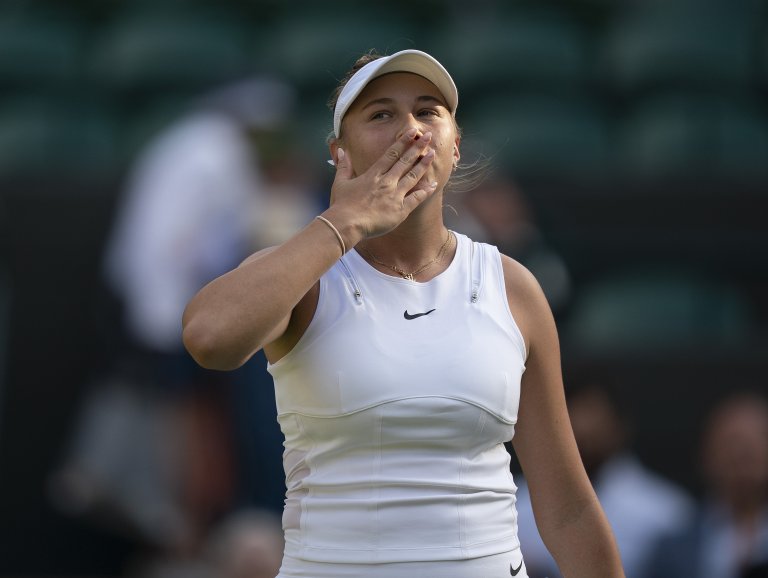 The quarterfinals of women’s singles play at Wimbledon continue on Wednesday, July 6th
Simona Halep and Amanda Anisimova will go head-to-head
Continue below for odds, preview and best bet predictions

2022 Wimbledon is slowly starting to wind down, and the first half of the tournament was full of surprises. Now, on the women’s singles side, half of the quarterfinalists are unseeded. If that doesn’t give you an idea of how exciting the first half was, I don’t know what will.

In one of two quarterfinal matches being played on Wednesday, 16th seed Halep will take on 20th seed Anisimova. Both of these two have the ability to go on and win the tournament. Halep most recently won in just 2019.

Odds as of July 5th at Caesars Sportsbook.

It shouldn’t be a surprise that former champion Halep is the favorite heading into this match. Since the beginning of the tournament her Wimbledon odds have slowly started to shorten.

Halep Continues to Cruise Through

The 30-year old had a less than ideal 2021 season, but came into Wimbledon this year coming off of back-to-back semifinal appearances in both Birmingham and Bad Homburg.

On route to this year’s quarterfinals, Halep has yet to drop a set, and in her round of 16 match, she defeated Paula Badosa 6-1, 6-2, extending her winning streak at Wimbledon to 11 matches.

2019 champ 🇷🇴 @Simona_Halep is into a fifth quarterfinal at #Wimbledon with a 6-1, 6-2 victory over No.4 seed Badosa! pic.twitter.com/qPShI79LRy

In her first match on Centre Court in three years, she finished with 17 winners, which was 10 more than her opponent.

Can Halep continue to live up to the fact that she’s the only former Grand Slam champion left in this year’s singles women’s draw? Only time will tell.

The 20-year old American quickly ended Tan’s dream run at Wimbledon with a 6-2, 6-3 win. Tan made headlines when she defeated Serena Williams in the first round.

Anisimova, who lost in the first round of Wimbledon last year, will be competing in her first Grand Slam quarterfinals since the 2019 French Open. Funny enough, she also beat Tan that time around too.

The American has had an impressive tournament so far. She came back from a set down in both her second and third round matches against fellow Americans Lauren Davis and Coco Gauff.

Halep and Anisimova are no stranger to one another, having played each other three times already. Their first meeting came back in 2019, where Anisimova stole the match in straight sets. But the next two were all Halep, winning in 2020 and most recently in 2022, in straight sets.

The Romanian star comes into this match with much more experience over the young American. Halep has found success here at Wimbledon, and has always enjoyed playing on the grass surface.

When the second week of a Grand Slam comes around, fatigue can start to come into play. These two players have spent hours on the court over their past four matches. In addition to the experience she’ll bring, Halep will also be a bit more rested than the American, having defeated all her opponents in straight sets.

Anisimova will come out aggressive. She recorded a total of 28 winners against Tan, and has a strong groundstroke. But Halep is one of the strongest defenders on tour.

Because of experience, and how the past week and a half has played out, look for Halep to move onto the semifinals in a close 2-0 win.