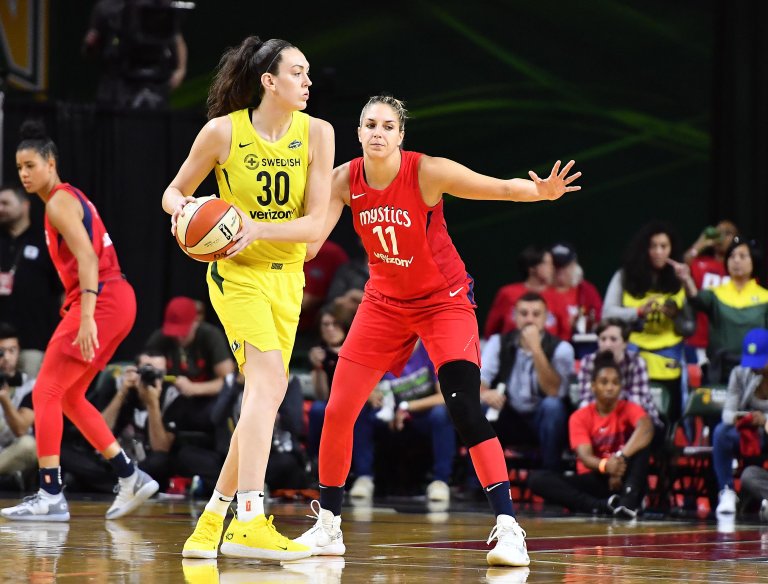 The Seattle Storm travel to face the Washington Mystics at 12pm ET on Saturday, July 30th
Both Seattle and Washington enter the game with records of 18-11 overall and tied for the fourth seed in the WNBA standings
See below for the latest Storm vs Mystics odds, analysis and best bet

To begin play in the WNBA on Saturday, July 30th, a pair of playoff teams will battle for positioning in the postseason when the Seattle Storm visit the Washington Mystics at 12pm ET at Entertainment and Sports Arena in Washington DC. The game will be aired on ESPN.

The Storm enter the game with a record of 18-11 overall to sit as a top-five team in the league standings. Seattle, which is 6-4 over its last 10 games, is coming off an 88-83 loss to the Connecticut Sun on Thursday in Connecticut.

Odds as of July 29th from Caesars Sportsbook

The Mystics are also 18-11 on the year, holding firm as a top-five seed in the WNBA. With a record of 7-3 over its last 10 contests, Washington most recently topped the Dallas Wings 87-77 on Thursday in Arlington.

Entering Saturday’s game, the Mystics are listed as three-point favorites over the Storm.

Playoff Implications on the Line

Although both Seattle and Washington are playoff teams, the two squads are going to be fighting for positioning.

The Storm and Mystics are tied in fourth place in the WNBA standings, trailing the Sun and the third seed by two games, while sitting ahead of Phoenix and the sixth seed by five games.

Seattle is also looking to take a 2-0 series lead over Washington, which would result in the Storm owning the tiebreaker which could come into play if the teams are still tied after the regular season concludes. If the Mystics win Saturday and even the series at 1-1, the third and final game between the teams on Sunday will decide which squad will own that tiebreaker.

Seattle and Washington will enter the playoffs as two teams who could contend for a WNBA Championship and could perhaps even meet up in the postseason. The Storm currently hold third-best odds of +450 while the Mystics are listed fifth at +1000 in the 2022 WNBA Championship Odds.

Seattle, is one of the more complete and deep teams in the WNBA, which is something that will benefit the Storm as the postseason progresses. Breanna Stewart, Sue Bird, Jewell Loyd and company have cooled off a bit as of late, but the Storm have faced some top-tier talent down the stretch of the season which could make them even more battle-tested entering the playoffs.

On the other hand, Washington is playing some of its best basketball and the right time, putting itself right in the heart of a hunt for a top-four seed in the playoffs. With a healthy Elena Delle Donna and dominant play from Ariel Atkins, Natasha Cloud and others, the Mystics are rolling at the best time and could put a strong run together in the postseason.

The biggest key to the game will come on the defensive end of the floor. Seattle and Washington have two of the best defenses in the WNBA, while ranking in the bottom half of the WNBA offensively.

Whichever team can limit mistakes on their own end and hold sturdy on defense the longest should come out on top.

In the first game of the season series between the teams on June 23, Seattle defended home court and cruised to a 14-point win over Washington. Although the scene shifts to DC Saturday, the Storm should still be able to hold the Mystics in check on their home court to come out on top. Seattle will end up being the team that jumps in front in the standings after the game, putting it in prime position to claim the fourth seed.

For the best bet of the night, go with the Storm being three-point underdogs for this showdown. Seattle should be able to come out with the victory, meaning it would cover that spread placed.