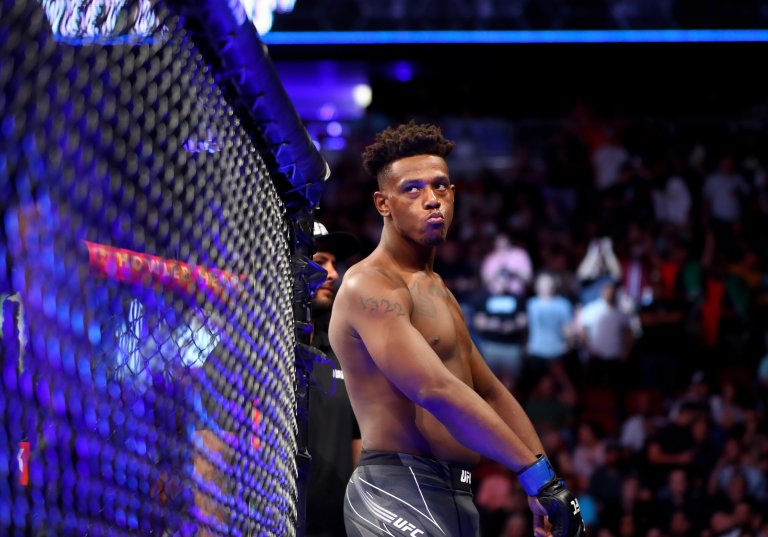 Light heavyweights clash in the UFC on ESPN 40 main event as Thiago Santos takes on Jamahal Hill
Welterweights are featured in the co-main event as Vicente Luque battles Geoff Neal
Read on for all the odds and trends ahead of all the UFC Fight Night: Santos vs Hill action on Saturday night at UFC APEX

Light-heavyweight contenders headed in opposite directions are set to clash in the main event at UFC Fight Night: Santos vs Hill (also known as UFC on ESPN 40) on Saturday, August 6. Jamahal Hill vies for a third straight win as he takes on struggling veteran Thiago Santos. The co-main event features a welterweight matchup between Vicente Luque and Geoff Neal.

Prelim action is scheduled to get underway at 7:00 pm ET on Saturday night at UFC APEX in Las Vegas, with all the action available on ESPN 2. The main card follows at 10:00 pm ET on ESPN.

Thiago Santos has yet to recover from a split decision loss in his epic clash with Jon Jones at UFC 239, losing three of four subsequent contests, but remains pegged at No. 6 in the UFC light heavyweight rankings.

Jamahal Hill is coming off back-to-back first-round KO wins over Johnny Walker and Jimmy Crute that have vaulted him to No. 10 among UFC light heavyweight contenders.

Thiago Santos will be desperate for a win to maintain his tenuous grasp on a spot among the top contenders in the UFC 205-pound division. Once a feared power puncher, who has racked up 15 career wins by KO or TKO, “The Sledgehammer” has now failed to finish an opponent while going 1-4-0 over his past five fights.

The gritty 38-year-old has managed to go a full five rounds on three occasions during his current slide, and now owns the longest average fight time in UFC light heavyweight history. However, he has consistently shown signs of wearing down over the long haul during that stretch.

Ankalaev isn’t *super* comfortable leading on committed counter punchers, but he can do some cool stuff.

Pulls a straight left short, cuts Santos off, hooks to the body, hits him with the left hand at full extension, and then makes Santos miss 3 times in a row pic.twitter.com/Qh0t7BZoOn

Indeed, Santos was outstruck by a wide 36-17 margin during championship rounds in his last outing versus Magomed Ankalaev, and is unlikely to survive a similar onslaught in Saturday’s date with Hill.

Jamahal Hill has wasted no time establishing himself as a legitimate UFC light heavyweight contender so making his promotion debut in 2020. “Sweet Dreams” has lived up to his name by tallying a trio of first-round knockouts over his past five fights, and earned Performance of the Night bonuses for his recent speedy KO wins over Johnny Walker and Jimmy Crute.

This angle of Jamahal Hill’s knockout over Walker is NUTS pic.twitter.com/760sRoUzkA

However, Hill received a taste of his own medicine at UFC 263, where he mustered just one strike before suffering a broken arm during a first-round TKO loss to Paul Craig.

MY GOODNESS ??? @PCraigMMA gets the finish after Hill breaks his arm!

That setback has not negatively impacted the 31-year-old American, who ranks second all-time among UFC light heavyweights in strikes landed per minute, and enjoys a massive three-inch reach advantage over Santos.

Vicente Luque will be looking to rebound from a hard-fought unanimous decision loss to Belal Muhammad three months ago that napped an impressive four-fight win streak. The 31-year-old impressed toe-to-toe, but consistently struggled to defend against takedowns, and Muhammad’s impressive grappling.

That marked a reversal of fortune for “The Silent Assassin”, who has developed a reputation as a fearsome submission specialist after forcing first-round tap outs in his two previous outings, against Michael Chiesa and Tyron Woodley.

Geoff Neal snapped a two-fight slide with a narrow three-round split decision win over Santiago Ponzinibbio at UFC 269. Overall, “Handz of Steel” has gone the distance in each of his outings during a 1-2-0 run.

Despite his failure to get consistent nods from the judges, Neal has shown impressive stamina of late, with his strike count steadily rising over the course of his recent contests. Neal also sports a rock solid 88.0% takedown defence, which should enable him to avoid engaging Luque on the mat.

Augusto Sakai (+175): a loser in three straight outings, Sakai has poised for a rebound against Serghei Spivac, who followed up an embarrassing loss to Tom Aspinall with a recent win over former NFL star Greg Hardy.
Stephanie Eggar (-117): Eggar has quickly finished opponents in two straight outings, and is well positioned to dominate on the mat in her upcoming date with Mayra Bueno Silva.
Priscila Cachoeira (+145): “Zombie Girl” rebounded from a shaky start to earn the decision over Ji Yeon Kim last time out, and stacks up well against Ariane Lipski, who has struggled to deliver strikes and stay on her feet in two of her past three outings.