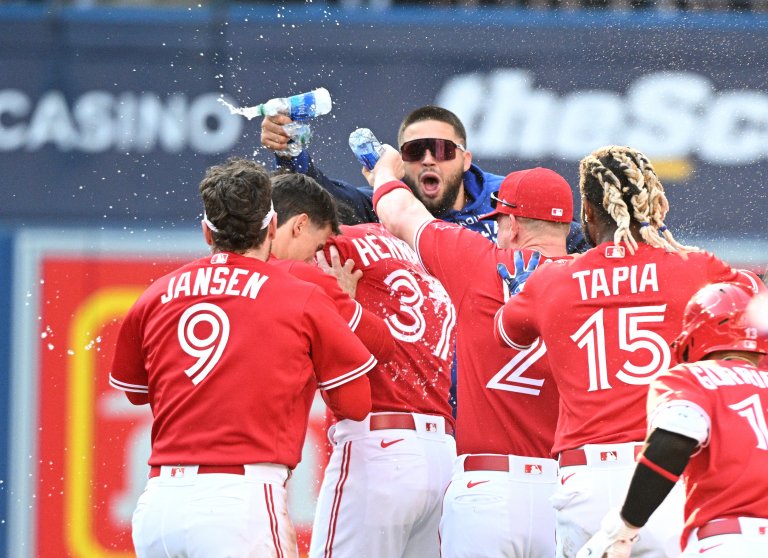 The Blue Jays are -315 home favorites over the Royals on Sunday
Lefty Kris Bubic (1-6, 6.63) will start for Kansas City against Jose Berrios (7-4, 5.38)
A look at the matchup and odds can be found below with a pick

The visiting Kansas City Royals and Toronto Blue Jays close out the unofficial first halves of their season at 12:05 p.m. ET Sunday with the finale of their four-game series leading up to the All-Star break at Rogers Center.

The Blue Jays are -315 favorites, giving them a 75.9% implied win probability in a game that will be streamed on Peacock. Toronto has +1500 World Series odds while the Royals are +200000 longshots.

The Rogers Centre roof is likely to be open as the weather forecast calls for a high temperature of 82 degrees with a mixture of sun and clouds.

Bubic is 0-2 with a 5.31 ERA in four starts since notching his lone win of the season on June 20. He had a no-decision last time against the Tigers on Tuesday in Kansas City, giving up three runs on eight hits in 5.2 innings with five strikeouts and two walks.

This will be Bubic’s first career appearance against the Blue Jays.

Jose Berrios has been pitching well lately with a 2-0 record and 3.18 ERA in his last three starts.

Berrios matched a career-high with 13 strikeouts in six innings when he beat the Philadelphia Phillies on Tuesday at Rogers Centre. He allowed three runs and six hits while not walking a batter.

The Royals’ Nicky Lopez is hitting .462 (6 for 13) off Berrios with three doubles and Ryan O’Hearn is 7 for 17 (.412) with two doubles and two home runs. Matt Chapman is the only Blue Jays hitter who has faced Bubic and he is 1 for 3 with a homer.

Teoscar Hernandez singled in the winning run as the Blue Jays rallied for three runs in the bottom of the 10th inning to beat the Royals on Saturday.

Vinny Pasquantino put the Royals on top 5-3 with a two-run home run in the top of the 10th. The Blue Jays answered with a run-scoring double by Vladimir Guerrero Jr. and an RBI single by Raimel Tapia to tie it before Hernandez delivered the game-winner.

Guerrero, who has +5000 American League MVP odds, had three hits for the Blue Jays and Alejandro Kirk and Lourdes Gurriel Jr. added two each. George Springer drove in two runs.

The Blue Jays designated veteran reliever Sergio Romo for assignment prior to the game and recalled right-hander Jeremy Beasley from Triple-A Buffalo.

The Royals got two hits apiece from Pasquantino, Bobby Witt Jr. and Michael Massey – all rookies.

The Royals placed 10 players on the restricted list before the start of the series because they were prohibited from entering Canada because of their vaccination status. Among those missing are the starting outfield of All-Star left Andrew Benintendi, center fielder Michael A. Taylor and right fielder Whit Merrifield along with rookie catcher MJ Melendez and corner infielder Hunter Dozier.

The Blue Jays lead the season series 4-2 and 25-14 against the Royals since losing to them in the 2015 American League Championship Series.

Berrios is pitching well, has yet to lose at home this season, and facing a lineup missing many key hitters. Even at very big odds, the Blue Jays are the way to go in this one.