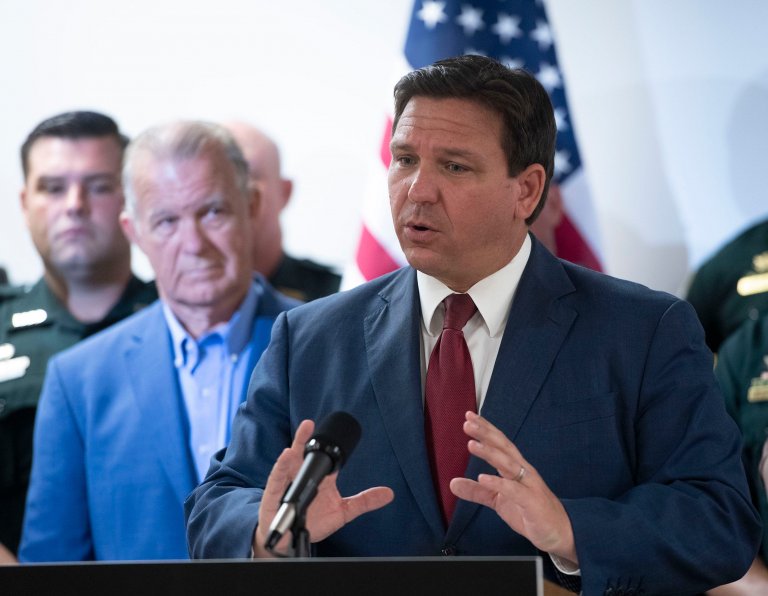 Gov. Ron Desantis addressed a group of law enforcement officers and other dignitaries at the Escambia County Sheriff’s Office on Friday, June 17, 2022. DeSantis is in town to sign Senate Bill 1808 into law. SB1808 is a new Immigration Enforcement Law.

Republican Ron DeSantis has taken over as the favorite in the 2024 US Presidential election odds
Bettors can access +300 odds on Florida Governor DeSantis
The last two Presidents, Donald Trump (+333) and Joe Biden (+525), are next in this betting market

Republicans have long been viewing Ron DeSantis as the heir apparent to Donald Trump as the next President of the USA. Lately, it’s looking as though the GOP is thinking about heir-ing on the side of caution.

As more revelations come forth about Trump’s role in the Jan. 6, 2021 insurection at the Capitol Building, it appears as though the money behind the Republican party is ready to move on from Trump and toward Florida Governor DeSantis.

This fact of life is being reflected in the latest 2024 US Presidential election odds. For the first time, DeSantis is showing as the chalk in the betting odds. He’s at +300.

While Trump certainly is maintaining his level of popularity among his MAGA cult, time appears to be running out on his reign behind the scenes. The kingmakers who finance political parties are reported to be shifting their support from the aging, raging Trump to the 43-year-old DeSantis.

As well, the right-wing echo chamber also appears to be cozying up to the Florida Governor. Much of Rupert Murdoch’s media empire is touting the benefits that DeSantis is bringing to their conservative movement.

Joe Rogan: “I think [Gov.] Ron DeSantis would work as a good president … What he’s done for Florida has been admirable.” pic.twitter.com/CGR8yTMlVr

Meanwhile, Trump continues to rant about how the 2020 election was stolen from him, even though all of the evidence proves he didn’t. As well, the majority of his close confidants have desperately tried to show him how this isn’t the case at all.

In DeSantis, the Republican power brokers see a slicker, more polished politician who can perhaps win back the moderates and undecided voters who abandoned Trump two years ago. At the same time, he’s just as willing to do the bidding of the Christian Evangelicals who look to be calling the shots for the party.

It’s vital to remember that the 2024 US Presidential election is a long way off over the horizon. A lot of water is going to flow under the respective political bridges between now and then.

Currently, singer Bruce Springsteen (+4000), wrestler/actor Dwayne “The Rock” Johnson (+5800), Fox broadcaster Tucker Carlson (+5800) and Dallas Mavericks owner Mark Cuban (+9000) are all registering in the Presidential odds (What? No Kardashians?). News flash – none of them will be moving into the White House.

I’ve been saying for months that ’24 is going to be Newsom vs DeSantis.

It’s doubtful that a Biden-Trump rematch will be in the cards but you know what might be fun? DeSantis vs California Governor Gavin Newsom (+4150). The left coast vs the right wing coast. In fact,  just this week, Newsom took out ads across Florida slamming DeSantis. The latter is running for re-election as Florida Governor in 2022.

If you’re looking to wager on the 2024 election right now, that Newsom price is offering plenty of value.