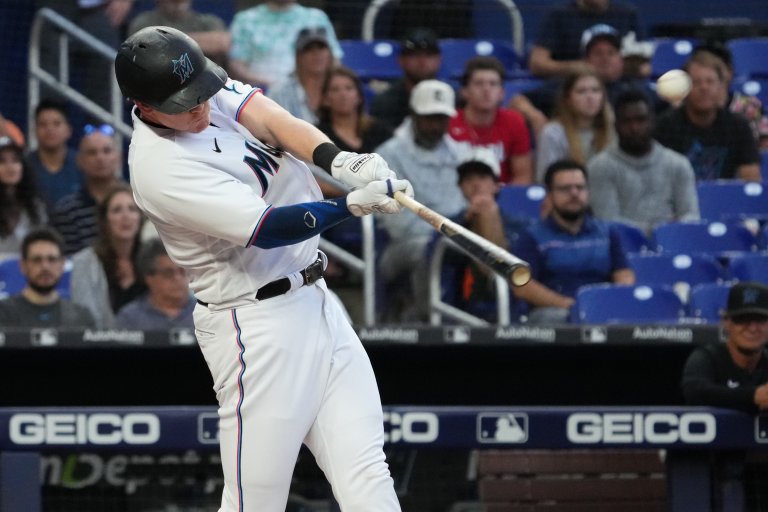 The Marlins are -134 favorites over the Rockies on Thursday
Kyle Freeland (3-5, 4.46) will start for Colorado against fellow lefty Braxton Garrett (1-2, 4.85)
A look at the Rockies vs Marlins odds can be found below with a pick

The Miami Marlins will attempt to a sweep a three-game home series from the Colorado Rockies at 12:10 p.m. ET Thursday at loanDepot Park.

The Marlins (31-36, 17-14 home) won for the third time in their last four games Wednesday night by beating the Rockies 7-4. The Rockies (30-39, 11-20 road) have lost the first two games of this series after entering on a three-game winning streak.

Odds as of June 22nd at Barstool Sportsbook.

The loanDepot Park roof will likely be closed with the gametime temperature forecast for 86 degrees.

In a matchup of left-handers, Kyle Freeland (3-5, 4.46) is scheduled to pitch for the Rockies against rookie Braxton Garrett (1-2, 4.85). Freeland will be working on five days of rest and Garrett on four.

Freeland is 2-0 with a 3.15 ERA in his last three starts, including beating the San Diego Padres last Friday in Denver despite not having any strikeouts in seven innings. He allowed four runs and eight hits while walking one.

The Denver-area native couldn’t help but think of the Stanley Cup Finals, too.

Coors Field reacts to the Avalanche win. Kyle Freeland was in the dugout pumping up the crowd pic.twitter.com/XiM3Ni5mwK

Freeland is 2-0 in his career against the Marlins with a 4.15 ERA in four game (two starts). He won in his lone appearance at loanDepot Park, a start in 2019 in which he yielded only one run in seven innings.

Garrett will be making his fourth start of the season. Last Saturday, he lost to the Mets in New York as he allowed three runs on five hits in four innings while walking two and striking out none.

In his lone start against the Rockies, Garrett lost last season as he surrendered two runs over four innings.

He might have beaten the Rox if it were table tennis.

Classy job by the Citi Field scoreboard operator for recognizing Braxton Garrett’s 2019 Marlins Ping Ping tournament championship as he was warming up for the 1st inning https://t.co/QLVkTYcHR9

Garrett’s only start at home this season came in his season debut June 5 when he was touched for four runs in 3.1 innings in a loss to the San Francisco Giants. Each of his three starts have been in the day.

The Rockies’ Charlie Blackmon is 2 for 2 against Garrett.

Freeland has had trouble with the Marlins’ Jesus Aguilar, who is 6 for 11 (.545) off him with a double and three home runs. Miguel Rojas is 2 for 5 with a pair of doubles.

Cooper two-run shot capped a four-run fourth inning that put the Marlins ahead 4-1. Chisholm, who has +2500 National League MVP odds, hit a two-run blast in the seventh and Soler added a solo blast later in the inning to break the game open at 7-1.

The Rockies’ Elias Diaz hit a three-run home run in the ninth inning.

This will be the final games of the season between the Rockies and Marlins, who have three of five in the series. Colorado holds an 11-7 edge over Miami since the 2019 season.

Betting on the Rockies on the road can often be a fool’s errand. However, Kyle Freeland has been pitching well lately and he has been very good away from Coors Field this season, making Colorado an attractive underdog.