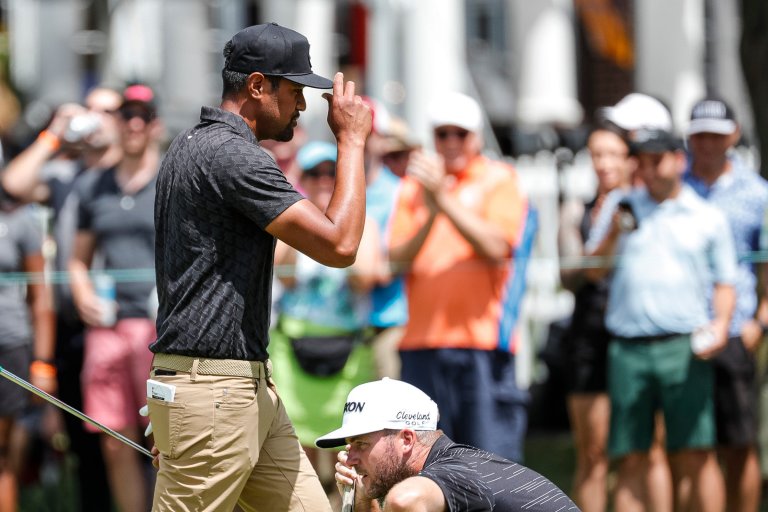 Tony Finau tips his cap after making a birdie on the second during Round 3 of the Rocket Mortgage Classic at the Detroit Golf Club in Detroit on Saturday, July 30, 2022.

It might be time to give Tony Finau a new nickname. Finau, aka top-five Tony, has long been known as a star that racks up high end results but rarely wins.

He started last week with just two career PGA Tour victories under his belt, but after a come from behind win at the 3M Open he’s threatening to go back-to-back by winning the Rocket Mortgage Classic this week.

Finau shares the 54-hole lead with Canadian Taylor Pendrith, and if he wins on Sunday we’ll have to start calling back-to-back Tony, or hot fire Finau.

Odds as of July 30th at DraftKings Sportsbook.

Oddsmakers certainly expect Finau to rack up another victory in Detroit, as he’s a -140 to claim the title. Finau and Pendrith are four strokes clear of rookie sensation Cameron Young, while pre-tournament favorite Patrick Cantlay is lurking six shots off the pace.

He’s shot rounds of 64, 66 and 65 through three days at Detroit Golf Club, and is the only player in the field yet to make a bogey. Dating back to last week he’s now shot 68 or better in seven straight rounds, amassing 41 birdies against just three bogeys.

There’s nothing about his current form that would even hint at a letdown but if you’re looking for a reason to fade him consider the following. In five previous attempts entering the final round with the lead, Finau has yet to close out a tournament.

However, given how well every aspect of his game is clicking right now fading Finau is a difficult proposition. If it’s a matter of just playing the top of the board stick with Finau, as Pendrith showed signs of cracking coming in on Saturday, and has never finished inside the top-five on the PGA Tour.

Tied for the lead at the Rocket Mortgage Classic at 21-under 195, here’s a look at Tony Finau and Taylor Pendrith’s record with the 54-hole lead/co-lead on the PGA TOUR:

He also never won on the Korn Ferry Tour before earning this PGA card, with his only two career victories coming on the Canadian Tour back in 2019.

Cameron Young (+1000): Given how easy Detroit Golf Club is playing this week, even a bad round by Finau or Pendrith will likely come in south of 70. That winning score is likely to be at least -24 or -25 meaning it’s going to take a heroic round from one of the chasers to steal the trophy away. One such player capable of that is Young. The rookie has shot rounds of 65 and 63 in consecutive days, pouring in 15 birdies and an eagle. He ranked second on Saturday in strokes gained tee-to-green and ball striking, and is fresh off shooting a Final Round 65 at the British Open to grab his fourth runner-up finish of the season.
Patrick Cantlay (+3500): No disrespect to the rest of this leaderboard, but if somebody is going to chase down Finau and Pendrith it’s going to be either Young or Cantlay. Like Young, Cantlay struggled in the opening round otherwise he’d be right there with the leaders. After a First Round 70, Cantlay has posted rounds of 65 and 66 while pouring in 15 birdies. The reigning FedExCup was top-four in the field on Saturday in strokes gained ball striking, off-the-tee and putting, and certainly has a round in the low 60’s in him. A sprinkle at +3500 is too good a value to pass up.