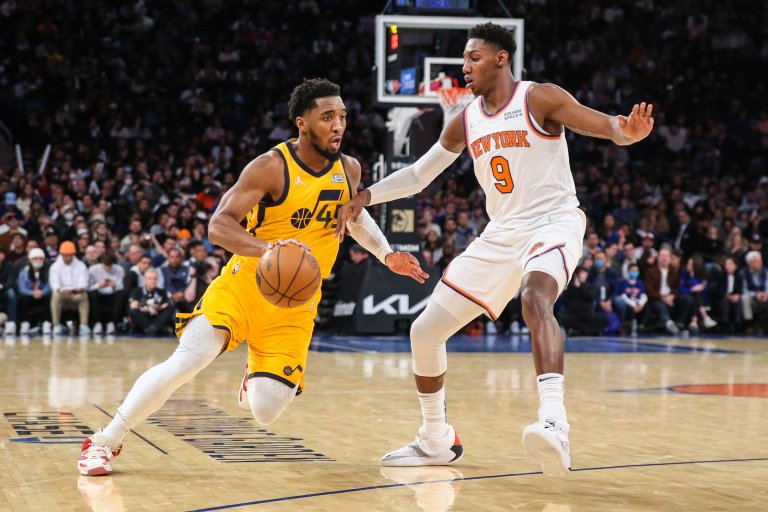 New York Knicks championship odds up to +7000
The steadily improving odds suggest a big trade (Donovan Mitchell) is looming
Read on to find betting odds and analysis about the Knicks 2022-23 title chances, and their chances at landing Mitchell

The New York Knicks always find themselves in the spotlight when it comes to the NBA. New York is one of the largest sports markets in the United States, and Knicks fans generally have high expectations. However, the Knicks championship odds haven’t reflected these same ambitions in quite some time.

The Knicks haven’t been viewed as a genuine threat to the Eastern Conference in quite some time by the NBA betting world. However, thanks to some recent trade rumors around a certain disgruntled Utah Jazz superstar, the Knicks are slowly but surely climbing their way back into the NBA championship odds picture.

Knicks Championship Odds Have Shifted From +15000 to +7000 This Offseason

The Knicks being +7000 to win the NBA Finals doesn’t look like a big deal on paper. However, it’s crucial to note that they opened the offseason at +15000.

In just a few short months, New York has seen their odds improve by +8000. That’s significant movement, even for a team that made a big free agency splash in Jalen Brunson.

Of course, landing Brunson on a four-year/$104 million contract is a big reason the Knicks championship odds improved in the first place. Adding Brunson gives them another scoring threat on the perimeter to pair alongside RJ Barrett.

However, earlier this week the Knicks were at +8000. Now they’re at +7000. They didn’t make any notable moves over the past few days worthy of an odds change. Instead, this recent movement is likely due to some warm trade rumors involving Donovan Mitchell.

The Jazz and Knicks have started talks on a potential Donovan Mitchell trade, per @ShamsCharania and @Tjonesonthenba

Utah is focused on “obtaining draft picks” and there are no “untouchable players” currently on the roster pic.twitter.com/Ev7rBraO6E

Donovan Mitchell to New York Is Picking up Steam

Following the Jazz’s decision to offload Rudy Gobert and Royce O’Neal for draft picks, a full-scale rebuild taking place in Utah appears to be the plan.

Heavy trade rumors involving Mitchell have been circulating over the past few weeks, and the Knicks wasted little time getting their name into the conversation.

As of July 14, the Knicks are the betting favorite when it comes to Donovan Mitchell next team odds.

Knicks Championship Odds – Can Donovan Mitchell Get Them Over the Hump?

As things currently stand, the Knicks are still being viewed as a serious long shot to win the 2022-23 NBA Finals — an understandable reality considering the state of the Eastern Conference. The Boston Celtics, Milwaukee Bucks, Brooklyn Nets, Miami Heat, Philadelphia 76ers, Toronto Raptors, Chicago Bulls, and Atlanta Hawks are all currently positioned above New York on Caesars Sportsbook.

However, should the Knicks land Mitchell in some sort of massive blockbuster trade, expect those odds to dramatically change. The Knicks adding Mitchell should see them jump the likes of Toronto, Chicago, and Atlanta.

Will the Knicks actually win the 2022-23 NBA Finals with Mitchell on the roster? No, probably not. They probably wouldn’t even make it past the second round. Still, there still could be some value in grabbing them at +7000 before the line changes again.