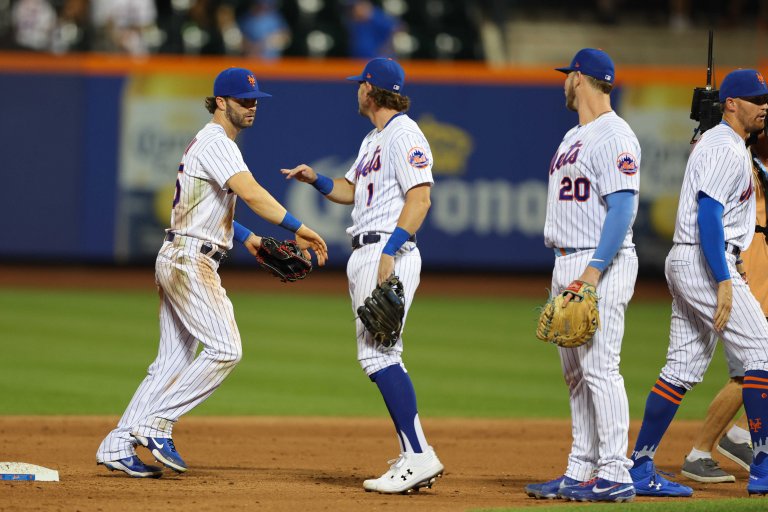 The New York Mets are heavy -320 home favorites over the Cincinnati Reds in a National League afternoon game scheduled for Wednesday, August 10
New York is 5-1 straight on the club’s current 11-game home stand
Below, see the Reds vs Mets odds and best bets for Wednesday

The New York Mets (71-39, 36-18 home) did something on Monday that neither they or the Cincinnati Reds (44-64, 20-32 away) have accomplished through the previous eight meetings between the two clubs.

They won back-to-back games. However, entering play Tuesday, neither team had won three in a row in this series since 2017.

The Mets are heavily-favored to get the best of the Reds again on Wednesday. New York is the overwhelming -320 chalk. The Mets are 25-23 against the run line as a home favorite this season.

First pitch at Citi Field is set for 1:10pm ET on Wednesday, August 10. Cloudy skies with 12 mph wind and a temperature of 84 degrees are in the weather forecast.

Odds as of August 9 at Caesars Sportsbook.

The Reds are planning to select right-hander TJ Zeuch and activate him to pitch on Wednesday afternoon against the Mets. Although he’s not currently on the 40-man roster, Zeuch is with the team in New York and the Reds have an available place to add him. Then all they’ll need to do is clear space for Zeuch on the active roster.

A 2016 first-round pick of the Toronto Blue Jays, Zeuch was with the St Louis Cardinals Triple-A club this season. He was recently designated for assignment after posting an 11.64 ERA. The Reds put in a claim for Zeuch.

He most recently pitched in MLB in 2021 with the Blue Jays. Zeuch made five appearances, including three starts and was 0-2 with a 6.60 ERA.

Zeuch has never previously faced the Mets. He’s 1-2 with a 5.00 ERA in five day-game appearances, including three starts.

Mets right-hander Taijuan Walker is enjoying his best MLB season in terms of winning percentage (.750). He’s two shy of his career-best 11 wins posted in 2015 with the Seattle Mariners. He and Zeuch were both members of the 2020 Blue Jays.

However, Walker was shelled in his last start. The Atlanta Braves tagged the Mets righty for eight earned runs and seven hits, including two home runs, in just an inning of work. Walker took the loss in a 9-3 setback. It was his first defeat since June 7, ending a six-game winning streak.

good morning to all members of the new york mets, but especially taijuan walker pic.twitter.com/cOzh18eadW

Walker has allowed five home runs over his last 12.2 innings on the mound. He’d surrendered just one long ball over his previous 36 innings of work.

No Mets batter has previously faced Zeuch in an MLB game.

The Mets have scored at least five runs in each of their last seven victories over the Reds. During those seven victories, New York is 6-1 against the run line.

Cincinnati is desperate for starting pitching. The Reds traded Tylor Mahle and Luis Castillo and lost Hunter Greene to the IL. Zeuch is 0-2 with a 4.30 ERA in seven career MLB starts.