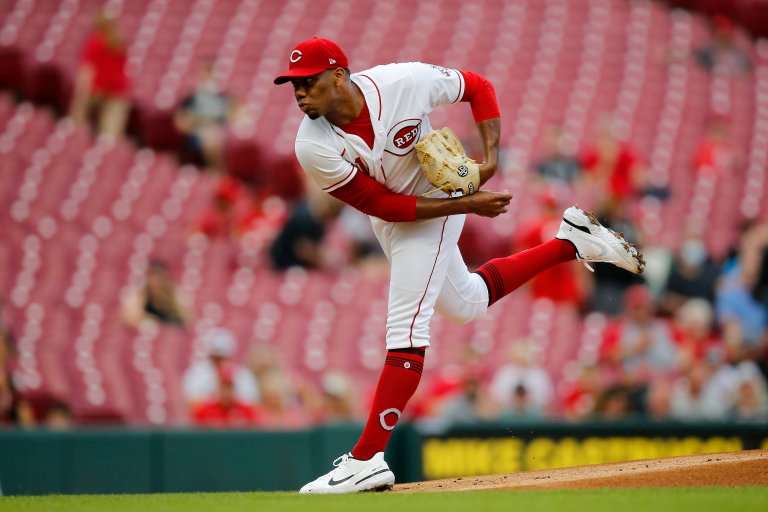 Cincinnati Reds starting pitcher Hunter Greene (21) throws a pitch in the first inning of the MLB National League game between the Cincinnati Reds and the Miami Marlins at Great American Ball Park in downtown Cincinnati on Tuesday, July 26, 2022.

The Reds and Marlins start a three-game set on Monday evening
Cincinnati has won two in a row, while Miami has dropped three straight
The Reds vs Marlins odds, preview, and predictions can be found below

Monday marks the beginning of a three-game National League set between the Cincinnati Reds (40-61, 16-29 away) and the Miami Marlins (47-55, 22-26 home) at loanDepot park in South Beach. The first pitch for the series opener is scheduled for 6:40 PM ET.

The Reds go with former first overall pick Hunter Green here. The Marlins have yet to announce their starter, but it’s widely expected Jesus Luzardo will return to the big leagues after almost three months on the IL.

Odds as of July 31st at FanDuel Sportsbook.

Greene has been in the Majors for most of the season, but he’s struggled to find success in his rookie campaign. The hard-throwing righty is 3-12 with a putrid 5.59 ERA in 19 starts and while Greene has struck out 119 in 96.2 innings, he’s allowed 23 home runs.

Cut this out, Hunter Greene.

What the hell is this? pic.twitter.com/Yp51Prjz9w

On a more positive note, his last start was respectable. Greene actually faced the Marlins, giving up two earned across 6.1 innings. He walked just one hitter while striking out six. Greene will be hopeful of a similar outcome on Monday.

Luzardo was dealing with forearm soreness which kept him on the shelf for quite some time. He finally made some rehab starts recently and tossed 75 pitches on Wednesday in Triple-A, going 4.2 innings and allowing two earned runs on four hits. All signs point to him getting the ball on Monday, considering he’ll be on five days’ rest.

Monday’s Marlins starter has not yet been announced. Expected to be the long-awaited return of Jesús Luzardo! pic.twitter.com/hUsVWL8eb5

On the year, the lefty is 2-3 with a 4.03 ERA in six outings. He’s racked up 41 K’s in 29 innings but surrendered 16 free passes. Luzardo will likely be on a shorter leash but he has enjoyed success against Cincinnati, throwing six scoreless innings earlier in his career.

Nothing is going right for the Reds this season but lately, they’re actually looking a lot better. Cincy is 6-4 in their last 10 games and just took two out of three from the Baltimore Orioles, including a 3-2 win on Sunday.

Nick Lodolo threw a gem, tossing six innings of one-run baseball while striking out seven. His bullpen also clutched up, holding the O’s to just two hits once Lodolo exited. Offensively, Brandon Drury played hero, slugging his 20th home run of the season in the bottom of the eighth to give the Reds the lead for good.

Yes, Miami still has a better record than the Reds, but they expected to be fighting for a Wild Card spot. That’s slowly and slowly slipping further out of reach, now sitting eight games back in the NL WC race. The Marlins were just swept by the Mets and Pablo Lopez, who is a possible trade candidate, was lit up.

Marlins Pablo López will start today against the Mets. Seems like nothing is imminent with him. If they deal him, I get the sense it’s probably a last minute Tuesday deadline thing. Otherwise he’s staying.

The Fish’s second-best starter behind Sandy Alcantara (-170 in NL Cy Young Odds) gave up 12 hits and six earned in a mere 2.2 innings of work as he took his sixth loss of the campaign in the 9-3 loss. Miami’s offense managed to bang out 10 hits but struggled immensely to capitalize, stranding 10 runners.

Greene’s ERA skyrockets to almost six on the road and although Luzardo hasn’t pitched in awhile in the Majors, I do think the Marlins will end the losing streak here. After all, they did take two out of three from Cincinnati earlier in the week. Take Miami on the moneyline.