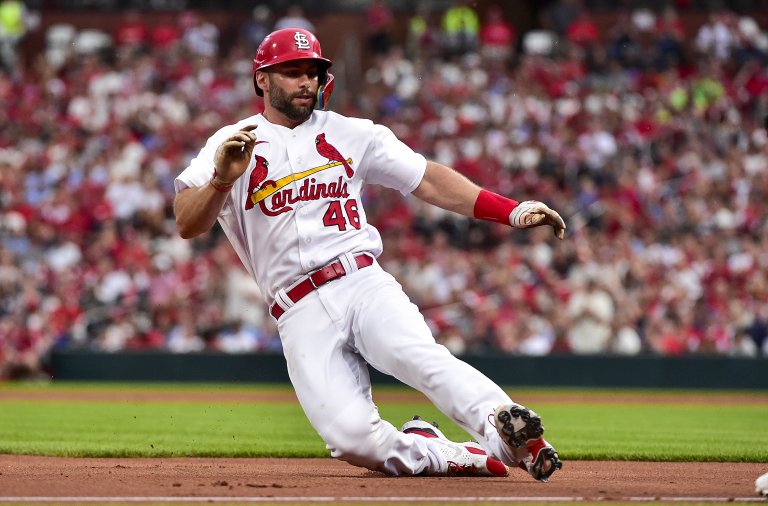 The Cardinals are -175 home favorites over the Reds on Saturday
Rookie Hunter Greene (3-7, 5.40) will start for Cincinnati against Adam Wainwright (5-4, 2.73)
A look at the matchup and odds can be found below with a pick

The St. Louis Cardinals will look to stay on the winning track when they host the visiting Cincinnati Reds at 2:15pm ET Saturday in the middle game of a three-game series at Busch Stadium.

The National League Central-leading Cardinals (33-26, 17-11 home) snapped a three-game losing streak by blanking the Reds 2-0 on Friday night in the series opener. The Reds (20-38, 8-21 road) have lost three games in a row and six of their last eight.

Odds as of June 10th at Barstool Sportsbook.

The weather forecast calls for a high of 87 degrees, partly sunny skies and light wind.

Rookie Hunter Greene (3-7, 5.40) is scheduled to pitch for Cincinnati against Adam Wainwright (5-4, 2.73). Greene will be working on four days of rest and Wainwright on five.

Greene is coming off an outstanding performance Monday when he shut out the Arizona Diamondbacks on one hit over seven innings for the win. It became both his first career shutout and complete game when the game was shortened because of rain.

Daulton Varsho led off the game with a bunt single, but Greene retired the next 20 batters, finishing with eight strikeouts and no walks.

Greene will be facing the Cardinals for the second time in his nascent career. He lost to them April 22 in St. Louis when he allowed three runs in 3.1 innings.

Wainwright is 0-1 in his last three starts despite a fine 2.37 ERA.

Last Sunday against the Cubs in Chicago, Wainwright failed to record a strikeout in seven innings in a no-decision. He gave up two runs, nine hits and two walks.

The Reds’ Joey Votto has had sustained success against Wainwright, hitting .317 (19-for-60) with six doubles, four home runs and 10 walks. Tommy Pham is 6-for-9 with a double off Wainwright but Albert Almora Jr. is hitless in 11 at-bats.

Rookie Andre Pallante took a shutout into the sixth inning in second major league start to lead the Cardinals over the Reds on Friday night.

Cardinals catcher Yadier Molina is expected to be back in the lineup and paired with Wainwright after not starting the previous three games because of general soreness.

Right fielder Dylan Carlson was activated from the injured list before Friday’s game after being out since May 22 with a strained left hamstring. He went 1-for-3.

Reds catcher Tyler Stephenson was placed on the injured list before the game with a fractured right thumb. He was hurt Thursday when he struck by a foul ball in a loss to the Arizona Diamondbacks.

Center fielder Nick Senzel (lower back strain) missed his third straight game and left fielder Albert Almora Jr. (sprained shoulder) was also out Friday. Both are expected to be available Saturday, though Almora could stay on the bench because of his struggles against Wainwright.

The Cardinals have taken three games from the Reds so far this season and hold a 105-76 advantage in the series since the start of the 2012 season.

Greene showed Monday he can be dominant but it’s hard to go against the great veteran in Wainwright. Thus, the lean, albeit a slight one, goes to the Cardinals.