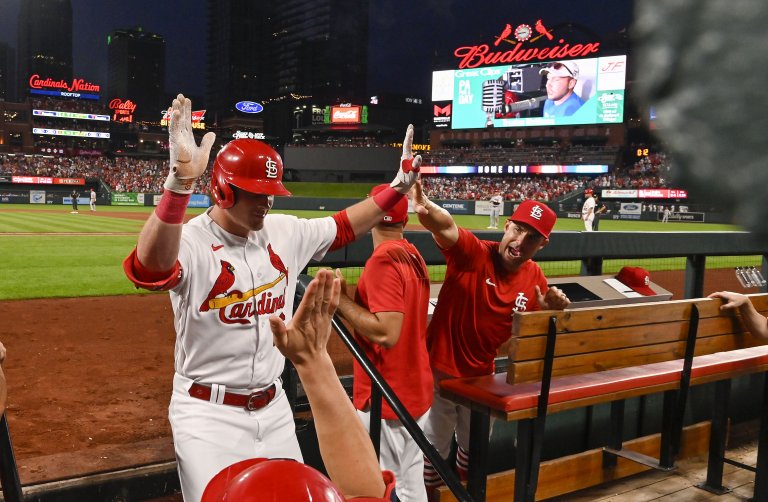 The Cardinals are -165 home favorites over the Reds on Saturday
Rookie Nick Lodolo (2-2, 4.44) will pitch for Cincinnati against Miles Mikolas (6-7, 2.62)
A look at the Reds vs Cardinals odds and matchup can be found below with a prediction

The host St. Louis Cardinals look to make it two wins in a row over the Cincinnati Reds when the teams meet at 2:15 pm ET Saturday in the middle game of a three-game series at Busch Stadium.

Odds as of July 15th at Caesars Sportsbook.

The weather forecast calls for a rainy day with an 80% of showers and thunderstorms, a high temperature of 86 degrees and wind from the southwest at 13-16 mph.

Lodolo, who will be making his sixth career start, has won his last two times outs and is 2-0 with a 2.35 ERA in his last three outings.

Last Sunday, Lodolo beat the Tampa Bay Rays in Cincinnati. He gave up three runs and nine hits in five innings with six strikeouts and one walk.

Nick Lodolo gets a well-deserved standing ovation from the home crowd, including the Hall of Fame shortstop in the booth! pic.twitter.com/2XUMkluDKt

Lodolo will be making his second start against the Cardinals. He notched his first major league win against them April 24 in St. Louis when he yielded only one run in 5.2 innings.

Lodolo has started only once on the road, losing to the Padres on April 18 in San Diego as he surrendered three runs in five innings. He is 2-1 with a 5.52 ERA in three starts during the day and the Reds are 3-2 overall when Lodolo pitches.

Mikolas ended a three-game losing streak Monday when he allowed only one run in six innings to beat the Philadelphia Phillies at Busch Stadium. He scattered six hits while striking out five and walking none.

He is a holistic kind of guy.

Miles Mikolas is out burning sage on the field this morning. pic.twitter.com/sm6GxzdP1A

Rookie Brendan Donovan had two hits and three RBIs to lead the Cardinals over the Reds on Friday night.

A couple of pop flies, a couple of RBI. pic.twitter.com/c8Nl2lXVMI

The Cardinals placed rookie outfielder/first baseman Juan Yepez on the injured list prior to the game with a strained right forearm. Outfielder Lars Nootbaar was recalled from Triple-A Memphis.

Donovan Solano and Nick Senzel had two hits each for the Reds. Kyle Farmer drove in two runs.

Lodolo looks like he has his feet on the ground in the major leagues and is ready to live up to his billing as the Reds’ first-round draft pick (seventh overall) in 2019. He is a solid play as an underdog.