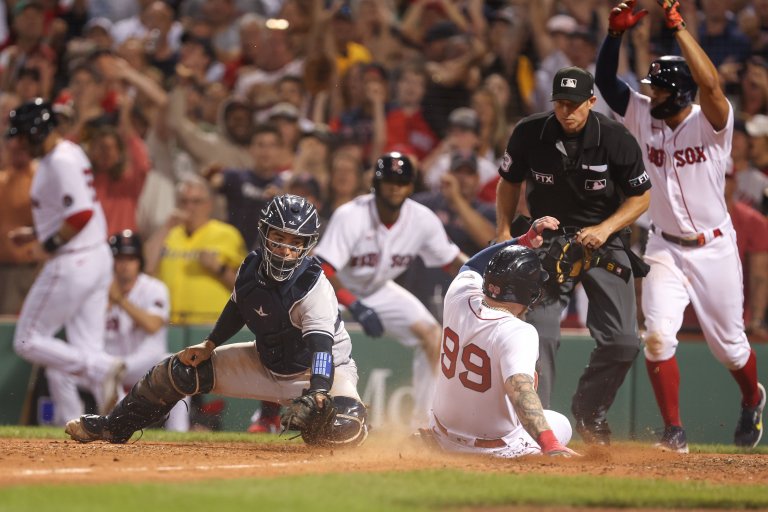 The New York Yankees are -178 home favorites over the Boston Red Sox in an American League game on Friday, July 15
New York is 7-1 straight up in the past eight games against Boston at Yankee Stadium, but the Red Sox are 18-9 against the runline as a road underdog this season
Below, see the Red Sox vs Yankees odds, starting pitchers, betting trends, and picks

The most bitter rivalry in baseball is up for renewal again as the Boston Red Sox (47-43, 24-23 away) visit the New York Yankees (62-27, 35-11 home) to open a three-game weekend series between these AL East opponents.

Neither club is exactly tearing it up as they ready to clash on the diamond. The Yankees entered play 5-6 straight up through their last 11 games. Meanwhile, Boston was a dismal 3-8 SU over the past 11 games.

The news grows even more grim for the Red Sox when trips to the Bronx are introduced into the equation. Boston is 1-7 SU over the past seven games played between the two teams at Yankee Stadium.

Oddsmakers are expecting that MLB betting trend to be continuing. It’s the Yankees who are slotted in as the -178 home favorites for this game. New York is 35-11 SU as a home favorite this season. That’s a .761 winning percentage.

First pitch at Yankee Stadium is set for 7:05pm ET on Friday, July 15. Sunny with cloudy periods are in the weather forecast, with 3 mph wind and a temperature of 75 degrees.

New York is a -178 favorite, giving the Yankees an implied probability of victory of 64.03% in the MLB betting line. A successful $10 wager on New York would deliver a payout of $15.60.

In the MLB Division odds, the Yankees are showing as the -220 odds-on favorites to win the AL East. Boston is listed at +3000 to win the division. The MLB pennant odds also display the Yankees as the chalk at +180, with the Red Sox at +1300. In the World Series odds, New York is given a betting line of +400, while odds of +2800 are available on Boston.

Red Sox right-hander Nathan Eovaldi is being activated from the 15-day IL to start the opener of this series. He’ll be making his first start since June 8 after being idled by lower back and hip ailments. He’d actually won his last three starts prior to his stint on the IL.

“He’s the guy that has been dominant against the A.L. East opponents, where not a lot of other people on the Red Sox staff can say complete dominance.”

Eovaldi opened the season April 8 by allowing three earned runs and five hits over five innings during a 6-5 loss to the Yankees. He didn’t figure in the decision.

It should be a game that moves along at a good clip. Both Eovaldi (1.10) and Yankees left-hander Jordan Montgomery  (1.03) display stellar WHIPs. Montgomery also isn’t about issuing free passes. He’s among the top 8% in MLB pitchers with a 4.7 bases on balls percentage.

He has faced the Red Sox twice this season – a 6-5 loss on July 9 and a 4-3 setback on April 10. Montgomery wasn’t a factor in either decision. He’s showing a 5.00 ERA in nine innings of work against Boston.

Anthony Rizzo singles to put the Yankees up 2-0 right away! pic.twitter.com/Bc4xulLj1d

New York has the best home record in baseball and seven wins in the last eight at home against Boston.

Ain’t that the truth. pic.twitter.com/H8u9lw3XwC

Eovaldi figures to be rusty making his first big-league start in over a month.