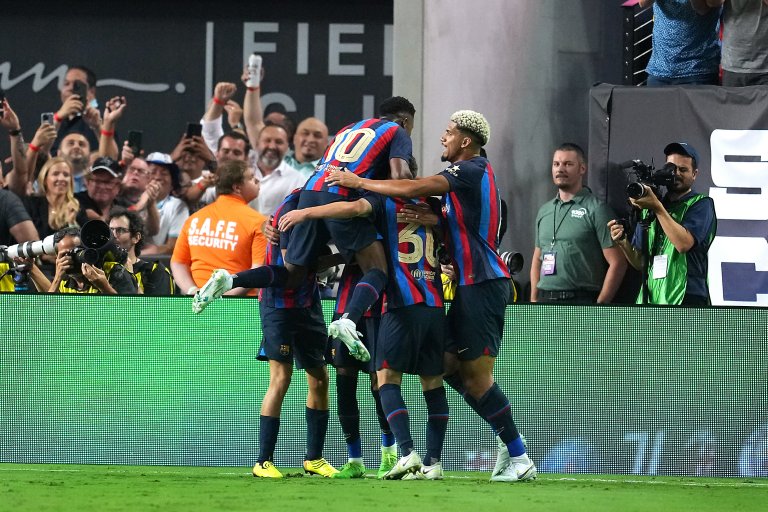 Real Sociedad hosts Barcelona in the second weekend of La Liga play on Sunday, August 21st at 4:00 pm ET
The match is being played at the Anoeta Stadium in San Sebastián, Spain
Get the Real Sociedad vs Barcelona odds, analysis, and betting prediction below

Barcelona travels to San Sebastián on Sunday in hopes of improving their La Liga start. Of course, last weekend they kicked things off with a frustrating nil-nil draw, at home, to Rayo Vallecano. Despite Xavi’s side having 21 shots and 68% possession, they just could not convert in the final third.

In reality, the result could have been even worse for Barcelona. Falcao put the ball in the back of the net in the 95th minute for Rayo, but was deemed offsides. Moreover, two yellow cards for Sergio Busquets in that game leaves a major hole in the Barcelona midfield on Sunday.

Conversely, Real Sociedad started their season off with a solid 1-0 victory over Cadiz. New Japanese signing, Takefusa Kubo, scored a wonderful volley, endearing himself to Los Txuri-Urdin fans early. Overall, they should be a challenge for Barcelona, in the first top-six matchup from last year’s league table.

Now, the moneyline odds for this match have plus odds on each play, but Barcelona are still the favorites at +110. In fairness, they have owned this head-to-head battle in recent years. Actually, the last time Real Sociedad saw victory against Barcelona was in 2016. In the 15 games since, they are 0-3-12 against the Blaugrana, getting outscored 16-36.

Additionally, I would expect heaps of goals in this match. It is hard to imagine Barcelona getting shut out in back-to-back weeks, and this matchup usually brings quite of bit of flare in attack. While their last battle ended with just a single goal, they are averaging 3.8 total goals in their last five meetings. Currently, the over on 2.5 total goals sits at -130, which is a little juicy to be fair.

Again, in the same fashion, I would lean on Robert Lewandowski to score at -125. The word ‘duck’ and Lewandowski just do not mix and if anyone scores for Barcelona, I would favor it to be him.

Xavi’s Side Needs Time to Blend

As I said in my La Liga futures article, this Barcelona side just needs time. Their odds to win La Liga sit at +120, even with Real Madrid, but it is evident their chemistry is feeble.

To make things worse, they have to throw Franck Kessie into the heart of their spine. Do not get me wrong, Kessie is a fantastic midfielder, but starting as the six for Barcelona is a whole different ballgame.

Also, their off-the-field issues have hardly silenced. Pierre-Emerick Aubameyang looks like he could be off to Chelsea, and Jules Kounde still sits away from the bench, as an unregistered player.

Xavi on Aubameyang-Chelsea: “We don’t know what will happen. Right now he’s our player, he’s important but the circumstances will tell”. ?? #FCB

“At the moment neither Auba nor Memphis have left… now the priority is to register Koundé”. pic.twitter.com/R23lYtpNOO

Nonetheless, there is a path for Barcelona to get something from this fixture. Essentially, both Ousmane Dembele and Raphinha have to be better on the wings. They were involved against Rayo, but ultimately could not provide any final service into Lewandowski. The duo were able to do this in the preseason, but it is not clear to this point if they can do the same against highly organized defenses.

This also goes without saying that Real Sociedad offer some threatening pieces with the likes of David Silva, Aleksander Isak and Kubo. This will be their first match of the year in front of home fans and do not forget, Barcelona drew 42% of their away matches last year.

Finally, the best bet for this match is the draw moneyline at +260. This is a risky bet, but I just do not see Barcelona winning this game at this point in the season.