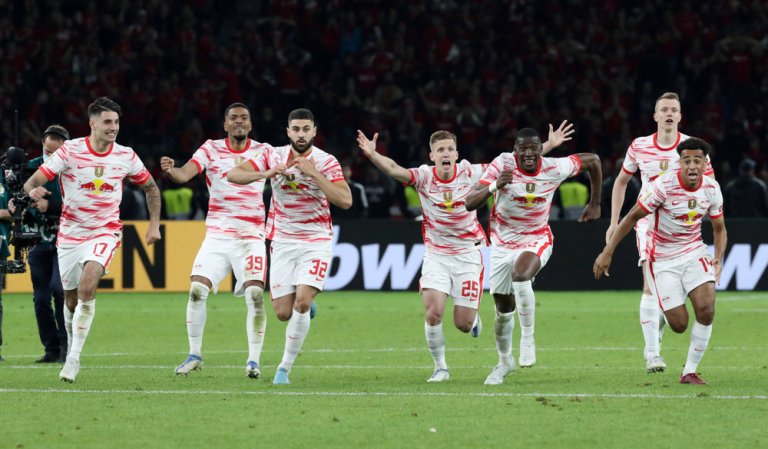 RB Leipzig hosts Bayern Munich in the German Super Cup on Saturday, July 30th at 2:30 pm ET
The match is being played at Red Bull Arena in Leipzig, Germany
Get the RB Leipzig vs Bayern Munich odds, analysis, and betting prediction below

The Bundesliga season is coming right around the corner on August 5th. But, we first have to play the German Super Cup. This preseason final puts the winner of the Bundesliga against the winner of the DFB-Pokal, Germany’s premier knockout tournament. This year, we are in for a treat as RB Leipzig takes on the ten-time, consecutive Bundesliga champions, Bayern Munich.

To be frank, RB Leipzig had a bit of a downer last year. Domenico Tedesco’s side dropped two places and seven points in the table from the year prior. The alarming issue with RB Leipzig is that their summer business has been scarce aside from the departures of several key talents, including: Tyler Adams, Brian Brobbey and Nordi Mukiele.

Conversely, Bayern Munich also lost one of their best talents in Robert Lewandowski. Nonetheless, with the additions of Sadio Mane, Matthijs de Ligt and Ryan Gravenberch, they are still a deadly side.

Overall, the moneyline odds for this preseason cup match favor Bayern Munich at -123. Honestly, while there is some juice on that play, it is not as much as you would often expect with the Bavarians. In fact, Bayern have won five out of the last six German Super Cups, winning the last two against Borussia Dortmund.

🎙️ Head coach Domenico Tedesco speaks at the official press conference ahead of the #Supercup:

“We want to win everything that there is to win. This will be our first Supercup and we’re really looking forward to Saturday’s game against FC Bayern.”

Furthermore, handfuls of goals are expected in this Super Cup final with the total line set at 3.5. The under on the total has odds of -150, while the over has valuable plus odds of +120. Four of the last five German Super Cups have broke this tally along with three of their previous four head-to-head meetings.

Additionally, Mane has +400 odds to score against RB Leipzig, which is a great price for the Senegalese forward. He was rested in Bayern’s last preseason affair with Man City, and Mane will surely want to put one last impression on Nagelsmann before the season starts.

Of course, it is also never too early to start looking at Bundesliga odds. Bayern Munich are the far and away favorites at -500.

Do Not Expect Bayern’s Offense to Slow Down
The loss of Lewandowski is truly a landmark moment for Bayern Munich. In many ways, he represented this profound era of Der FCB. Despite this, the changes Bayern has made feel like a breath of fresh air.

Nagelsmann not only has two elite wingers in Sane and Serge Gnabry, but also two extremely versatile front men in Mane and Thomas Muller. With a selection of strong wing-backs, the formations and combinations Bayern can play with are endless.

In turn, I expect this final preseason game to serve as a simulation more than anything for Bayern. They will toy with RB Leipzig, test out some formations, and inevitably lift another piece of German hardware.

Trust me, if you watched Leipzig’s second preseason match against Liverpool, you would also believe that they really do not stand a chance. With Christopher Nkunku and Andre Silva, I do fancy a goal for Die Rotten Bullen, but nothing more as they have failed to beat Bayern in nine tries.

Finally, the best bet for this match is the Bayern Munich moneyline plus the over on 2.5 goals hitting, with odds of +145. This is a great value pick that should kick off a great year of Bundesliga plays.