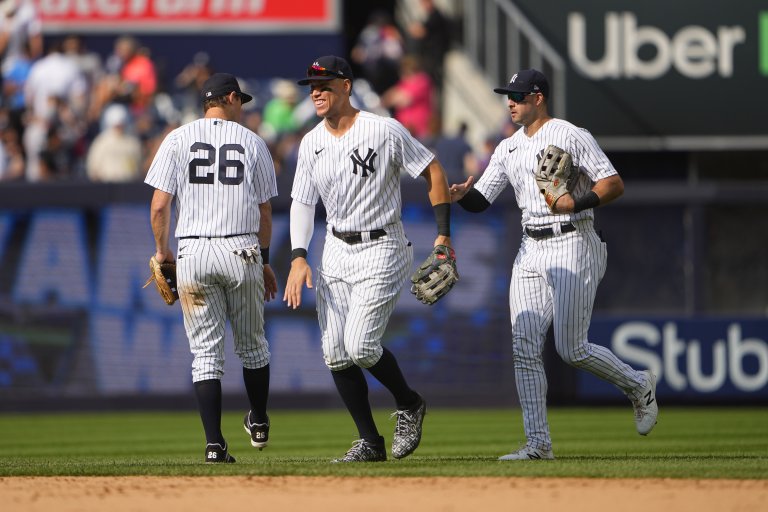 AL East rivals clash on Tuesday as the Tampa Bay Rays look to slow down the scorching hot New York Yankees. The Bronx Bombers enter play winners of 11 of their past 12, and the owners of baseball’s highest winning percentage and best run differential by a wide margin.

New York has opened up an eight game lead over Toronto and a nine game advantage over Tampa Bay atop the division, and oddsmakers expect the gap between them and the Rays to increase on Tuesday.

The Yankees opened up as -220 moneyline favorites in a contest that features a total of 8. First pitch is scheduled for 7:05 pm ET at Yankee Stadium in New York, NY, with a sun-cloud mix and 79 degree game-time temperatures in the forecast.

Former Yankee Corey Kluber will get the ball for Tampa Bay, looking to continue his strong season. The 36-year-old has gone five straight outings without giving up more than three runs, a stretch that includes an impressive performance against New York.

Last month he held the Yankees to a single run over 6 innings in a 3-1 victory, which marked one of New York’s worst offensive games of the season. Going back to his tenure with Cleveland, Kluber has fared quite well against the Yankees in the past, holding current New York batters to a .244 average in 133 at-bats. But, as we’ll explore later, this edition of the Yankees is one to fear regardless of previous track records.

New York, who shockingly don’t own the shortest World Series odds, will counter with Gerrit Cole. The righty is fresh off arguably the worst start of his career, where he was absolutely rocked by Minnesota. Cole surrendered eight hits and seven runs in just 2.1 innings of work. Five of those hits were homers, including three consecutive dingers on the first seven pitches he threw.

And Gerrit Cole is the first pitcher in Yankees history to allow 3 HR to the first 3 batters of any game pic.twitter.com/zFACMssl6a

Cole shut down Tampa Bay in his lone meeting this season with them, yielding only one run while striking out 10. Historically however, the Rays have had his number as they’re batting .341 versus him, with an .838 OPS in 119 at-bats.

The Rays are not an impressive offense, but something about facing Cole has resulted in plenty of success, particularly for Ji-Man Choi and Yandy Diaz. Choi is 8-for-16 lifetime against the AL Cy Young odds contender, with three homers. Diaz meanwhile, has never taken Cole deep, but is still 10-for-26 with 5 RBI.

Tampa Bay ranks below league average in runs per game, but are starting to find a rhythm with the bats. They scored 15 runs in a three-game set with the Twins over the weekend, after crossing the plate 17 times in three contests against St. Louis.

New York on the other hand, is the highest scoring team per game in the AL, and tops in the Majors in home runs, slugging percentage and OPS. Their +127 run differential is 26 runs better than any other team in baseball, while they’ve been especially dominant at home.

The Yankees are 26-7 at Yankee Stadium, which is six more home wins than the next closest team. They boast a higher slugging percentage (.467) and OPS (.801) in their own park than on the road, and have scored at least six runs in the Bronx in four of their past eight games. They’re fresh off crossing the plate 28 times against the Cubs over the weekend, and there isn’t an easy out to be found in their lineup.

Aaron Judge is the AL MVP odds leader, while both Giancarlo Stanton and Anthony Rizzo are top-18 contenders. Six of their past eight games have produced at least eight runs, and they’re more than capable of clearing this total on their own.

If they do need help from Tampa, the Rays recent offensive surge and strong track record against Cole certainly won’t hurt. Let’s target over eight runs on Tuesday.