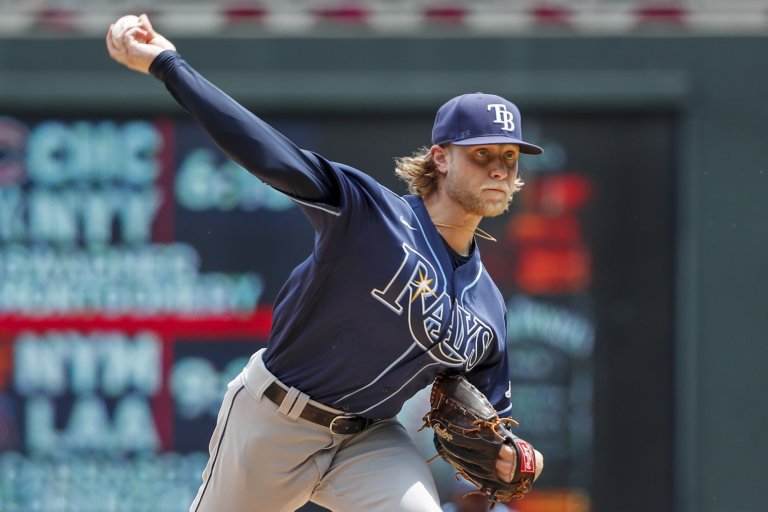 The gametime temperature is forecast to be 89 degrees with a low of 68, clear skies and northwest wind from 5-10 mph.

This will be Baz’s second start for the Rays in 2022 after he underwent arthroscopic elbow surgery during spring training and began the season on the injured list.

Baz had a rough season debut against the Twins last Saturday in Minnesota. He took the loss as he was tagged for five runs and three hits in 2.1 innings while walking three and striking out two.

The Twins didn’t mess with Baz’s dad, though.

Shane Baz’s dad can beat up your dad pic.twitter.com/rDjDvrRX2c

In four rehab starts at Triple-A Durham, Baz had no record but a sparkling 1.38 ERA.

Baz will be facing the Orioles for the first time in his career.

Kremer will be making his third start since being called up from Triple-A Norfolk.

Kremer notched his first win of the year Sunday against the Royals at Kansas City. He went five innings and allowed two runs (one earned) and four hits while striking out two and walking two.

This will be Kremer’s third career start against the Rays, and he is 0-1 with a 5.63 ERA against them.

Kremer will be making his first night start of the season. He lost his lone start at Camden Yards on June 5 against the Cleveland Guardians, surrendering three runs in 4.1 innings.

Cedric Mullins had three of the Orioles’ 13 hits to lead the way in Thursday’s laugher against the Blue Jays. Two of the center fielder’s hits came in a six-run third inning.

These dudes can fly! pic.twitter.com/b3jiwgQLdB

Baltimore first baseman Trey Mancini will miss his fourth straight game with right hand soreness. He was injured Monday when hit by a pitch.

The Rays lost Thursday night when the Yankees’ Anthony Rizzo hit a solo home run with one out in the bottom of the ninth inning to break a 1-1 tie.

Tampa Bay was limited to three hits, including a solo home run by Francisco Mejia.

Rays center fielder Kevin Kiermaier is questionable after sitting out Thursday with a sore left calf and Achilles. He was first bothered by the injury last week and left Wednesday’s game early.

The Rays have won four of six games from the Orioles this season, though they lost two of three in Baltimore last month. Tampa Bay has been led by Randy Arozarena, who is hitting .480 (12 for 25) with two home runs, and Kiermaier, who is 9 for 22 (.409) with two doubles and a homer.

The Rays have dominated the series since the start of the 2017 season with a 62-30 advantage.

While Baz struggled mightily in his season debut, he had a 2-0 record and 2.03 ERA for the Rays last season in his first three career MLB starts. Look for him to shake off the rust and pitch better this time.