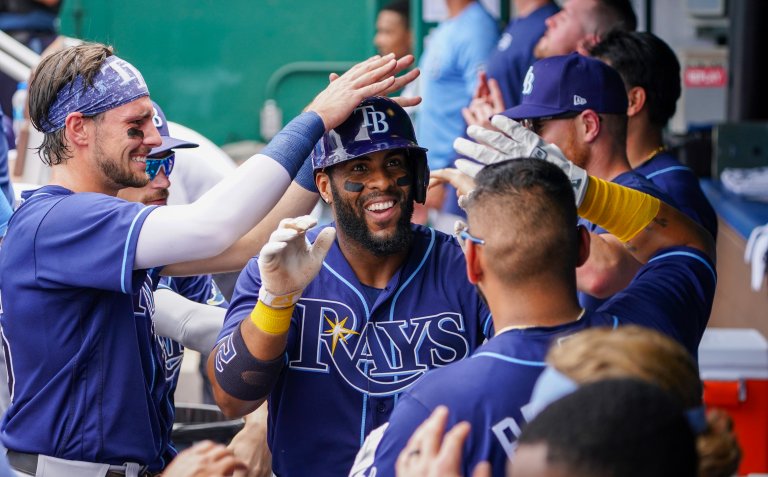 The Tampa Bay Rays and Baltimore Orioles face off at Camden Yards on Monday, July 25th
The Rays are in thick of the AL Wild Card standings, while the Orioles are surprisingly in the postseason mix as well
Read below for the Rays vs Orioles odds and betting preview

The Tampa Bay Rays (52-41) face the Baltimore Orioles (47-48) on Monday at Camden Yards. The opener of a four-game series has a scheduled first pitch of 7:05 pm ET. The Rays will send Corey Kluber to the mound, while the O’s counter with Austin Voth.

Odds as of July 24th at Caesars Sportsbook.

The 36-year-old Kluber – a two-time Cy Young Award winner — is enjoying his best season since 2018. That’s when the big right-hander went 20-7 with a 2.89 ERA for the Guardians, while logging his fifth straight 200-plus-inning campaign. The Rays are 10-8 in his starts this season, nine of which have been of the quality vintage.

He’s hurled six innings in each of his previous three outings, while sporting a 3-0 record and 3.00 ERA over that stretch. Kluber allowed eight hits, four earned runs and one walk while striking out three last Sunday in an eventual 7-5 victory over these Orioles.

Meantime, Voth — who the O’s picked up off waivers after he was released by the National last month — has been a pleasant surprise for an equally surprising Baltimore squad. The O’s have gone 4-1 in his 2022 starts, with his longest outing being a five inning turn on July 10th against the Angels. He allowed four hits, two earned runs and no walks while striking out six in what turned out to be a 9-5 win.

Austin Voth since being claimed by the Orioles:

Numbers are similar to what they were with the Nats this season, but the home run ball is way down. Surprisingly he’s getting hit harder.

The 30-year-old made a relief appearance against these same Rays last Saturday, tossing 2.1 scoreless innings and allowing only one hit and one walk while striking out a pair in a 6-4 O’s win.

The Rays enter Charm City after dropping two of three on the road to the Royals. Yandy Diaz was the hitting star for Tampa Bay in the three-game set. He capped a four-run fourth inning with his bases-loaded double in a 7-3 win on Friday and blasted a solo shot in the fourth — then hit another double — in Sunday’s 4-2 defeat.

The only thing hotter than the weather is Yandy Díaz pic.twitter.com/Fql0cDG2Tf

Randy Arozarena has been manager Kevin Cash’s best overall hitter, launching 12 homers to go along with 44 RBI and a .252 batting average.

Meantime, the Orioles lost two of three to the pace-setting Yankees over the weekend. Baltimore dropped a heartbreaking 7-6 decision on Friday, won 6-3 on Saturday, then got shut out 6-0 on Sunday. Cedric Mullins had a nice weekend against New York, going 5-for-11 at the plate and stole a base.

Cedric Mullins became the 20th player in Orioles history to have 60 or more stolen bases with the club.#Birdland

Five Baltimore players have hit double-digit homers, with Anthony Santander leading the way with 16. The outfielder also has a team-best 49 runs driven in to go along with a .241 batting average.

The Orioles currently have +25000 odds to win the Fall Classic, while the Rays are at +3200 in the World Series odds.

The Orioles have defied expectations so far this season, but with a somewhat rejuvenated Kluber on the bump for the Rays, I like the road team in this spot.

Baltimore has nice offensive balance, but I see Tampa getting to Voth and doing just enough to earn a win.