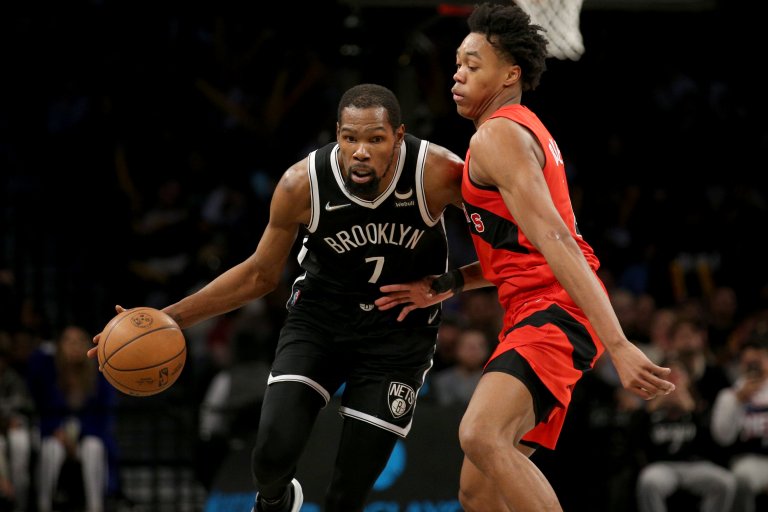 The Toronto Raptors odds to trade for Kevin Durant are rapidly shortening
Phoenix remains favorites to acquire the former MVP
Which team represents the best value bet at the moment?

The Toronto Raptors have moved into +250 odds to trade for Kevin Durant having been out at +3000 on June, 30th. Phoenix is still the betting favorite to land the Nets forward, but their price has slightly lengthened over the last few days.

It’s looking like it’s down to the Raps and Suns in the latest Durant next-team odds market. The remote possibility of staying at Brooklyn has moved out to +850, and a shock reunion with James Harden in Philadelphia is all the way at +1500, having been +800 last week.

Odds as of July 4 at DraftKings Sportsbook. Get this DraftKings promo code before betting on the NBA

The weekend brought a wave of Durant to Toronto rumors. Zach Lowe floated the Raptors as a Durant destination even before his trade request, and reporting from around the league has suggested it is a very real possibility. Masai Ujiri made a similarly big swing when he acquired Kawhi Leonard a few seasons ago, and the Raptors’ front office is believed to be in talks for Durant.

There is meaningful momentum behind the Raps right now, just as there was for Paolo Banchero to be selected first overall in last month’s draft. Old clips of Durant saying he wanted to play for the Raptors as a kid and praising the organization more recently have only added to the hype surrounding a potential trade.

Only a handful of teams make sense as a Durant trade destination. Toronto is one of them. The Raps have the assets (led by Scottie Barnes) and picks to give Brooklyn the haul they desire without gutting the roster. Toronto has tradeable contracts in OG Anunoby, Gary Trent Jr, Fred VanVleet, and Pascal Siakam. The main question for the Raps is whether they can get this done without giving up Barnes — the prospect of trading Barnes, even for an all-time great in Durant, is what divides opinion among Raptors fans.

Durant in Toronto Would Be Devastating

Toronto would likely be NBA Championship odds favorites if they landed Durant. They kept Chris Boucher and Thaddeus Young in free agency, while adding Otto Porter Jr for most of the midlevel exception. Durant fits in anywhere, but he is particularly complementary to this Raptors roster, providing shooting and scoring alongside the length and defense that Ujiri has already built.

In 2013, the Toronto Raptors were stuck in a stretch of five straight years without making the playoffs. Not many superstars gave them love down south. In 2013, Dan Patrick asked Kevin Durant who he wanted to play for when he was a kid. Here’s what KD said… pic.twitter.com/NajjTvksnD

The halfcourt offense was the Raps’ biggest weakness last season (they were 26th in points per play in the halfcourt). There are few better ways to address that than adding Durant. If it’s a package around Anunoby, the defense will not be quite what it was, but Durant remains a top-tier defender in his own right. If Barnes goes in the trade, Durant can compensate for the loss of playmaking.

It’s hard to know exactly how the Raptors would look because there’s such uncertainty over who would go the other way. The expectation, though, is that Siakam and VanVleet would remain. Both fit perfectly next to Durant, and Nick Nurse will likely still have Young, Porter, Boucher and Precious Achiuwa for necessary shooting and length around the two-time Finals MVP.

A thought I just had. Let’s say:

Kyrie wouldn’t be able to play road games in the Finals because of Canada’s vaccine mandate.

The size of Toronto’s roster could be particularly appealing for Durant after having to play in so many super small lineups with the Nets. Toronto is equipped to guard the East’s biggest stars — Giannis Antetokounmpo, Joel Embiid and Jayson Tatum — without Durant having to overly exert himself on that end.

We like Toronto at +250 to land Durant. There is precedent for this with the Leonard trade. The Raps are not a title contender as it stands, but this would immediately open their window for the remaining four years of his contract.

Having Durant under control for four seasons makes it a much more appealing option for a team like Toronto. The contract lines up with VanVleet and Siakam’s primes. Three or four legitimate shots at winning the title makes it a more reasonable proposition to give up Barnes.

There are complications with Phoenix trading for Durant if, as expected, Deandre Ayton is involved through sign-and-trade. Toronto’s path is much simpler, and they unquestionably have the assets to get it done.