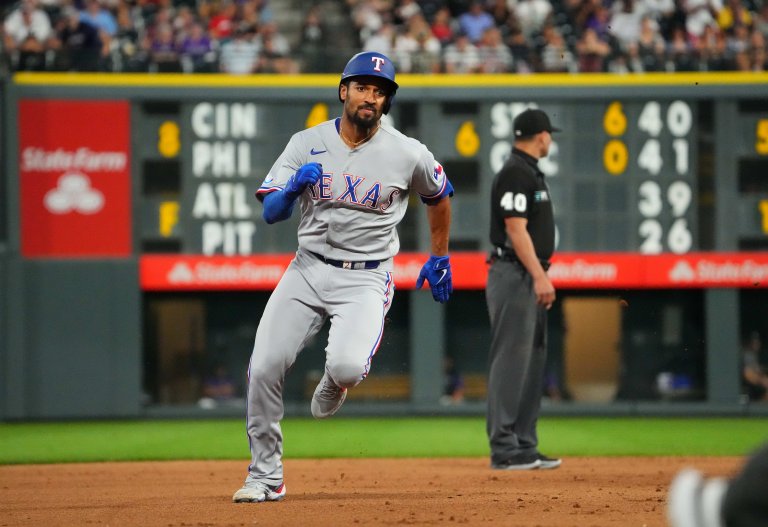 The Rangers and Rockies face off at Coors Field on Wednesday, August 24th
Texas is in third-place in the AL West but has underachieved in 2022, while Colorado has floundered since a promising April
Read below for the Rangers vs Rockies odds and betting picks

The Texas Rangers (56-67) face the Colorado Rockies (54-70) on Wednesday at Coors Field in the second matchup of a short two-game series between a pair of also-rans. First pitch is scheduled for 3:10 pm ET. The Rangers interim skipper Tony Beasley will send All-Star Martin Perez to the mound, while Bud Black’s group counters with Jose Urena.

The Rangers are favorites in this one.

Odds as of August 23rd at FanDuel Sportsbook.

The 31-year-old Perez has emerged as the ace of the Texas staff in 2022.  The Rangers have gone 16-8 in the lefty’s starts this season, 17 of which have been quality turns. Perez had a remarkable nine-game run between late April and early June where he was practically unhittable, compiling a 4-0 record with a 0.88 ERA over the stretch. The Venezuelan hasn’t been as dominant of late — but he’s turned in quality outings in five of his last six turns — going 2-2 with a 2.92 in that timeframe.

The Rangers have a .398 winning percentage in games started by anybody else other than Martín Pérez. That’s a 65 win pace for a 162 game season.

He went six innings against the Twins last Friday, allowing five hits, a pair of earned runs and three walks while striking out seven in a 2-1 loss.

Meantime, the 30-year-old Urena has started nine games for Colorado this season — with the team going 2-7 in those turns. He’s made 13 appearances overall, with the Rockies going 4-9. Despite his less-than-stellar statistics, Urena has actually been serviceable since joining the club in late May. Five of those nine starts have been quality ones.

Rousing round of applause and appreciation for #Rockies José Ureña by the Coors Field faithful. pic.twitter.com/FT9VdP8bPd

The Dominican native went 6.2 innings against the Giants last Friday, allowing only three hits, three earned runs and two walks while striking out three in a 7-4 victory.

Texas enters Wednesday’s matinee with a 15-18 record after the break. The franchise cleaned house last week, first sending manager Chris Woodward packing then relieving president of baseball operations Jon Daniels of his duties. Since taking over for Woodward, Beasley has a 5-4 record.

20th homer of the season for Marcus Semien! pic.twitter.com/kGzkaos0Wl

Marcus Semien and Nathaniel Lowe homered and drove in two runs apiece and Adolis García extended his hitting streak to 20 games for the Rangers in the series opener. But Texas failed to hold a pair of three-run leads and lost 7-6.

Meantime,  CJ Cron hit what proved to be the game-winner when he blasted a three-run homer in the seventh inning  of Tuesday’s victory. Elias Díaz also had a three-run big fly in the comeback win.

Charlie Blackmon was another offensive star for the home team. He finished with three hits and and drove in a run for the Rockies, who have won three of the last four after a five-game losing streak. This club has the bats to erase any deficit — and that was evident in the first game against the Rangers.

Both clubs face massive +500000 odds in the World Series odds.

Texas blew not one, but two big leads in the opener. With Perez getting the start on getaway day, I don’t see lightning striking twice.

Colorado has put together a nice little run over the last few games. But I like the visiting favorites in this spot.