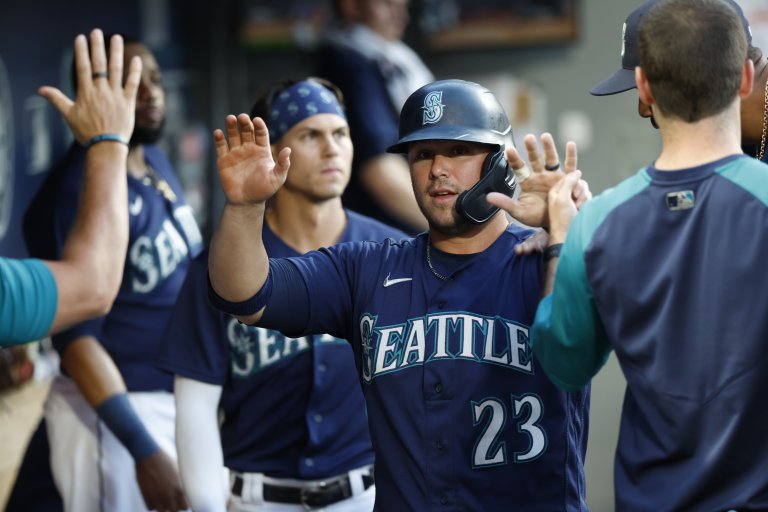 The Mariners are -155 home favorites over the Rangers on Tuesday night
Dane Dunning (1-6, 4.42) will pitch for Texas against rookie George Kirby (2-3, 3.78)
A look at the odds and matchup can be found below with a prediction

Back on the winning track, the Seattle Mariners host the Texas Rangers at 10:10pm ET Tuesday in the middle game of a three-game series at T-Mobile Stadium.

Odds as of July 25th at BetMGM.

The T-Mobile Park roof will likely be open with a gametime temperature of 87 degrees expected with a low 67, clear skies and wind at 5 mph from the northwest.

Dunning is expected to be reinstated from the injured list. He has been out since July 11 with a right ankle impingement.

that’s a $500 million double play to get Dane Dunning out of a bases-loaded jam. pic.twitter.com/0hM4Ntb36O

In his last outing, Dunning made it through just 2.1 innings against the Twins on July 10 in a no-decision at Minnesota. He was tagged for four runs on six hits with four walks and two strikeouts.

Against the Mariners, Dunning has a 1-1 career record and 3.94 ERA in three starts. His lost his lone outing at T-Mobile Park on April 20 when he allowed three runs in four innings.

Kirby is expected to be recalled from Triple-A Tacoma and make his first start since July 8 for the Mariners. The 24-year-old was sent to Tacoma to manage his workload and pitched only once for the Rainiers, allowing four runs in two innings July 16 against Oklahoma City.

In his last three starts for the Mariners, Kirby had an 0-1 record and 5.87 ERA. His American League Rookie of the Year odds are +6500.

Kirby has faced the Rangers once and gave up two runs in six innings in a no-decision June 5 on the road. He is 0-2 with a 4.58 ERA in seven starts at home this season and 2-3 with a 4.76 ERA in nine starts at night.

When Kirby starts, the Mariners have gone 7-5.

The Mariners’ Adam Frazier is 3-for-8 against Dunning with a double but rookie sensation Julio Rodriguez is hitless in five at-bats with three strikeouts.

Ty France went 3-for-3 with a home run and a hit by pitch to help the Mariners beat the Rangers on Monday night. Cal Raleigh added two hits for the winners.

Three-hit night for Ty, and the third went 416 feet ?? pic.twitter.com/gkqBGMMKbW

Rodriguez is expected to return for the Mariners after the center fielder sat out the last four games with a soreness in his left wrist. Left fielder Jesse Winker (sprained right ankle) is questionable after missing Monday night’s game.

Nathaniel Lowe homered and doubled for the Rangers.

The Mariners have won nine of 11 games from the Rangers this season, including three of four in Seattle. The Mariners hold a commanding 59-38 advantage in the series since 2017.

Both starting pitchers haven’t appeared in a major league game for two weeks. However, Kirby has big talent, is rested, and should be refreshed from his break.