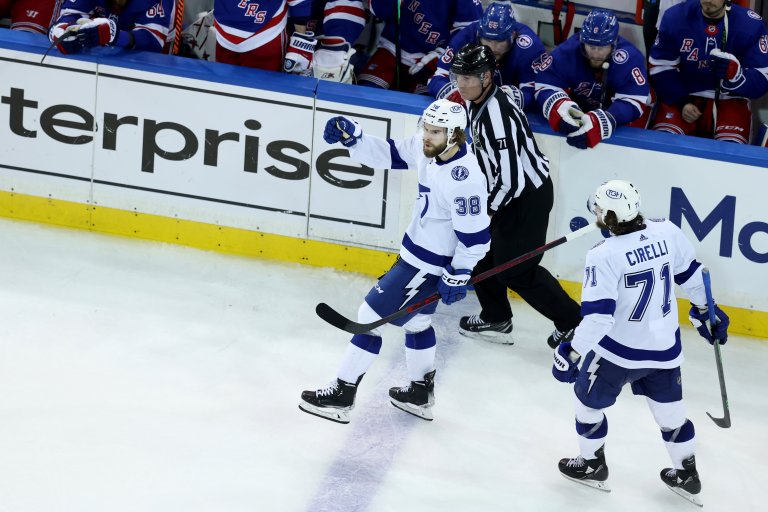 The Tampa Bay Lightning are one win away from advancing onto the Stanley Cup Final for the third consecutive season. The Lightning host the New York Rangers in Game 6 of the Eastern Conference Final on Saturday, June 11th (8:00 PM EST).

Tampa Bay is listed as -182 home favorites in the Game 6 Rangers vs Lightning odds. The total is set at 5.5 for a matchup that will be broadcast nationally by ESPN and CBC.

Let’s take a look at the Rangers vs Lightning odds for Game 6 and find the NHL best bet.

Odds as of June 10h at Barstool Sportsbook.

The Lightning are listed on the puckline at +150 odds, while the Rangers are -182 in the NHL odds to keep the game within two goals.

After taking a 3-2 series lead, the Lightning are now heavy favorites in the Rangers vs Lightning series odds.

The Lightning have taken a 3-2 series lead in the Eastern Conference Final following a 3-2 victory Thursday. Tampa Bay forward Ondrej Palat scored the game-winning goal late in the third period to push the Rangers to the brink of elimination.

Tampa Bay has now won three straight games vs New York after falling behind 0-2 in the series. The Lightning defense has allowed just four goals in the past three games after surrendering nine in the first two.

The advanced metrics confirm that Tampa Bay has taken control of the series. The Lightning have an impressive 60.3 xGF% at five-on-five in the series, while the Rangers have a 36.7 xGF%. There were only three power plays assessed in Game 5.

Palat continues to be one of the biggest stories of the Eastern Conference Final. The 31-year-old forward has scored in four of the games in the series, including two game-winners. Goalie Andrei Vasilevskiy, meanwhile, has allowed a single goal in back-to-back starts.

There are some injuries to note before making a Game 6 wager on Rangers vs Lightning. Tampa Bay forward Brayden Point continues to be sidelined by a leg injury and is listed as “questionable” for Game 6.  Point skated at Tampa Bay’s practice Thursday.

With Tampa Bay nursing a lead in the series, it’s more likely than not they’ll air on the side of caution with Point. Considering they’ve won three straight games without the speedy forward in the lineup, they likely won’t play him Saturday unless he’s truly healthy.

On the Rangers side, forward Ryan Strome made his return to the lineup Thursday after missing the previous game with a lower-body injury. Strome had two shots on goal in 16:52 of ice time and appears good to go for Saturday’s Game 6.

The New York vs Tampa Bay betting trends point towards the Rangers potentially forcing a Game 7. Gerard Gallant’s team is 5-0 when facing elimination in these playoffs and has trailed 3-2 in every series thus far.

While the Rangers are showing resilience, the odds aren’t in their favor. Teams that win Game 5 in a tied playoff series go on to win the series 78.5 percent of the time. It’s no surprise New York’s Stanley Cup odds have faded to +1600.

The Rangers vs Lightning head-to-head trends also favor Tampa Bay. The Bolts have won five of the past seven meetings at Amalie Arena, and the home team has won four of the last five meetings overall.

The goalie showdown between Andrei Vasilevskiy and Igor Shesterkin is leading to an “under” trend in this series. Thursday’s game marked the fourth consecutive meeting in which the game has gone under the total.

The Rangers vs Lightning odds have the right team favored for Game 6. The Bolts have all the momentum in the series and can punch their ticket to the Stanley Cup Final with a victory on home ice.

Tampa Bay has only lost once at home in these playoffs and have outscored the Rangers 7-3 in the two previous games played at Amalie Arena. Furthermore, Shesterkin only owns a .904 save percentage on the road compared to a .946 SV% at home.

Tampa Bay has been the better team in the series and holds a huge edge in Game 6 with home-ice advantage. Their playoff experience is showing against a young and inexperienced Rangers squad.

Look for Vasilevskiy to shut the door Saturday to help send the Bolts to another Cup Final. Bet the Tampa Bay Moneyline (-182) at Barstool Sportsbook.