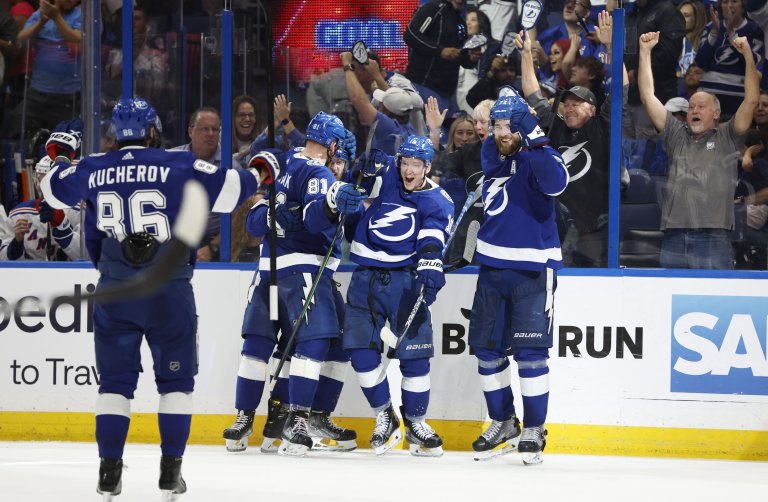 The New York Rangers take on the Tampa Bay Lightning in Game 4 on Tuesday, June 7th
For the fourth consecutive game, the Lightning are favorites in the NHL odds
Read below for the Game 4 Rangers vs Lightning odds, picks, and prediction

Momentum is very open to perception, but after scoring a game-winning goal in the last minute of regulation to avoid a 3-0 series deficit, you have to think the Lightning have a mental edge on the Rangers.

Game 4 of the Eastern Conference is on Tuesday, June 7th, at Amalie Arena with the faceoff scheduled for 8:00 pm ET.

The game will be broadcast on ESPN and once again, the Lightning are considerably strong -175 moneyline favorites in the Rangers vs Lightning NHL odds.

Odds as of June 6th at Barstool Sportsbook.

Home ice has been a distinct advantage in this series so far with the local side taking all three contests and the Rangers leading the best-of-7 series 2-1. Let’s take a look at the Rangers vs Lightning Tuesday NHL odds and give you our best NHL bet and prediction for a critical Game 4

The over/under total for this game once again sits at 5.5 goals. As -175 moneyline favorites, the Bolts have an implied win probability of 63.64%, while the Rangers at +145 on the moneyline have a probability of 40.82% to take Game 4.

Staring a 2-1 deficit in the eye heading into the 3rd period of Game 3, the Lightning showed their championship mettle, coming from behind to scored two in the frame and jump right back into the series.

Steven Stamkos tied it up early in the period with a vintage Stammer one-timer on the power play, and Ondrej Palat basically won it at the death, buryg the game-winner on a beautiful no look feed from Nikita Kucherov with just 42 seconds left in regulation.

With the win, Tampa’s 2022 Stanley Cup Odds shortened and they’re now on par with the Rangers at +400 at Barstool Sportsbook to lift Lord Stanley’s mug for a third year in a row.

We all know Brayden Point remains unlikely to return for any portion of this series, but it’s the Rangers who appear to be facing new injuries. Ryan Strome exited Game 3 with a lower body injury and Gerard Gallant failed to provide much of an update on his status post game.

Luckily for the Rangers, top line center Mika Zibanejad continues to play at a Conn Smythe worthy level and has absolutely owned the Lightning this season. He has goals in every game this series and seven of his last eight going back to the Carolina series.

Zibanejad has seven goals and two assists in six contests against Tampa including the regular season. If you’re looking for a good player prop bet to make in Game 4, taking him to score on Andrei Vasilevskiy might be the best pick.

After tonight’s game, Mika Zibanejad is only 6 points behind Mark Messier for 2nd most points in a single #NYR post-season.

Fox with 23 points right behind him. pic.twitter.com/KM8CR5DzUu

One other notable trend to follow is the success of both these teams on home ice so far this postseason. With their Game 3 win, the Lightning improve to 5-1 at Amalie Arena this postseason, while the Rangers road record dropped to an abysmal 2-6.

Although they emerged victorious, Vasilevskiy was once again outplayed by his Russian counterpart at the other end, Igor Shesterkin. The Rangers Hart Trophy odds finalist was under siege and kept them in it until the very end stopping 49 of 52 shots.

The Lightning’s Game 3 victory was the first time they beat the Rangers in six tries this season.

While the two-time defending cup champs are back in the series, it was a very narrow victory despite the big difference in shots. Shesterkin almost stole one for the Rangers in Game 3. Tampa are once again strong chalk in the Tuesday NHL odds at -175 on the moneyline.

That’s also the 7th time in the last eight games that the Lightning have gone under the projected goals total. Special teams were a key factor in Game 3 with four of the five goals being scored via the power play.

The Rangers have proved themselves to be a formidable opponent and I’m a bit surprised they’re not getting more respect in the Rangers vs Lightning Game 4 odds. Still, betting trends and momentum are on Tampa’s side for Game 4, so our pick and best NHL bet is the Lightning on the moneyline at Barstool Sportsbook.