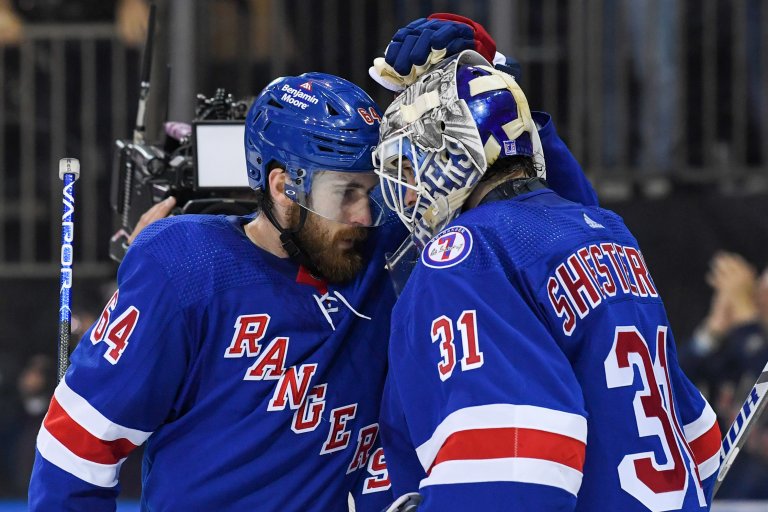 The Tampa Bay Lightning host the New York Rangers for Game 3 on Sunday, June 5th
Despite being down 2-0 in the series, Tampa are betting favorites for the 3rd game in a row
Read below for the Rangers vs Lightning Game 3 odds, picks, and prediction

After squeaking out a 3-2 victory in Game 2, the Rangers can put the two-time defending Stanley Cup champions on the brink of elimination with a victory in Game 3. The last time the Lightning found themselves down 2-0 in a series, they were swept by the Columbus Blue Jackets in the first round of the 2019 postseason.

It’s basically a must win for Tampa as only four teams have come back from an 0-3 best-of-seven series deficit in NHL history. Once again, the Lightning are favorites at -175 on the moneyline despite the fact they have been outplayed in the series. Oddsmakers are counting on their championship pedigree to rise from the ashes.

Odds as of June 4th at Barstool Sportsbook.

Game 3 is a matinee affair at Amalie Arena in Tampa with the faceoff scheduled for 3:00 pm ET on Sunday, June 5th. ESPN will provide the coverage for the afternoon broadcast. Let’s take a look at the Rangers vs Lightning Sunday NHL odds and give you our best bet and prediction.

Heading back home, it’s not to surprising that the Lightning are once again the chalk, but the odds are juiced more heavily in their favor than I would’ve expected. At -175, the Bolts have an implied win probability of 63.64%, while the Rangers at +145 on the moneyline have a probability of 40.82% to take Game 3.

For the third time in a row, the Rangers proved the oddsmakers wrong and won as underdogs in Game 2 against Tampa. They improved their playoff home record in 2022 to 8-1, so the question is, will they continue their success on the road?

The Blueshirts are just 2-5 away from the jungle that is Madison Square Garden in this postseason, although their last road game was a convincing 6-2 defeat of the Carolina Hurricanes in Game 7 of the 2nd round.

Out of the superstar defensemen in this series, Victor Hedman is the one who is a finalist in the Norris Trophy odds, but last season’s winner of the award, Adam Fox had been the best blueliner in the first two games. His shiftiness and creativity led to the go-ahead 2-1 goal for the Rangers in Game 2.

Key save by Shesterkin against Stamkos pic.twitter.com/5lwnDob5Ii

Meanwhile, Igor Shesterkin continues to win the goaltending battle and show why he is the overwhelming favorite in the Vezina Trophy odds. Among his best stops in Game 2 was a fully stretched out toe save on Lightning sniper Steve Stamkos. He also stoned the Tampa captain in the final minute of the game to preserve the victory.

This is very unfamiliar territory for the Lightning. For the first time since 2019 they failed to win after a playoff loss, a streak that lasted an incredible 17 games. If Tampa fans are looking for help from the infirmary in the image of Brayden Point, the likelihood of that happening appears very low.

The Lightning are down 2-0 to the Rangers. It’s their first back-to-back losses in the playoffs since 2019.

They need a spark. They desperately need Brayden Point.

The problem is, his return does not appear imminent.

The Rangers are making Andrei Vasilevskiy look human after his superhero performance against the Panthers in the 2nd round. Vasilevskiy has allowed three plus goals in each of the first two games against the Rangers, after allowing just three total in the whole series against Florida.

Tampa will need their superstar goalie to perform if they’re going to make this a competitive series. They can take solace in the fact that they’ve only lost one game on home ice so far this postseason and won’t have to deal with the wild Rangers fan base for the next couple contests.

With a 2-0 series deficit staring them in the face, the Lightning’s 2022 Stanley Cup Odds have obviously faded, with the Rangers the more likely candidate to advance in the NHL Playoff Bracket.

One other surprising stat to make note of in matchups between these two teams is that the Rangers are now a perfect 5-0 against the Lightning this season. Sometimes a team just has your number, and you have to wonder whether that’s starting to get in the heads of the Tampa players.

THEY’VE RAN INTO AN NY TEAM WHO’S JUST, BETTER THAN THEM.

Tampa are a resolute squad and Game 2 was a difficult loss to swallow. Most are expecting them to bounce back and that’s why they’re strong favorites in the Rangers vs Lightning Sunday NHL odds.

It’s difficult to see them losing three in a row, although the Rangers do appear to have their number this year. One thing we should definitely expect is Vasilevskiy to give his best performance of the series in Game 3. He didn’t play poorly in Game 2, but can definitely steal a game like he did to seal the series against the Panthers.

The over/under total sites at 5.5 once again, and the Lightning have gone under the betting line total in six of their past 7 games. There’s been more goals than expected so far this series, but there’s a good chance that changes in Game 3, so pick the under with betting odds of -121 at Barstool Sportsbook.