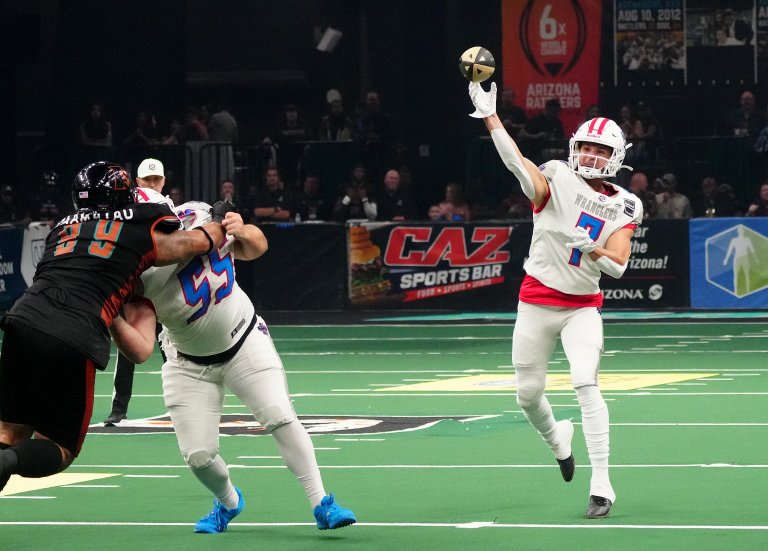 July 30, 2022; Phoenix, Arizona; USA; Wranglers quarterback Kaleb Barker (7) throws a pass against the Rattlers during a playoff game at the Footprint Center.

The Northern Arizona Wranglers are 7-point favorites over the Quad City Steamwheelers in the IFL National Championship Game on Saturday, August 13 in Henderson, Nevada
Quad City’s last five games were all decided by one score
Northern Arizona is the IFL’s #1 defensive unit

As the Arizona Wranglers and Quad City Steamwheelers get ready to contest the IFL National Championship Game this weekend, there’s an old football axiom that is still appearing to be applicable.

Defense wins championships. Even when it comes to the wild and woolly world of indoor football.

All season long, the Wranglers have rated among the leading defenses in the IFL. During postseason play, the Steamwheelers are holding the opposition to an average of 39.5 points per game.

Still, that’s eight points per game higher than the Wranglers are allowing. Perhaps that explains why Northern Arizona is being set as a 7-point favorite in the title tilt.

The IFL National Championship Game is set for a 7:05 pm ET start at the Dollar Loan Center in Henderson, Nevada. The game will be broadcast nationwide on YurView from Cox Communications. It’s also being broadcast on the IFL YouTube channel.

At a Moneyline of -200, the Wranglers are given an implied probability of victory of 66.67%. A win by Northern Arizona in the IFL National Championship Game would produce a payout $15 on a $10 wager.

Both the Wranglers and Steamwheelers won their IFL semifinal games as 7-point underdogs. Quad City is 2-0 both straight up and against the spread as a betting underdog during the postseason.

Going back to the regular season, Quad City is 5-1 SU over the past six games. The Steamwheelers are making close count. Each of their last five games were decided by one score.

The comeback story of E.J. Hilliard is so inspiring! E.J. wins Offensive Player of the Year in the IFL after getting picked up by the Steamwheelers 6 weeks into this season. Before that, the QB hadn’t played on a team since playing for the Steamwheelers in 2019. @EJHilliard1 pic.twitter.com/CwF3QcXPuy

The double threat that is Steamwheelers quarterback E.J. Hilliard won the IFL’s Offensive Player of the Year award. Picked up six weeks into the season, Hillard only played 12 regular-season games. Completing 59.1 percent of his passes for 1,687 yards and 31 touchdowns, Hilliard was garnering a quarterback rating of 157.4. On the ground, he rushed for 758 yards and 28 touchdowns.

Hilliard ranks second in the IFL in rushing. He’s averaging 50.9 yards per game. His 12.0 points per game scoring average also rates #2 in the league.

Wranglers Rounding Them Up

The defense has been setting the tone for Northern Arizona all season long, and that’s continued to be the case in the IFL postseason. The Wranglers are allowing just 166.4 yards per game. That’s the stingiest in the IFL.

Rookie defensive lineman JaQuan Artis was named the IFL Defensive Player of the Year. He was also named to the All-IFL First Team and All-Rookie Team. Artis was also selected as the Defensive Rookie of the Year.

Artis leads the IFL with 9.5 sacks and is second with 17.5 tackles for loss. Dar Hungerford is tied for third in the IFL with 6.5 sacks. Ki Northrington has forced a league-high four fumbles, one ahead of teammates Artis and Tevin Homer.

The theory is that a great defense will stymie a superior offense. That’s what the Wranglers did in the Western Conference final, edging the Arizona Rattlers 52-51. Averaging 52.8 PPG, the Rattlers are the IFL’s #1 scoring offense.

This game will come down to Northern Arizona’s ability to contain the elusive Hillard. These two teams didn’t meet in regular-season play, so there’s no history to draw upon in that regard.

Including playoffs, the Wranglers are 14-4 this season. However, the decision in each of Quad City’s last five games has come by seven points or fewer. Take the Steamwheelers to cover the spread.