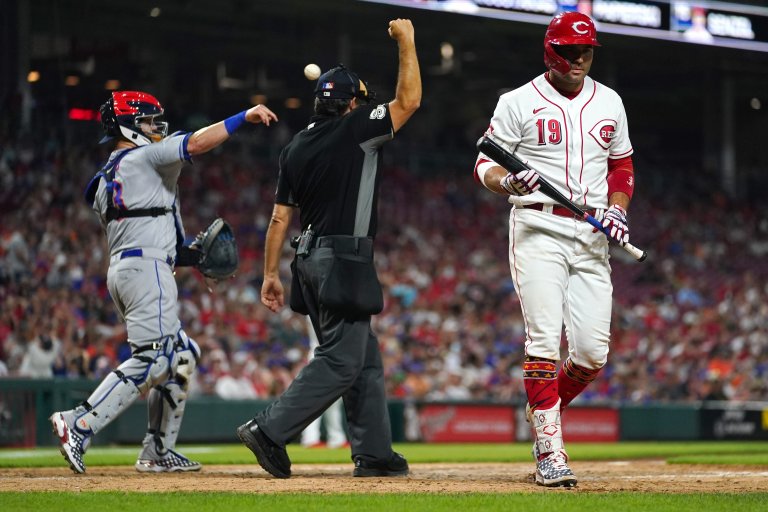 Cincinnati Reds first baseman Joey Votto (19) walks back to the dugout after striking out during the eighth inning of a baseball game against the New York Mets, Monday, July 4, 2022, at Great American Ball Park in Cincinnati.

The Pirates and Reds meet on Thursday in a day doubleheader
It’s Roansy Contreras vs Mike Minor on the mound in the first game
Read on for the Pirates vs Reds odds, preview, and picks

Roansy Contreras gets the ball here for the Bucs, while veteran left-hander Mike Minor takes the hill for the Reds.

Odds as of July 6th at Caesars Sportsbook.

The Pittsburgh vs Cincinnati odds are a pick’em, while the Pirates have won two in a row versus Cincinnati.

It’s been a respectable year for Contreras, who just made his MLB debut last season.  He still qualifies as a rookie and is just outside the top-ten favorites in the NL Rookie of the Year odds. The 22-year-old is 2-2 with a 4.09 ERA, striking out 43 in 44 innings of work. However, his command is inconsistent at times, giving up 21 free passes.

After a few quality starts, Contreras was absolutely lit up last time out, giving up seven earned and three homers in 1.2 frames against the Brewers. That’s the most runs he’s allowed in a single outing in 2022. It can only get better from hereon. He’s never faced the Reds, which means this is brand new territory for the right-hander.

Minor is in the midst of an atrocious campaign for the Reds. The 34-year-old owns a 6.82 ERA in six starts while posting a 1-5 record. In fact, his ERA has been over five in three straight seasons now. However, the southpaw did pitch relatively well in his most recent start against his former team, the Braves.

Minor tossed six innings, surrendering two runs and just six hits. He didn’t walk a single batter, either. If there is one thing you can rely on when it comes to Minor it’s him pounding the strike zone. Whether he gets hit around or not? Well, it’s happening more often than not at the moment. Minor has an ERA over five vs. Pittsburgh as well in five career appearances.

Pittsburgh is still 14 games below .500 and barely on track for their MLB Win Total, but they’re trending in the right direction as of late. Prior to Wednesday’s game against the Yankees, the Bucs won four of their last six, even handing the Bronx Bombers a loss on Tuesday. The Pirates split a four-game set with a solid Brewers team before hosting NY, too.

Ben Gamel is back! pic.twitter.com/NRsFQ3HJal

Although Minor has pitched against Pittsburgh numerous times before, this current lineup isn’t too familiar with him. Only four hitters in the lineup have history versus the left-hander.

Don’t get me wrong, the Reds’ offense is nothing to write home about. They’re in the bottom half of the bigs in runs, hits, average, and slugging, among others. However, it’s their pitching staff that is the real problem. Luis Castillo, who is actually expected to be moved at the trade deadline, owns an ERA of 3.08. Every other starter is well over four.

The hope is Minor can build off his last outing and give Cincy some longevity here. No one in this Reds lineup has ever faced Contreras either.

Contreras owns an ERA of 2.06 in day games and the Reds frankly don’t know what to expect here from a guy they’ve never stepped in the box against. I expect him to bounce back and help Pittsburgh take this one.