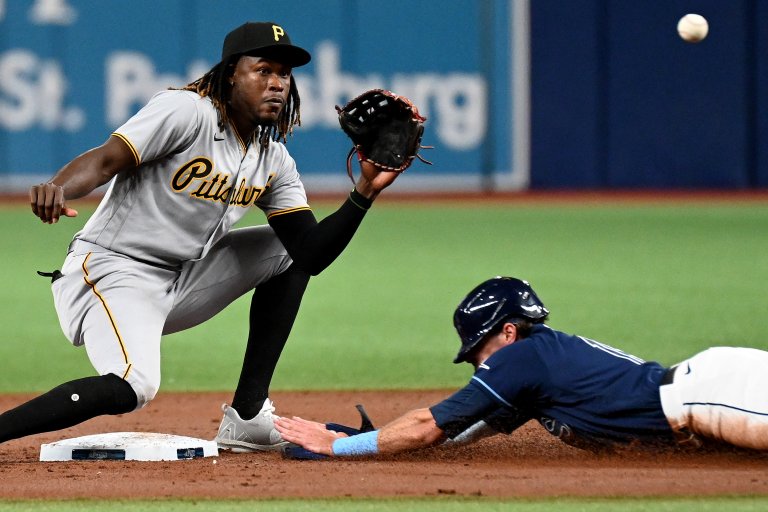 The Tampa Bay Rays are in a tailspin. Entering the weekend they’d lost nine of their past 12 games, while falling all the way down to fourth place in the AL East.

As a result, a date with the Pittsburgh Pirates couldn’t come soon enough. The Pirates began Friday with the fourth-worst run differential in baseball, 110 runs worse than the Rays.

The two teams will play the second game of a three-game set on Saturday afternoon, and oddsmakers appear quite bullish on Tampa Bay.

The Rays opened up as -170 moneyline favorites, in a contest that features a total of 7.5. First pitch is scheduled for 1:10 pm ET inside Tropicana Field in St. Petersburg, Florida.

Tampa Bay’s struggles have caused their World Series odds to crater to +3000. They’ll turn to Corey Kluber on Saturday, who’s been one of the few bright spots recently.

Kluber has allowed two runs or less in six of his past seven starts, and hasn’t yielded more than three runs in an outing in a month and a half. Last time out, he coughed up just four hits over 6 innings to Baltimore, while the start prior he didn’t allow an earned run in 6 innings versus the Yankees.

He’s never faced a single batter on the Pirates roster, but has pitched better at home than on the road this season. He’s 2-1 with a 3.03 ERA at Tropicana Field, compared to 1-3 with a 3.86 ERA as a visitor.

Pittsburgh, a 500-1 long shot in the MLB divisional odds, will give the ball to JT Brubaker. The 28-year-old is 7-23 in 47 career starts but still gets work regardless. Truth be told, he’s actually pitched much better than his record suggests.

JT Brubaker in his last 12 starts:

Brubaker is coming off 6 innings of shut-out ball against the Cubs, and has allowed three runs or less in five of his past six starts, and in 10 of his last 12 outings.

This will be his first career start against Tampa Bay, with Harold Ramirez being the only current Rays’ hitter he’s ever faced.

Brubaker is set up for success on Saturday as the Tampa Bay bats are in a funk. The Rays entered the weekend having scored three runs or less in six of nine games, and rank 25th or worse in batting average, slugging and OPS.

They’re batting just .218 with a .347 slugging percentage and .652 OPS over the past month. If you extrapolate those numbers over a full season, they’d be one of the worst hitting teams in baseball. To make matters worse, four regulars are currently on the injured list, so nearly half of the hitters Brubaker will face are backups.

One bright spot for the Rays has been the bat of Isaac Paredes. The 23-year-old has hit 9 home runs in just 90 at-bats this season, including four in two games against the Yankees earlier this week.

While we’re at it, can we interest you in ANOTHER Isaac Paredes homerun? pic.twitter.com/vCch3OVxFJ

The Pirates lineup on the other hand, has been ice cold all season. Pittsburgh ranks bottom-three in batting average, slugging and OPS, are hitting just .206 over the past two weeks. During that stretch, they’ve scored two or fewer runs on six occasions, and they average just 3.2 runs per game on the road this season.

Offense won’t be easy to come by for the Pirates given Kluber’s form and the ballpark where they’re playing. By the numbers, Tropicana Field is baseball’s third most difficult venue for hitters, ahead of only Citi Field in New York and the Oakland Coliseum.

Not surprisingly, unders have been a popular bet for Rays’ home games. The under is 22-15-1 at the Trop this season, and I like Saturday’s contest to be low scoring as well.