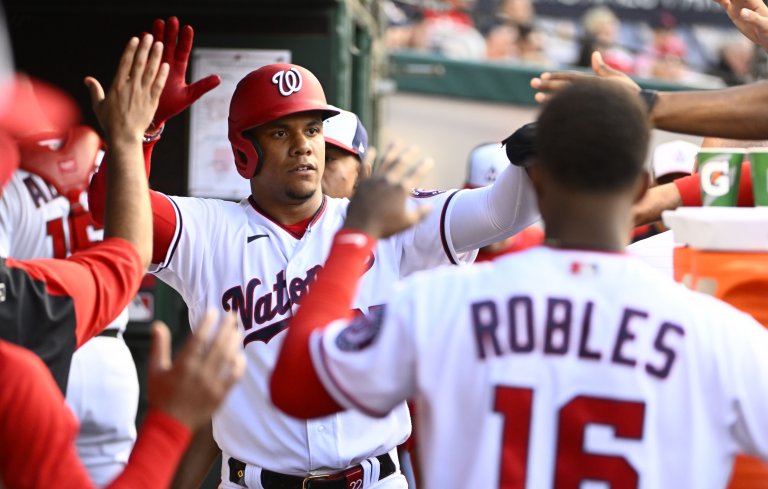 Thanks goodness for sports betting. Without it, we can be pretty sure there wouldn’t be much interest in the Pirates and Nationals matinee on Wednesday. Both teams own bottom-four records in the National League, and boast the two worst run differentials in the NL. But, even a meaningless MLB tilt in late June can feel like the biggest game in town when you have a little action riding on it.

Pittsburgh is in the midst of yet another funk, and oddsmakers aren’t expecting that to change in the series finale against Washington.

The Nationals opened up as a -135 moneyline favorite, in a contest that features a total of 9. First pitch is scheduled for 1:05 pm ET at Nationals Park in Washington, DC, with sunshine and 85-degree temperatures in the forecast.

The Nationals, along with the Pirates, enter play on Wednesday tied for the longest price in the World Series odds. Washington has actually been playing better recently, more on that later, and will turn to Paolo Espino to keep the momentum going.

The 35-year-old toiled in the minors for over a decade before finally earning a shot to start on a regular basis last season. He put up a respectable 5-5 record with a 4.27 ERA on a bad Nats team, but this year he’s been a revelation.

Meanwhile, Paolo Espino has tossed 4 scoreless innings and now owns a 2.06 ERA for the season.

Espino started the season in the bullpen before being thrust into a starting role earlier this month. He’s made three starts total yielding just four earned runs over 17 innings. He’s allowed only 10 earned runs in 40 total innings this year, posting a 30-9 strikeout-to-walk rate and a .234 opponent batting average.

Espino has faced the Pirates just once this season, holding them scoreless through an inning of work. We shouldn’t expect a length outing from the right-hander, but he’s a strong bet to hold the underwhelming Pittsburgh bats at bay for four or five innings.

The Pirates will counter with Mitch Keller. The club’s number four starter got off to a terrible start to the season, but has performed much better over the past month and a half. During that stretch he’s allowed three runs or less in seven straight appearances, and owns a tidy 2.82 ERA in the month of June.

Keller doesn’t have a ton of history with this version of the Nats lineup, but he’s yet to yield an extra-base hit in 24 at-bats versus current Washington batters.

Entering play on Tuesday, the Nationals had won five of seven. That’s the best stretch of ball they’ve had all season, but it hasn’t been the result of a power surge. The team is averaging only 3.57 runs per game over that stretch, while batting .239.

For the season, Washington ranks below league average in both slugging and OPS, and bottom-six in runs per game and batting average with runners in scoring position. Needless to say, Keller will have an excellent chance to continue his solid run.

As for the Pirates bats, it’s bleak. Entering Tuesday, the club had scored an NL low 265 runs. They’re on pace to finish five wins fewer than their projection in the MLB win totals, and have scored four runs or less in 14 of their past 22 outings. But at least they have Oneil Cruz, who is quickly turning into one of the most exciting rookies in baseball.

3 innings into his 2022 debut, @Pirates’ Oneil Cruz has registered:

Cruz is batting just .250 since joining the club earlier in this month, but even that’s much better than Pittsburgh’s recent numbers.

They’re batting a measly .205 over the past two weeks, and rank last in the NL in runs per game, OBP, slugging and OPS. On paper, they look like the last team that could give Espino problems.

Not surprisingly given their poor offensive numbers, is the fact that Pittsburgh ranks bottom-two in scoring over the first 5 innings. They average only 2.10 runs over that time frame per game, while Washington isn’t much better at 2.45.

The Pittsburgh Pirates have now had 16 consecutive losing months. The last time they finished a full month* with a winning record was May 2019 when they went 15-14. (*note they were 2-1 in October 2021)

With both Espino and Keller showing excellent form, this game profiles as a low scoring contest especially in the early going. I’m betting on both teams to struggle early on, as they have in each of the first two games of the series where they’ve combined to score only three runs total in the first 5 innings.