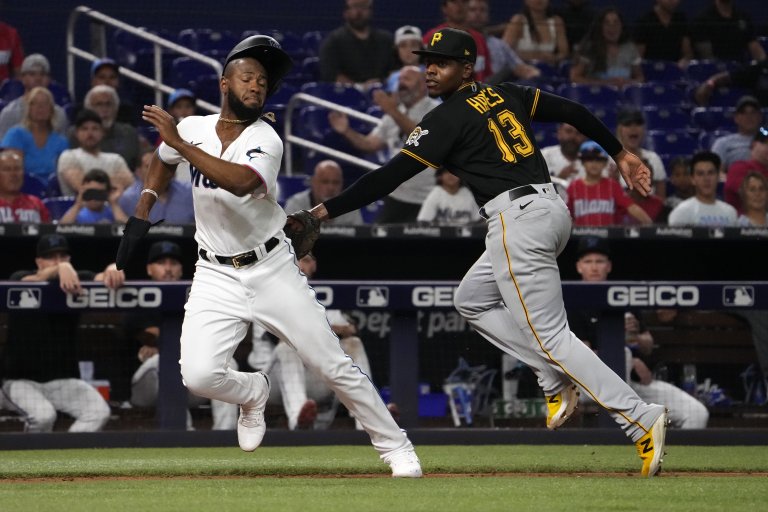 The Pirates visit the Marlins on Thursday afternoon
It’s Zach Thompson vs Braxton Garrett on the mound
Read on for the Pirates vs Marlins odds, preview, and picks

The surging Pittsburgh Pirates (38-51, 18-28 away) will be looking to continue their impressive play as they face the Miami Marlins (42-45, 21-19 home) on Thursday afternoon. The first pitch is set for 12:10 PM ET at loanDepot park in South Beach.

The Bucs will hand the ball to big righty Zach Thompson here as he looks to build off a streak of very solid outings. As for the Marlins, they counter with southpaw Braxton Garrett.

Miami is a -160 favorite for Thursday’s contest.

The numbers don’t look great for Thompson. He’s just 3-6 with a 4.38 ERA in 14 starts this season. However, the 28-year-old is trending in the right direction. He’s allowed just two runs in each of his last four outings and although the most innings he went was five, Thompson is certainly pitching a lot better.

Last time out, the right-hander tossed 4.2 frames against the Brewers, also surrendering six hits. If it wasn’t for the three walks, Thompson probably would’ve lasted longer. He has given up 27 free passes in 63.2 innings and that’s one of the reasons he doesn’t typically pitch too deep into ballgames. Thompson has never faced his former team.

Garrett made his big league debut in 2020 but he’s only been with the Marlins since the start of June when he was called up. Since then, the lefty has gone 1-3 with a 4.33 ERA in seven starts, striking out 29 in 35 innings while allowing just eight walks. Certainly respectable numbers.

On July 9th, Garrett came up against a solid Mets offense, throwing 5.2 innings of three-run baseball, also giving up two home runs. Only two of his outings have been at home, but he’s struggled in both, posting an ERA well over five. The 24-year-old has never faced the Pirates.

Pittsburgh has been playing extremely well lately and had won four in a row before losing on Wednesday. The Pirates scored two runs in the top of the 10th thanks to an RBI groundout from Daniel Vogelbach and a one-run single from Ke’Bryan Hayes. Michael Chavis ultimately tied the game at two in the top of the ninth with a clutch double, too.

However, the Bucs couldn’t hold onto their 4-2 lead in the bottom of the 10th as closer David Bednar gave up three runs. Nevertheless, Pittsburgh can still take three out of four in this series if they win the finale here. Knowing the way Thompson has been pitching, the Pirates should be feeling confident.

Wednesday’s victory was the definition of gritty. After getting shutout through the first seven innings, the Marlins scored two runs in the bottom of the eighth. Pittsburgh responded which sent this game to extras. Honestly, after going down by a pair of runs heading into the bottom of the 10th though, there wasn’t much hope left.

But, Jon Berti and Jesus Aguilar came through in a big way with hits. The latter also scored the winning run on a wild pitch from Bednak. In the process, Miami ended a two-game losing skid and have the opportunity to salvage a series split in the rubber match.

I really like Thompson’s form right now. He also tends to pitch slightly better during the day. Expect him to keep his ex-team at bay while the Bucs’ bats will do their fair share of damage. Take the underdog.