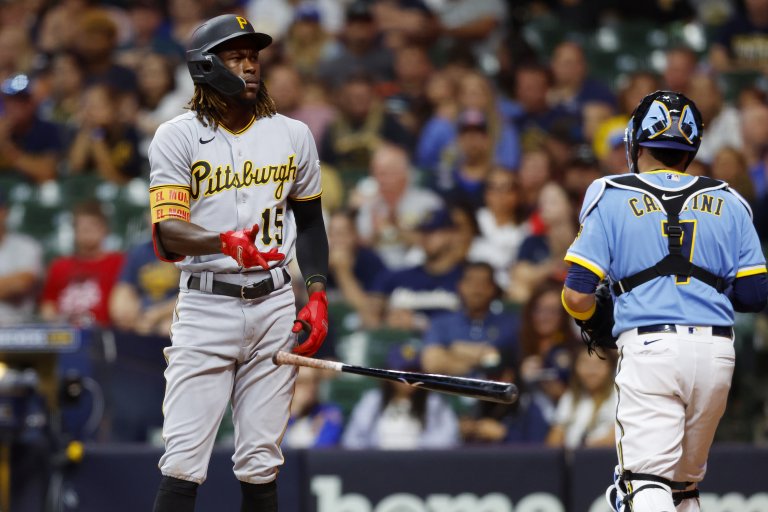 The Pirates and Marlins begin a four-game series on Monday evening
Miami is a -160 favorite here
Read on for the Pirates vs Marlins odds, lines, analysis, and betting prediction

On the mound, it will be Mitch Keller getting the ball for the Bucs, while the Fish counter with Trevor Rogers.

Odds as of July 10th at Caesars.

Although Miami is a clear -160 favorite here, the Pirates have won six of the last eight meetings.

Keller is struggling immensely this season, posting a 5.21 ERA and 2-6 record. He’s also walked 32 batters in 76 innings while striking out fewer than one batter per frame. The righty is really getting hit around lately too, surrendering nine earned runs across his previous two outings.

Mitch Keller has thrown 25 sinkers and only 5 four-seam fastballs (according to baseball savant). He threw 1 to Carpenter, 1 to Gleyber and then 3 in a row to Gallo. pic.twitter.com/8vXRPNjBLh

Last time out, Keller came up against an electric Yankees offense. Although he did pitch six innings, the 26-year-old gave up 10 hits and four runs. They also took him deep twice. In two career appearances vs. Miami, Keller has a 4.91 ERA.

Rogers isn’t doing any better than Keller this season. The lefty owns an ERA well over five in 16 starts while compiling a 4-7 record. However, his last outing was certainly respectable, tossing 4.2 frames and giving up three earned runs. He did take the loss, but he got a lack of offensive support from his lineup.

The 24-year-old is yet to face the Pirates in 22′, but in his lone career appearance against them, he threw six innings of two-run baseball.

Pittsburgh is 14 games below .500, but they’re in a bit of a rhythm right now. The Bucs just took two out of three from a very good Milwaukee Brewers team, beating them 8-6 on Sunday.

The home run played a huge part in the victory, with rookie sensation Oneil Cruz hitting a game-tying bomb in the sixth inning before Daniel Vogelbach put Pittsburgh ahead for good with a three-run shot of his own. Jose Quintana also gave the Pirates 4.1 innings where he allowed four runs.

Miami is currently 41-43 but it’s very clear they play a lot better when at home, posting a 20-17 record. Monday marks the beginning of an eight-game homestand at loanDepot. After hosting the Pirates, the Phillies also come to town.

The Marlins just split a four-game set with the NL East-leading New York Mets, grabbing an essential victory in the finale on Sunday, winning 2-0. Sandy Alcantara, a -105 favorite in NL Cy Young odds, absolutely dominated in this one, tossing seven scoreless innings and striking out six. Miami scored both of their runs in the top of the 10th courtesy of some fantastic base-running from Billy Hamilton and a Luke Williams RBI single that drove in Jesus Sanchez.

You have two very unreliable arms on the mound here and Rogers owns an ERA of 7.98 at home this season. Between that and Pittsburgh’s recent success against the Marlins, I’m taking the underdog here on the moneyline. Great value.