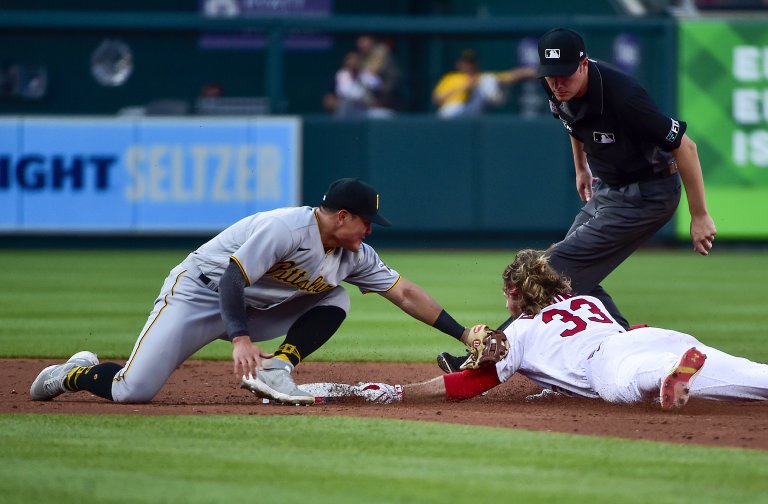 The St Louis Cardinals are -136 home favorites over the Pittsburgh Pirates in the opener of a day-night doubleheader on Tuesday, June 14
Entering this series, Pittsburgh was 9-7 straight up in the club’s last 16 games at St Louis
All of the Pirates vs Cardinals odds and best bets are analyzed in the story below

As they arrived at Busch Stadium for a four-game series against the St Louis Cardinals (34-27, 18-12 home), the bad news for the Pittsburgh Pirates (24-34, 11-17 away) was that they were 1-5 straight up against the Cardinals this season.

The good news is that one win came at St Louis.

In fact, the Bucs are much better off dealing with the Cards on the road than they are at home. Pittsburgh is 2-14 SU in the last 16 home games against St Louis. Over the past 16 games at Busch Stadium, the Pirates were 9-7 SU.

Still, oddsmakers are sticking with the home side in the opener of a day-night doubleheader between the two teams. St Louis is a -136 favorite. The Cardinals are also 5-1 against the runline when facing Pittsburgh this season.

First pitch at Busch Stadium is slated for 1:15 pm ET on Tuesday, June 14. In the weather forecast, there’s sunny skies, 6 mph wind and a scorching temperature of 100 degrees. At a favored moneyline of -136, St Louis is being given a 57.36% implied probability of victory in this game.

The division-leading Cardinals are the +275 second betting option in the NL Central odds. You’ll get +40000 odds on the Pirates to take the NL Central crown, should you be so bold. In the World Series odds, St Louis is the 12th option at a betting line of +3000.

Brubaker took the loss in a 9-0 setback to St Louis on April 7. Last season, Brubaker was 0-4 against the Cardinals with a 6.65.

The Cardinals are recalling rookie left-hander Matthew Liberatore from triple-A Memphis to pitch the opener of Tuesday’s twinbill. He’ll be making his fourth start of the season and first since June 2.

Life is tough for left-handed hitters when Matthew Liberatore is throwing his curveball like this pic.twitter.com/3UmXCWn2XB

Liberatore made his MLB debut on May 21 at Pittsburgh. He worked 4.2 innings, allowing seven hits and four earned runs. The rookie southpaw didn’t figure in the decision as the Cardinals won 5-4.

In Liberatore’s only previous start at Busch Stadium he worked five shutout innings of three-hit ball. He struck out six and got the win in an 8-3 verdict over the Milwaukee Brewers.

Looking at Brubaker’s underlying numbers, it’s not difficult to make a case that he’s been a hard-luck hurler this season. Pittsburgh is 5-7 in his 12 starts. That being said, he’s been beaten up badly over his career by St Louis.

Liberatore’s underlying numbers aren’t as good as Brubaker’s but there’s a common trait in their performances. A lot of runs cross the plate when they pitch.

Take the safe play here and go with the over.