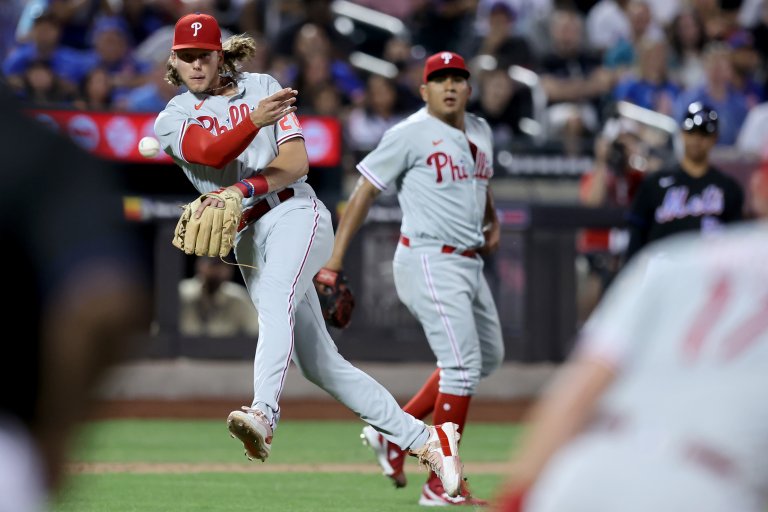 If the Philadelphia Phillies (63-51, 31-25 away) are going to hold on to the final Wild Card spot in the National League they’re going to have to start scoring a lot more runs. Easier said than done when your top-two sluggers are out of the lineup – more on that later.

Philly is fresh off scoring just two runs total in a three-game weekend set versus the New York Mets, and will look to get the bats going again on Monday against the Cincinnati Reds (46-68, 25-34 home)

Oddsmakers are expecting a Phillies bounce back, as Philadelphia is currently a -175 favorite over Cincy, in a game with total of 9.5. First pitch is scheduled for 6:40pm ET at the Great American Ball Park in Cincinnati, Ohio, with clear skies and 79 degree temperatures in the forecast.

The Phillies will give the ball to newcomer Noah Syndergaard. The 29-year-old has been a mixed bag since joining Philly at the deadline, yielding 17 hits and six runs over 11 innings, while striking out six.

2 Ks for Noah Syndergaard in the 5th pic.twitter.com/5MdfciRJyE

Syndergaard will make his 18th start of the season overall, his most since the 2019 campaign. He’s on pace for his lowest strikeout rate since entering the big leagues, but he’s done a much better job keeping the ball in the park. His home run rate per 9 innings is just 0.89 in 2022, the lowest it’s been since 2018.

Syndergaard had an up and down tenure with the LA Angels before joining Philly. He held enemy hitters to two runs or less in nine of 15 outings, but recorded only five quality starts. He’s got virtually no history against this version of the Reds lineup, but as we’ll explore they’re not exactly one to fear.

Cincy will counter with Mike Minor, who’s been one of the most beatable starting pitchers in baseball. The southpaw boasts a 1-9 record this season and hasn’t won in his last nine starts.

Last time out, the Mets shelled him for four runs and two homers over 5.1 innings marking the eighth time in 12 starts this season he’s allowed at least that many runs.

I will never understand the acquisition of Mike Minor for the 2022 Cincinnati Reds.

Minor has yet to face the Phillies this season and like Syndergaard has little experience versus this year’s version of his opponent’s lineup.

If there was ever a time to catch the Philadelphia lineup, now would be it. The Phillies are a top-10 World Series odds contender, in large part due to their offense. The bats have been quiet recently however, as they’ve been shutout in three of their past four games.

They’ve gone 2-for-28 over that span with runners in scoring position, while averaging just over eight hits per outing. In addition to losing last year’s NL MVP Bryce Harper, the team is also playing without slugger Kyle Schwarber.

The NL home run leader and longshot NL MVP odds contender is nursing a strained calf and his status for Monday is up in the air.

The Reds lineup on the other hand, exploded for eight runs on Sunday, their most in a game since July 30th. Despite the outburst expectations should be tempered for Monday’s outing.

They’d scored two runs or less in each of their previous five games, and are batting .216 over the past week. They also have a tougher time versus righties like Syndergaard than lefties, posting an OPS that is .33 points lower.

Given how poorly Minor has pitched this season the Phillies can definitely find success against the lefty even without their top-two bats. I wouldn’t pencil in a six or seven run performance, but they certainly won’t be held off the scoresheet again.

There should be a little less optimism for the Reds. Cincy is below average in runs scored per game, and ranks bottom-six in slugging and OPS. Just three of the Reds last 13 games have exceeded the total, while Cincy has scored three runs or fewer in nine of 12 August contests.