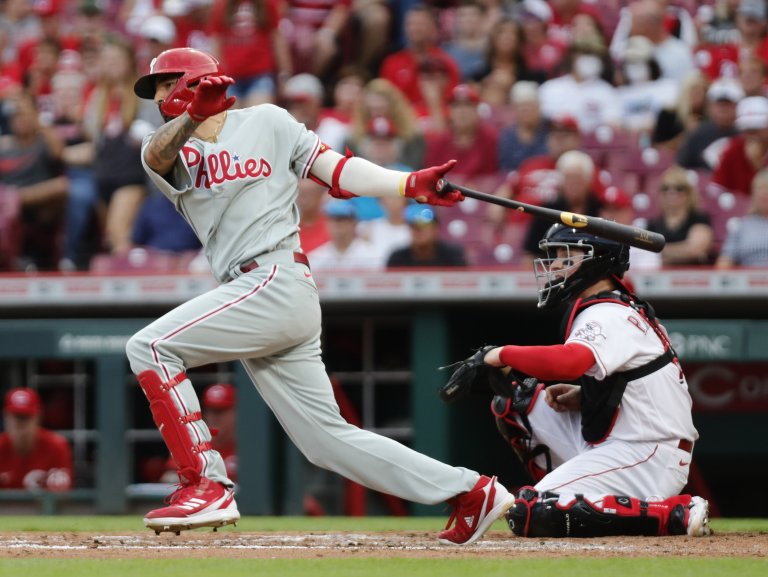 The Philadelphia Phillies are -190 road favorites over the Cincinnati Reds on Tuesday, August 16
Cincinnati is 9-6 straight in the past 15 home games against Philadelphia
Below, see the PHI vs CIN odds and picks

Philadelphia was 22-29, leading to manager Joe Girardi’s dismissal. The Phillies are 42-22 under Rob Thomson, Girardi’s replacement.

Cincinnati opened the season with a horrid 3-22 skid. The Reds are 42-47 since, climbing out of the NL Central basement.

Still, it’s the visiting Phillies that are drawing the fancy of the oddsmakers as these two club continue a three-game series. Philadelphia is a -190 road favorite. The Phillies are 12-13 against the run line as the away chalk.

First pitch at Great American Ball Park is set for 6:40pm ET on Tuesday, August 16. Cloudy skies with 10 mph wind and a temperature of 78 degrees are in the weather forecast.

Odds as of August 15 at Caesars Sportsbook.

At odds of -190, the Phillies have an implied probability of victory of 65.52% in the MLB betting line. A successful $10 wager on Philadelphia would deliver a payout of $15.30.

In the MLB Division odds, the betting line is displaying the Phillies as the +1000 third betting option to win the NL East. Cincinnati is the fifth betting choice at +30000 in the NL Central. The MLB pennant odds show Philadelphia at +1300 and the Reds at +100000. In the World Series odds, Philadelphia is +3500 and Cincinnati is +200000.

The Cincinnati debut of right-hander TJ Zeuch went about as well as perhaps could be expected from someone sporting a 6.70 ERA in Triple-A. Zeuch was shelled as the Reds lost 10-2 to the New York Mets on August 10.

Working four innings, Zeuch allowed six hits, including a homer, and six earned runs while walking two batters. He’ll be facing the Phillies for the first time as a big-league pitcher.

There’s some wild stuff going on with TJ Zeuch’s Sinker & Slider compared to his last MLB appearance in 2021.

Results haven’t been great, but process is interesting.

A 2016 first-round pick of the Toronto Blue Jays, Zeuch was with the St Louis Cardinals Triple-A club this season after being let go by Toronto. He was recently designated for assignment after posting an 11.64 ERA. The Reds put in a claim for Zeuch.

Zeuch last posted an MLB win on Sept. 21, 2020. He beat the New York Yankees in relief while with Toronto. He’s 0-3 with a 5.40 ERA in eight previous MLB appearances as a starting pitcher.

Phillies right-hander Kyle Gibson was an AL all-star last season. However, since the Phillies acquired him during the 2021 campaign, he’s treading water. Gibson is showing an 11-11 record for Philadelphia.

That pattern is persisting this season. Gibson is 1-1 in his last two decisions, 2-2 over the past four, 3-3 in six and 4-4 through eight.

Bases loaded and 0 outs Kyle Gibson gets out of the jam with no runs allowed! pic.twitter.com/nljndCyUCb

Gibson has gained decisions in each of his past five trips to the mound. He lost his last start to the Miami Marlins, so following the pattern, this start should be a win.

The veteran righty has allowed two earned runs or fewer in five of his last six starts. Gibson will be facing the Reds for the first time in his MLB career. Fittingly, Mr .500 is 41-41 with a 4.40 ERA in 130 career road appearances.

Cincinnati’s Jake Fraley is 1-for-1 when facing Gibson and that one hit was a solo home run. Donovan Solano of the Reds is 1-for-3 against Gibson.

No Phillies batter has ever faced Zeuch in an MLB game. Well familiar with the Reds from his days with the Chicago Cubs, Philadelphia’s Kyle Schwarber has homered 21 times in 71 games against Cincinnati.

The Reds are 1-6 SU over the past seven games. They dropped to 1-3 on their current six-game homestead. But they are 8-4 SU over the last 12 home games.

Holding down the final NL Wild Card spot, the Phillies are in the midst of playing seven of 10 against the Reds.