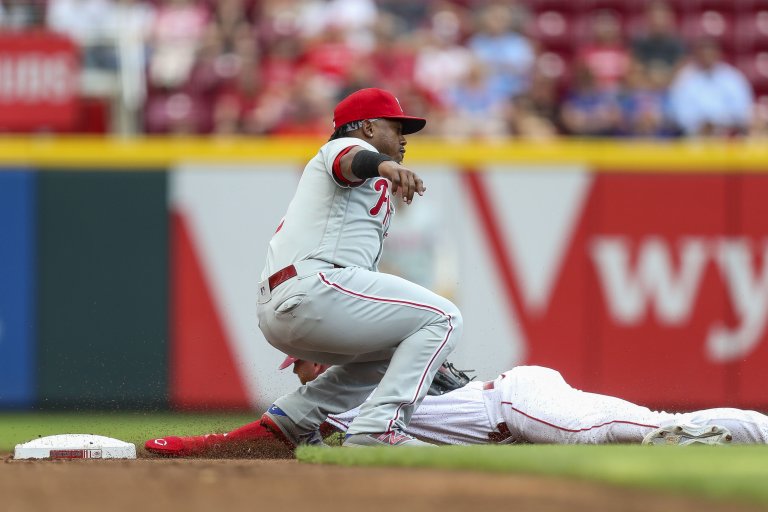 The Philadelphia Phillies are -160 road favorites over the Cincinnati Reds in a National League afternoon game slated for Wednesday, August 17
By winning the first two games of this three-game set, Philadelphia has won a series in Cincinnati for the first time since 2012
Below, see the Phillies vs Reds odds and best bets

It’s taken them a decade but the Philadelphia Phillies (65-51, 33-25 away) have finally got the better of the Cincinnati Reds (45-70, 25-36 home) on the road. Now, the question is whether the Phillies can sweep a series at Cincinnati for the first time since 2011.

Oddsmakers are liking the chances that Philadelphia will be getting out the brooms. The Phillies are established as -160 road favorites. The Reds are 15-25 straight up as a home underdog.

Odds as of August 16 at Caesars Sportsbook.

An 11-4 win on Tuesday, coupled with Monday’s 4-3 verdict, already renders Philadelphia the winner of this three-game series. That hadn’t happened since the Phillies took two of three at Cincinnati from Sept. 3-5, 2012. They’d gone 0-7-1 in their previous eight series at Cincinnati.

As they ready to play the final game of the set on Wednesday, the Phillies are looking for a road sweep over the Reds. That most recently occurred when Philadelphia ran the table in a four-game road series against the Reds from Aug. 29-Sept. 1, 2011.

First pitch at Great American Ball Park is set for 12:35pm ET on Wednesday, August 17. Mostly sunny skies with 8 mph wind and a temperature of 82 degrees are in the weather forecast.

At odds of -160, the Phillies have an implied probability of victory of 61.54% in the MLB betting line. A successful $10 wager on Philadelphia would deliver a payout of $16.30.

In the MLB Division odds, the betting line is displaying the Phillies as the +1000 third betting option to win the NL East. Cincinnati is the fifth betting choice at +30000 in the NL Central. The MLB pennant odds show Philadelphia at +1300 and the Reds at +100000. In the World Series odds, Philadelphia is +3500 and Cincinnati is +200000.

Wednesday’s MLB lineups show a showdown of southpaws in Cincy, as Ranger Suarez takes the mound for the Phillies against rookie Nick Lodolo of the Reds.

Suarez has taken a loss just once since June 13. He’s 4-1 over his past eight starts. Suarez ranks among the top 10% of MLB hurlers in hard hit percentage (30.9).

Ranger Suarez since coming off the IL

Phillies are 4-0 with him on the mound. pic.twitter.com/KC01Rxbaiw

Since returning from the IL (lower back spasms) on July 16, Suarez has been pitching lights out. Over his last five starts covering 28.3 innings of work, Suarez has allowed only four earned runs. That works out to an ERA of 1.27.

Reds rookie left-hander Lodolo is like a lot of Cincinnati’s young pitchers. He’s erratic. In 10 starts, Lodolo has allowed fewer than three earned runs four times. He’s surrendered three or more earned runs in each of his other six starts, including the last two.

In four starts, Lodolo has failed to make it through the fifth inning. That also includes his last two trips to the bump. Lodolo ranks among the bottom 5% of MLB pitchers in wOBA (.372).

Nick Lodolo ends his night with his 6th K pic.twitter.com/JJV1q1kgPQ

Control is also an issue for him. Over his last 9.1 innings of work, Lodolo has walked eight and hit two batters.

Where were you during the Edmundo Sosa game?! pic.twitter.com/15SFgbeZYJ

Cincinnati’s Nick Senzel is 1-for-1 (1.000) batting against Suarez. Joey Votto (1-for-6, .167) is the only other Reds player to hit safely against the Phillies pitcher.

Along with his spectacular recency, solid day-game stats and unbeaten status when facing the Reds, the Phillies are also 14-6 this season in games started by Suarez.

Phillies win their 10,000th game in franchise history! They will have a chance to sweep the Reds tomorrow afternoon! pic.twitter.com/CxY6ny1hr9

The Reds are 1-7 SU over the past eight games and 1-4 on their current six-game homestead.