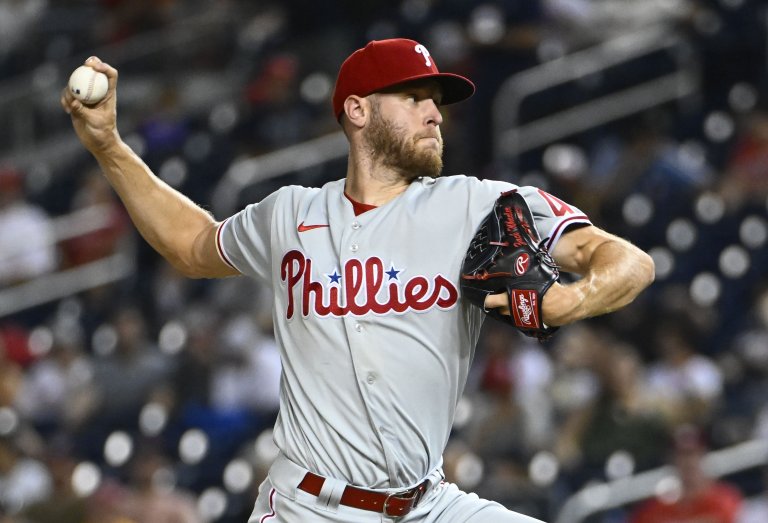 The Phillies and Rangers wrap up a quick two-game set on Wednesday afternoon
Zack Wheeler clashes with Jon Gray on the hill
Find the odds, lines, preview, and picks below

The Philadelphia Phillies conclude their interleague matchup with the Texas Rangers on Wednesday afternoon. The first pitch is scheduled for 4:05 PM ET at Globe Life Field in Arlington.

Philly’s ace takes the mound here as Zack Wheeler gets the ball. For the Rangers, they counter with right-hander Jon Gray.

Ahead of Tuesday’s series opener, Texas has won seven in a row against the Phillies. However, the Rangers are  +125 underdogs here.

Wheeler has been phenomenal for the Phils in 2022, leading the rotation with a 6-3 record and stout 2.69 ERA. In 70.1 innings, he’s struck out 78 and only walked 14 batters. Also, Wheeler has managed to pitch at least six frames in each of his last six starts, giving his team tons of longevity. He’s also at +1300 in NL Cy Young odds.

Pretty safe to say he’s re-entered the Cy Young conversation. Sandy Alcantara is obviously leading the pack by a wide margin, but Wheels has really turned a corner.

In the righty’s most recent outing, he allowed just one run across seven innings against the Nationals, limiting them to four hits en route to collecting his sixth win of the campaign. Wheeler has also dominated vs. Texas, compiling a 0.86 ERA in three career starts.

Gray meanwhile is in the midst of a respectable first season with the Rangers. He owns a 4.27 ERA in 11 starts, but his command is relatively shaky. The former Rockies starter has surrendered 22 walks in 59 innings of work. However, he’s managed to sit down 63 hitters via the strikeout.

While the ERA isn’t fantastic, Gray is pitching very well across his last two starts, tossing a combined 13 innings and giving up just one run. On June 17th versus Detroit, Gray threw seven scoreless frames. He’ll be looking to build off that on Wednesday against a Phillies team that hits him pretty hard. Gray has compiled a 4.29 ERA vs. Philly in nine career starts.

Ever since Philadelphia fired Joe Girardi, they’ve been a whole different ballclub. The Phillies are up to 36-32 but still eight games out of first place in the NL East. Nevertheless, the way this group is winning right now is impressive. Philly just took four out of five from Washington and has actually won five straight series.

The offense is hitting .263 in June alone and scoring runs at a premium. The staff is also picking up their act, posting a 3.53 ERA this month. After leaving Texas the Phils head to San Diego for a tough four-game set. It will be a very good test for them.

The Rangers made a huge splash in the winter, spending millions to sign both Corey Seager and Marcus Semien to give them an All-Star duo up the middle. Unfortunately, they’ve struggled to produce with their new team. Semien is hitting just .223 while Seager is at .230.

On both sides of the ball, Texas is honestly just not living up to expectations. Prior to Tuesday, the Rangers have lost two consecutive contests to the Tigers and sit five games below .500. They’re also 14-17 at home, with their next four matchups at Globe Life.

This one is a no-brainer. Wheeler is lights out in 22′ and he absolutely dices against the Rangers with an ERA under one. Expect him to pitch deep into the game again and the Phils’ bats to score their fair share of runs off Gray.