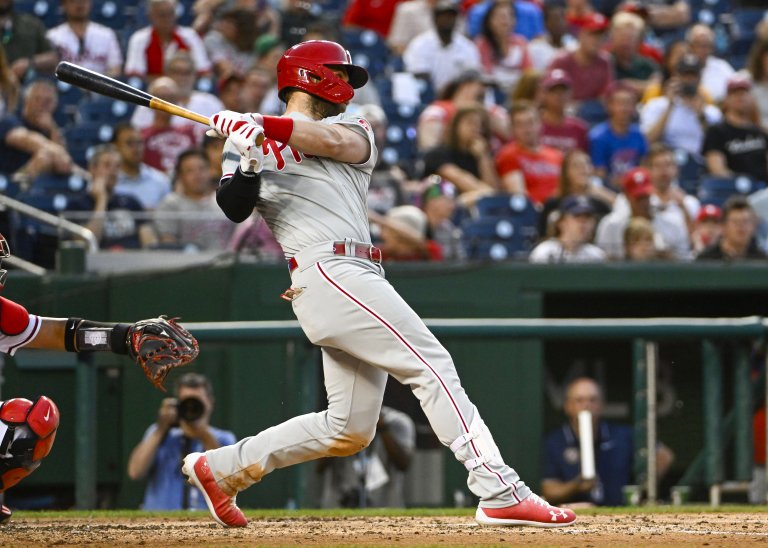 The Phillies and Nationals continue their four-game set on Friday afternoon
Ranger Suarez faces Joan Adon on the hill
The Phillies vs Nationals odds, preview, and prediction can be found below

NL East rivals will battle it out again on Friday as the Philadelphia Phillies visit the Washington Nationals for an afternoon matchup. The first pitch is scheduled for 7:05 PM ET at Nationals Park.

The Phils will send Ranger Suarez to the mound here. Washington counters with the struggling Joan Adon.

Odds as of June 17th at Caesars.

The Phillies are a heavy -210 favorite for this contest.

Suarez isn’t enjoying the best campaign for Philadelphia. In 12 starts, he’s 4-4 with a 4.40 ERA. The southpaw has struggled to consistently throw strikes, allowing 26 free passes in just 59.1 innings. His command once again proved to be a problem in his last outing, surrendering four walks in 4.1 frames and allowing four runs (two earned).

Something is up with Ranger Suàrez.

The thing he did best last year was fill the zone with strikes, and attack hitters constantly. We have yet to see that version of him in 2022.

However, Suarez was rather effective in his two starts prior to that, giving up only four earned runs combined. He’s yet to face the Nats in 2022, but the 26-year-old owns a 1.42 ERA against them in eight career appearances.

It’s hard to imagine Adon’s first full season in the big leagues could go any worse. The big right-hander is an atrocious 1-10 while posting a 6.95 ERA. There is no question his control is a huge problem, walking 34 in 55.2 frames, but Adon is also getting lit up. On June 7th, his most recent outing before getting demoted to Triple-A, the Dominican got tattooed by the Marlins, allowing eight earned runs before being chased after three innings.

Joan Adon is in the clubhouse. Makes sense for him to start tomorrow since he was on schedule for Friday in AAA.

Friday is whole new territory for Adon, though. He’s never taken the mound against the Phillies but considering the type of imposing bats they have in their lineup, he will need to be careful, or else it could turn out to be another dreadful start.

Who would’ve known firing Joe Girardi was the answer to Philly turning things around. Since parting ways with the manager on June 3rd, the Phillies have won 12 of 14 games, including an eight-game winning streak after his departure. The pitching staff has improved drastically and owns a 3.46 ERA in June so far, but it’s the bats that are really flourishing.

As a group this month prior to Thursday’s contest, Philadelphia is hitting .283 with 25 homers and an OPS of .876. Bryce Harper and Rhys Hoskins in particular are absolutely raking, both batting .350 in mid-way through June. Harper is even in the NL MVP odds mix at +750.

There is basically nothing to be happy about in DC. The Nats are one of the worst teams in baseball with a 23-43 record, which is last in the National League East. They’ve lost five in a row but surprisingly, the offense has actually been a bright spot in certain areas. Washington ranks top-10 in average, hits, and OBP.

That being said, the Nats are struggling to actually capitalize on their opportunities, scoring only 4.1 runs per game. That’s 23rd in the Majors. When it comes to pitching, well, every start owns an ERA well over four. Adon is also one of their most inconsistent arms.

This is a no-brainer pick. Suarez has enjoyed some success against the Nats and Philadelphia is completely dominating Washington in recent memory. The Phillies will continue to roll and grab another victory.