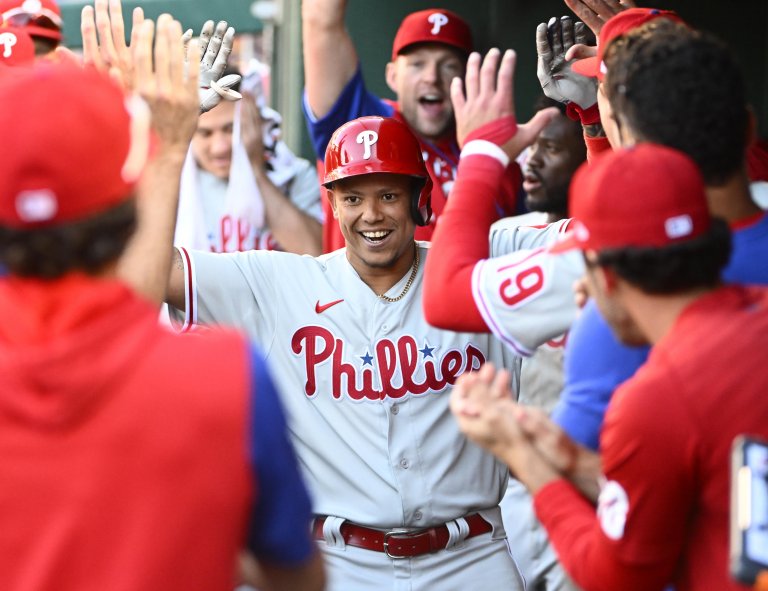 Make it 12 straight wins for the Phillies over the Nationals and counting. A day after sweeping their doubleheader, Philadelphia snuck by Washington in extra innings on Saturday and will now look to complete the rare five-game sweep of their NL East rival on Sunday.

The Phillies opened as -165 moneyline favorites in a contest that features a total of 9.5. First pitch is scheduled for 12:05pm ET at Nationals Park in Washington, DC, with sunshine and 71 degree game-time temperatures in the forecast.

Philadelphia remains a +3500 longshot in the World Series odds, despite winning 15 of their last 17. They’ll give the ball to Zach Eflin on Sunday, who’s looking to bounce back from a tough outing. Eflin coughed up five hits, four runs and two homers to Miami in his last start, after pitching very well in his previous two appearances.

Eflin serves up a meatball and Jesus Aguilar doesn’t miss it pic.twitter.com/3KRSDT4Ohw

He yielded just a single run total in those starts to the Brewers and Angels, while striking out eight over 12 innings. He’s yet to face the Nationals this season, although he didn’t have too much success against them last year. He surrendered seven hits, five runs and two homers in his lone meeting with them in 2021, picking up a loss along the way.

Washington, who enters play having dropped 11 of their last 13, will give the ball to Jackson Tetreault. The rookie will make his second start of the season, and it can’t possible go worse than his first.

Facing the defending champs in his debut, he allowed nine hits, seven runs and three homers in only 4 innings of work. The 26-year-old made 12 starts at Triple-A Rochester before his promotion, posting a 5-3 record with a 4.25 ERA.

He’s hardly a pitcher to fear if you’re a Phillies backer, and he’s going to have his hands full with one of baseball’s best lineups.

Philadelphia’s offense has been red hot during this impressive 17 game stretch, averaging 6.17 runs per game. They’ve crossed the plate 25 times so far in this series, and enter play ranked top-4 in MLB in runs per game, slugging percentage and OPS.

The lineup is once again being paced by NL MVP odds contender Bryce Harper, who boasts an impressive 2.7 WAR through 60 games. Harper isn’t the only Philly tearing the cover off the ball however, as he’s one of four regulars with a slugging percentage north of .460.

Umpire makes a terrible strike call to keep pinch-hitting Bryce Harper at the plate so he sends the next pitch into the gap for a game-tying double pic.twitter.com/nyHxxaES38

Washington, on the other hand, has been one of the weakest lineups in baseball this season, but they’ve finally started to show signs of life. They’re averaging 4.6 runs per game over the past two weeks, with a .259 batting average, a .411 slugging percentage and a .733 OPS.

All of those numbers are significantly better than their season-long marks, which should give over bettors optimism that they can do their part to take this game over the total.

PHI vs WAS Last 10 Meetings

Given the pitching matchup and the way Philadelphia is swinging the bats, 9.5 runs is simply too low for this matchup. The Phillies are more than capable of eclipsing that mark on their own, like they’ve done three times already this month, but it doesn’t hurt that these two teams have a history of playing high scoring games.

Seven of their past nine meetings have reached double digit runs, including two this weekend. Nineteen of Philly’s past 28 games have cleared the total, and I like Sunday’s matchup to do so as well.