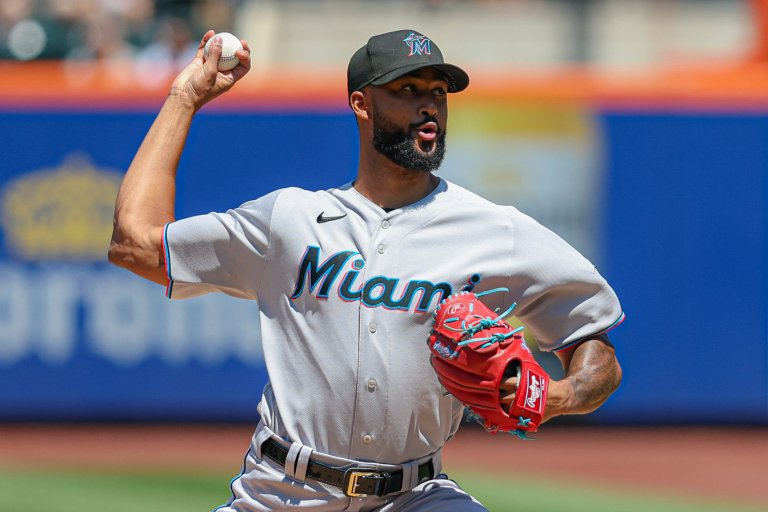 The Marlins are -165 home favorites over the Phillies on Friday night
Kyle Gibson (4-3, 4.53) will start for Philadelphia against Sandy Alcantara (9-3, 1.73)
A look at the Phillies vs Marlins odds can be found below with a pick

The Phillies (46-43, 22-22 road) are on a four-game losing streak. They were off Thursday after being swept in a two-game series by the Blue Jays in Toronto, including losing 8-2 on Wednesday.

Odds as of July 14th at Caesars Sportsbook.

The loanDepot Park roof will likely be closed as there is a 50% chance of showers and thunderstorms.

Kyle Gibson (4-3, 4.53) is scheduled to pitch for the Phillies against Sandy Alcantara (9-3, 1.73). Gibson will be working on five days of rest and Alcantara on four. Alcantara is the favorite in the National League Cy Young Award odds at -105.

Gibson is winless in his last five starts, notching an 0-1 record and 4.82 ERA.

However, he pitched seven scoreless innings against the Cardinals last Saturday in a no-decision at St. Louis. He surrendered just two hits and did not walk a batter while striking out five.

The Marlins have given Gibson fits as he is 0-2 against them in three career starts with a 6.50 ERA. He has lost both starts at loanDepot Park while compiling a 10.80 ERA.

Last Sunday, Alcantara pitched seven scoreless innings against the Mets in New York but did not factor in the decision. He allowed six hits, struck out four and walked one.

Phillies slugger Kyle Schwarber is 4 for 13 (.308) with two doubles against Alcantara but rookie Bryson Stott is 0-for-6.

Brian Anderson’s two-run triple in the bottom of the 11th inning won it for the Marlins over the Pirates on Thursday.

Andy got the treasure pic.twitter.com/5FlrQeEghW

Both Marlins middle infielders left the game early. Second baseman Jon Berti was removed in the second inning with a mild groin struck and shortstop Miguel Rojas exited in the ninth after being struck in the head while tagging out the Pirates’ Oneil Cruz.

Berti and Rojas are considered questionable for Friday.

Marlins designated hitter Garrett Cooper did not start for a second straight game because of a bruised left knee and center fielder Jesus Sanchez was a late scratch because of a personal reason. Both entered the game in the late innings.

Stott accounted for all the Phillies’ scoring with a two-run homer Wednesday in their loss to the Blue Jays. That was just one of two hits for Philadelphia.

Catcher J.T. Realmuto and third baseman Alec Bohm will return to the active roster Friday. Both were placed on the restricted list for the two-game series in Toronto as they were unable to enter Canada because of their vaccination status.

“I’m not going to let Canada tell me what I do or don’t put in my body.” – JT Realmuto#RingTheBell | #BCIB pic.twitter.com/dDzsPWI4an

The Marlins have won four of seven games from the Phillies this season and the teams split a four-game series in April at loanDepot Park.

Miami is 31-24 against Philadelphia since the start of the 2019 season.

Alcantara is the NL Cy Young favorite for a reason and it’s hard to bet him against, even at a high price.