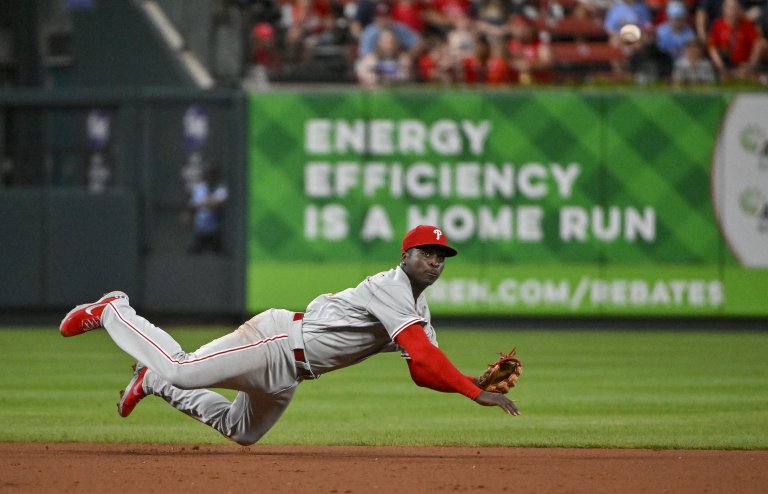 The Cardinals are -115 home favorites over the Phillies on Saturday
Kyle Gibson (4-3, 4.91) will pitch for Philadelphia against Dakota Hudson (6-5, 4.29)
A look at the matchup and odds can be found below with a pick

The visiting Philadelphia Phillies and St. Louis Cardinals square off at 2:10 p.m. ET Saturday at Busch Stadium in the second game of a four-game series.

Odds as of July 8th at BetMGM Sportsbook.

The weather forecast calls for sunny skies at gametime with a high temperature of 84 degrees and wind from the northeast at 10-13 mph.

Gibson has struggled lately, going 0-1 with a 6.43 ERA in his last four starts and getting hit hard by the Cardinals in his most recent outing.

Last Saturday in Philadelphia, Gibson surrendered six runs and seven hits in four innings while walking two and striking out two. He is now 0-1 with an 8.10 ERA in two career starts against the Cardinals.

So the Cardinals have tied a major league record with 4 straight home runs off Kyle Gibson ?

Gibson’s lone start at Busch Stadium came in 2015 and he took the loss, giving up three runs in six innings.

Hudson was rocked by the Braves on Monday in Atlanta, giving up six runs and nine hits in four innings. He walked three and struck out two.

Hudson has made two career starts versus the Phillies, going 1-1 with a 2.45 ERA.

A segment of Cardinals’ fans seems just a little bit down on Hudson.

The Phillies’ Kyle Schwarber is 2 for 5 with two doubles and three walks in eight plate appearances against Hudson but Nick Castellanos is 1 for 9 with a double. Albert Pujols has homered three times off Gibson while going 6 for 30.

The Phillies’ Alec Bohm accounted for all the game’s scoring Friday night with a pair of solo home runs.

Bohm connected in the sixth and eighth innings off Adam Wainwright. The third baseman had two of the Phillies’ five hits.

The Phillies brought right-handed reliever Michael Kelly up from Triple-A Lehigh Valley prior to the game and designated left-hander Sam Clay for assignment.

The Cardinals got two hits each from Paul Goldschmidt and Nolan Arenado. Goldschmidt is favored at +100 in the National League MVP odds.

St. Louis reinstated left-handed reliever Genesis Cabrera from the COVID-19 injured list Friday. Outfielder Corey Dickerson is expected to be activated from the IL for Saturday’s game after being out since June 5 with a strained left calf.

If he comes off the IL, Dickerson will be facing one of his former teams.

The Phillies have taken three of four from the Cardinals this year and have a 15-9 edge in the series since the start of the 2018 season.

In a matchup of two struggling pitchers, let’s give the lean to the well-rested Gibson who has been given extra time between starts to work on mechanical issues.